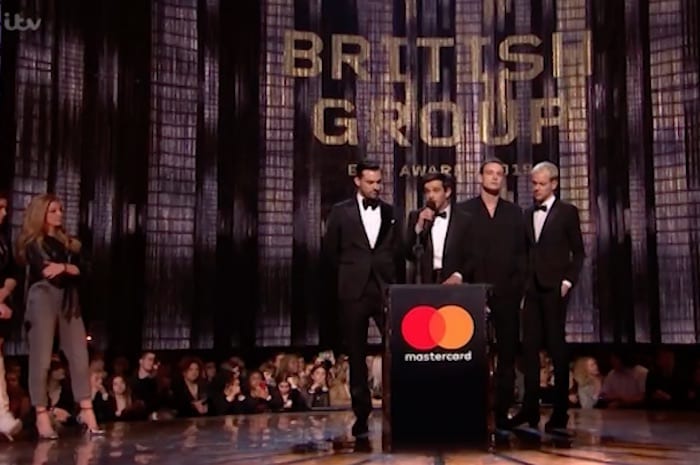 Indie band The 1975 were the big winners at this year’s Brit Awards – and also gave the standout performance of the night.

The chart-topping band, who first formed after meeting at Wilmslow High School back in 2002, won Best British Band and Best Album at the music industry ceremony in London on Wednesday night.

And frontman Matt Healy has been praised for using his speech in accepting the first of the two awards to call out misogyny in the music industry.

He quoted from a report from The Guardian journalist Laura Snapes, saying: “I just want you to listen to me for one sec, just a couple of sentences that a friend of ours Laura Snapes said this and we should all really think about it.  She said that in music: ‘male misogynist acts are examined for nuance and examined as traits of difficult artists, while women and those who call them out are treated as hysterics who don’t understand art.'”

They later performed a brilliant version of Sincerity Is Scary at the close of the show, with Matt donning a quirky bunny eared hat and backpack as he walked on a treadmill.

The band, all wearing smart black tux suits for the occasion, were the big winners on the night with their two gongs after the success of their 2018 album A Brief Inquiry into Online Relationships.

There was also success for former Manchester-based singer songwriter Tom Walker who won the British Breakthrough category, and gave an emotional speech thanking his gran!

What a time to be alive!!! Thank you to every, single, beautiful person who took the time to vote for me for @BRITs British Breakthrough Act… WE ONLY WENT AND BLOODY WON IT!!! 😂👌 Right best get to bed pic.twitter.com/0qwcaIYgVN

Tom, who releases his aptly-titled debut album What a Time to Be Alive on March 1st, will perform an intimate and exclusive gig in Manchester on Sunday March 3rd at a secret location in association with Hits Radio.

The Global Success award went to Ed Sheeran, while American artist Pink was given the lifetime achievement award and performed at the finale of the night.

The show was opened by Hugh Jackman who gave audiences a taste of what is to come with his upcoming live tour which will start its UK leg right here in Manchester in May.