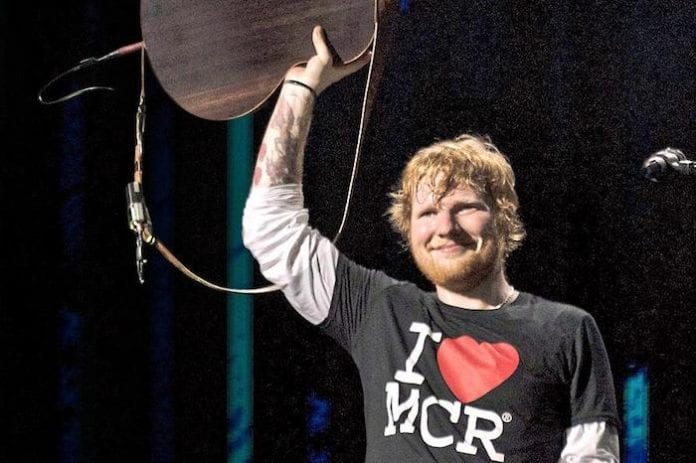 Who doesn’t love Ed Sheeran? Nobody. And when we receive a call from his agent to declare his desire to wear our t-shirt at his upcoming Manchester gigs to show his love and affection for our fair city, we loved him just a little bit more.

“Can he have four mediums in black please?” Asked agent Amanda. “He truly wants to show his support for Manchester on stage and can’t think of a better way.” They paid full price for the shirts which includes a donation to We Love MCR Charity.

I know you all say he looks like me and ‘ha ha I wouldn’t mind his wallet or his talent’ but let me tell you @edsheeran has just purchased @ILoveMCR t-shirts to wear at his upcoming @EtihadStadiumAU gigs. Plus a donation to our sister charity. Another #ILoveMCR goal ❤️ 🎤 pic.twitter.com/LxWC5QcdvC

Ed Sheeran chose the iconic logo – which has become a symbol of unity and civic pride for the city – to coincide with the first anniversary of the terror attack which killed 22 people attending an Ariana Grande concert.

To pay tribute to the victims, Sheeran wore an ‘I Love MCR’ t-shirt during his first show at Manchester’s Etihad Stadium last night.

Nice one for wearing the tee and showing the love @edsheeran 😘🙌 pic.twitter.com/gPX7knVqGP

The iconic shirt resonates with the atmosphere amongst the people of Manchester still brooding in the aftermath of the attack.

Last night was Ed Sheeran’s first of four gigs at the Etihad Stadium as part of his UK tour. Amanda sent us a further request this morning for eight more t-shirts.

Ed will continue on to perform in Newcastle, Glasgow and Wembley – but we don’t expect him to continue wear the I Love MCR t-shirt.