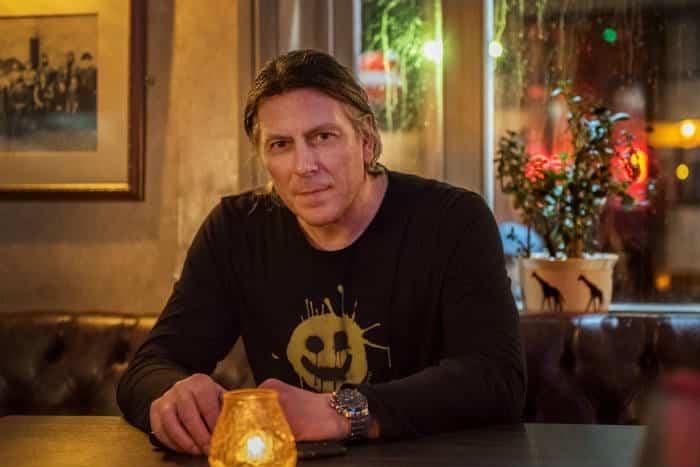 Steven J. Gill loves his music. In the early 1990s he managed a few bands with a little success, but gave it up to pursue a more sensible career.

Thirty years later and he has just published his first book, The Rock ‘n’ The Roll. ‘N’ That, a rollicking ride-along Manchester-based novel about the discovery of the next greatest band on the planet and how a 40-something suffering a mid-life crisis takes the punt that propels them to superstardom.

For anyone who has lived in Manchester in the last thirty years, the book is full of references to the city’s amazing nightspots, old and new, existing and lost.

It’s a story that has been years in the making.

“I had an idea kicking around for ages,” Steven explains.

“I went to the inaugural Festival Number 6 in North Wales, really just a Manchester-by-the-sea kind of weekend, and saw a friend of mine doing a reading on the literary stage.

“It sparked something in me. I know it sounds clichéd, but I felt suitably inspired to start work on it when I got home.”

But autobiographical it is not.

Steven, who has spent his entire life in Manchester, readily accepts the suggestion given his early music management career, but insists that is where the similarity ends.

None of the characters are based on real people, so how do you come up with a completely invented band when there are so many real-life stories about Manchester’s great bands, particularly from the early 1990s?

“The way I approached it was a little bit like creating a fantasy football team,” Steven says.

“You know what you need – a good defence, match-winning playmaker – and it is how you pick those square pegs for square holes.

“It was great that I could create these characters and look at bands that I have loved and seen and appropriate certain elements from them without making it obvious who they were.

“But hand on heart I can truthfully say I have not created facsimiles or given knowing winks or nods to any actual musicians or bands that I have met or worked with or, just as a fan, loved.

“And since it’s been published, the thing that has pleased me most is that it has wrongfooted people. They were expecting a photocopy of certain Manchester bands and reruns of well-trodden anecdotes, but the idea was to avoid all of those clichés.

“It’s basically a story about the ‘next big thing’ in terms of a band, but from the viewpoint of the manager who makes a huge decision at the age of forty to follow his dreams.

“It really is a bit like a play on the idea of a debut album that gives them their big break, and how the second one makes them go stratospheric. You can see the story arc and the narrative of how fame burns everybody up, but it’s quite a journey to get there.”

For someone who wrote the entire book in secret, Steven has been amazed by the response.

“Nobody knew I was writing it. I kept it absolutely to myself. It was a folder on my laptop that potentially was never going to see the light of day. But then I told one of my best mates that I’d done it and it spiralled.

“I got some help and advice and, with a bit of editing and polishing, had the finished product. Once word got out, friends started to badger me, asking to read it.

“I have since learned that you’ll usually get a pat on the back from friends and family, and that’s very nice of them, but once they have read it you can see this look in their eyes and you know they thought it was really good.

“Having never done anything creative before, and certainly nothing approaching this, to be able to then palpably tell when people have enjoyed it rather than just receiving their platitudes, is an interesting thing to observe.

“It’s a brilliant feeling. I’m so pleased with the reception and I hope it gets a bigger audience because I do believe there is mass appeal to it.

“It has given me confidence. In dead simple terms, I now know I can write. The gratification of strangers is the best watermark you can get, because they have no loyalty one way or the other.”

With that new-found confidence Steven has moved onto his next book. And he is very excited about it.

“I’ve made progress, especially during lockdown. And I think I’m really onto something with this one.

“It’s not so much of an obvious crowd pleaser as The Rock ‘n’ The Roll. ‘N’ That, but it is set in Manchester and starts in the early 1980s. It’s a story that covers four generations with three friends as the main characters, and the gravitational pull that friendships and hometowns have on people.

“It’s ambitious and it’s non-linear, so you can sort of shuffle the chapters like a deck of cards. I’m delighted with it and I just want to get it finished. I hope to have it done by the end of the year; that’s a realistic target.”

The Rock ‘n’ The Roll. ‘N’ That by Steven J Gill is available from Amazon and stevenjgill.co.uk.