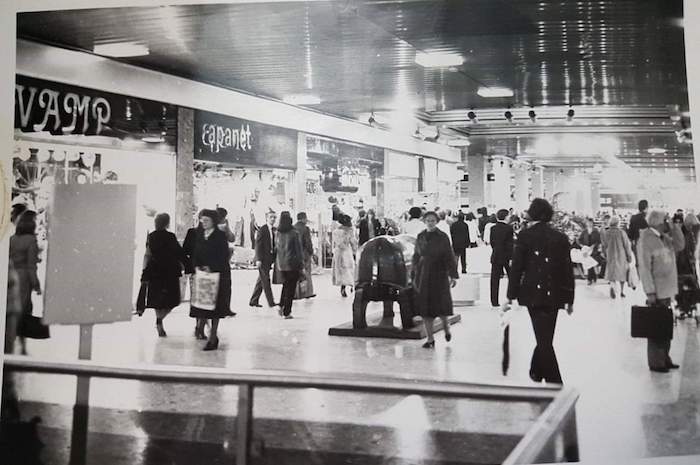 Today marks 40 years since the Manchester Arndale shopping centre was officially opened back on May 31st 1979 by HRH Princess Anne.

And celebrating the past 40 years has been making our readers feel rather nostalgic, ever since we shared our feature on the history of the centre earlier this week, and how it has changed over those four decades.  You’ve been sharing your memories on our Facebook page and we’ve loved reading them so much we thought we’d share some of the best ones here.

The shops we loved and lost

Having been a stalwart of the region’s shopping scene for 40 years, the Arndale has hosted many of the UK’s biggest high street names, as well as quirkier stores that have been lost in the mists of time.  People fondly remember shopping at the old C&A, Dolcis and Chelsea Girl. Ami Clair Simon said: “I loved Dolcis back in the day! Everyone had school shoes from there!”

The wooden rhinos – or were they elephants?

Lots of our readers have special memories of wooden animal sculptures that appeared in the centre in the 1970s and 80s.  Many of you remember a wooden rhino, although some seemed to think it was an elephant.  We’ve asked the Arndale and they have provided us with these photos (above) and, at the top of the page, the back end of one such creature. We think it’s pretty rhino-like on this evidence.   Margaret Rann said: “The animals outside Mothercare, the kiddies loved them.” Caroline Patten said: “Does anyone remember the big wooden rhino?? You used to be able to climb inside it.”

Before it become what we see today, the Arndale Food Court was known as Voyagers. And lots of you still refer to it as that to this day.  The escalators on Market Street were the main route up there, and used to have big old Voyagers signs too.

It first opened as a £9m project in 1991 proving a real hit with shoppers in what was a halcyon era for the centre.  It certainly resonated with our readers.  Janet Davis wrote: “Yes! I still call the foodcourt Voyagers!!”

Quite a few of you remember an actual bird aviary inside the Arndale Centre.  It was based near to the old bus station side of the Arndale on Cannon Street.  Alas, we’ve been unable to trace any photos, so if you have one do get in touch.

It’s hard to believe that there was a massive underground market space that no longer seems to exist next to the Arndale.  The main access was via escalators on Brown Street, where the Tesco store currently stands on Market Street.  Readers remember heading down there for all sorts of fashion bargains. Reader Sam Leonard recalled: “Loved Dolcis and underground market where I purchased my Bros badges.”

The market closed in the late 80s as the main Arndale grew in popularity.  And of course it now has its own burgeoning market hall with local food and drink and retail stalls off High Street.

And of course those infamous tiles…

The unique cladding of the centre, with those buff yellow tiles, inspired plenty of unflattering comments over the years, including one wag hailing it: “the longest lavatory wall in Europe.”

Bev Mander recalled: “I always used to think the Arndale looked like a huge bathroom cos of all the tiles on the outside!” While Alison Claxton wrote: “One thing certainly hasn’t changed. The tower still looks like a god-sized urinal!”

In fairness, the majority of the tiles were removed amid the extensive refurbishment following the devastating 1996 IRA bomb.  And today’s Arndale is fronted by the light and airy glass-fronted New Cannon Street.

What are your favourite memories from the Manchester Arndale Centre?  Leave your comments below or on our Facebook page at I Love MCR.