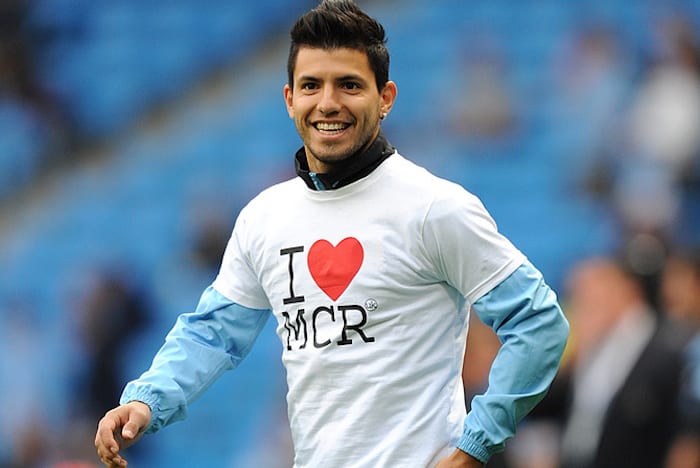 Six years ago Manchester City fans were excited by the latest acquisition in the effort to establish the club as one of the best in Europe. We thought we had bought someone special. We were right.

Enter Sergio ‘Kun’ Aguero from Athetico Madrid to chants of “You signed Phil Jones we signed Kun Aguero” – a cheeky dig at the neighbour’s latest purchase in comparison to our own.

Many players join the Premier League with a big reputation and struggle to make an impact in the much faster paced, more physical Premier League.

Aguero was not such a player.

On a Monday night in 2011 with Man City leading 1-0 against Swansea at the Etihad with approximately two thirds of the game gone, he announced himself to the City fans with a memorable debut.

Converting from close range following a Micah Richards cross, Kun opened his City account then turned provider for David Silva with a skilful flick over the head from the byline back into the box. He capped off cap off a terrific performance with a 30 yard screamer.

Fast forward to the present day and he is set to become City’s all time top goal scorer when he returns from injury. He is currently one goal short of equalling Eric Brooks record of 177 goals in 491 games set back in 1939. Aguero has scored 176 in 261 games.

The 2016/17 club awards saw defender Vincent Kompany beat the sensational striker to the goal of the season with an absolute rocket against Crystal Palace – a goal that Aguero himself would have been proud of.

There are many attributes which make up a truly great player. An obvious one for a striker is the number of goals scored each season.

Sergio is certainly not short on goal scoring ability but when Pep Guardiola took charge last season, there seemed to be a shift in favour of Gabriel Jesus.

This led to increased speculation of Aguero leaving the club in the summer with a host of big clubs worldwide keeping a keen eye on the situation.

With the situation on the Argentine’s future unclear in the summer, Gabriel Jesus came out and stated he wanted his strike partner to stay at the club.

The speculation surrounding the striker leaving City is nothing new. It seems every season since he joined, the media have linked him with a move away from the Etihad. But each season Aguero has showed his loyalty to the Blues – another quality of a truly great player.

Pep stated that simply scoring goals wasn’t enough. He felt Aguero needed to do more – track back when losing possession and generally work harder for the team.

Many City fans and certainly myself were shocked by this. I’d have understood more if Aguero wasn’t working hard for the team and scoring less frequently but surely his goal ratio speaks for itself.

This season, we are seeing an improved Sergio Aguero on the pitch and maybe we have Pep to thank for that. Having scored seven goals in eight appearances, he is not only carrying on his terrific goal scoring record but he is impressing in other areas of his game, too.

Several times this season we have seen him chase lost balls, fight for possession high up the pitch and, perhaps most satisfyingly, create chances for others, already equalling his number of assists from last season with three to his name so far.

The most notable came in the 5-0 thrashing of Liverpool when, clean through on goal with only the keeper to beat, he spotted Jesus in a better position. The Brazillian rolled it home for City’s third goal.

Recently Aguero stated he felt a special bond with the City faithful – probably not surprising considering the events of May 13 2012 when he wrote himself into the history books with a last second winner against QPR to snatch the title away from rivals United.

Having been in the stands that day and being subjected to a roller coaster of emotions, our 44 year wait for a league title finally came to an end in spectacular fashion and a true City legend was born.

Following his sixth Premier League hat-trick in the 6-0 victory over Watford, Guardiola lavished praise on his striker when the subject of the goal scoring record was brought up.

“Hopefully that will happen very soon, and hopefully we can have a big celebration,” said Guardiola.

“Hopefully the club can do that one day soon in the stadium at the game. He’s a legend, and it’s a part of history in the club.”