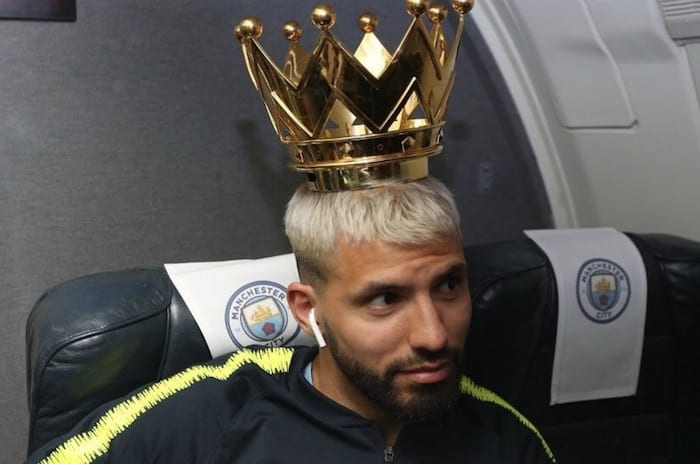 The final day of the 2018/19 Premier League season would see either Liverpool lift the trophy after a twenty-nine year wait or Manchester City become the first team in over a decade to win back-to-back Premier League trophies.

When the news that Liverpool had gone in front against Wolves was compounded by Brighton taking the lead, completely against the run of play, it looked as though it was going to be one of those days.

But pretty much immediately City were back level when Sergio Aguero latched onto a David Silva flick and fired through the Brighton keeper’s legs.

The game was put beyond doubt in the second half with two fantastic strikes from Riyad Mahrez and Ilkay Gundogan ensuring the trophy would remain at the Etihad for another season.

In the end the title was decided by a single point between City on 98 points and Liverpool finishing with 97 points – a tally that would have seen them lift the trophy in any other season – except the last two when City have recorded 198 points in total.

Today is gonna be the day 🎶💙 pic.twitter.com/4NYMooFdJV

Had Mahrez not missed a penalty when the two sides met earlier in the season at Anfield it would not only have broken the jinx of not winning at their stadium but would have seen City reach 100 points for the second season running.

There have been many stand-out performances from several of the City squad over the course of the season but what was really enjoyable to watch was seeing captain Vincent Kompany finishing the season strongly having been hampered by injury problems for a long while.

Kompany featured in the starting line-up following last Monday’s super strike which kept City one point ahead of rivals Liverpool going into the final day and was substituted with only a few minutes remaining – and as you would expect got a standing ovation from the City faithful.

The past few days have seen speculation about his future with Kompany out of contract this summer and although winning back-to-back trophies is a great way for him to finish his City career, it would be far better to see him lift the Champions League trophy before he calls it a day at the Etihad.

Raheem Sterling has enjoyed a dazzling season with a personal best in goals scored and assists, not to mention winning young player of the year, Football Writers’ Association Footballer of the Year award, as well as The Integrity and Impact Award in the BT Sport Industry Awards held back in April.

Sterling really has come on leaps and bounds under the guidance of Guardiola these past two seasons and is now a regular starter for the Blues. This season in particular there barely seems to have been a week passed without several of the mainstream media outlets heaping praise on both his performances on and off the pitch.

Sergio Aguero got yet another vital final day goal on Sunday afternoon when he levelled the score and for the fifth season running scored twenty plus goals in the Premier League finishing the season on twenty-one. It meant that he came in just behind Liverpool’s Mo Salah, Sadio Mane and Arsenal’s Aubameyang who all shared the golden boot award with twenty-two goals.

With Kevin De Bruyne missing a large chunk of the season it was fantastic to witness Bernardo Silva really upping his game from the very start of the season.  He was one of the first to return for the pre-season tour and his performances did not disappoint.

Those performances in pre-season gave him an opportunity in the starting line-up when the league finally got back underway and he has gone from strength to strength.

Keeper Ederson may just have missed out on sharing the Golden Glove award with Liverpool’s Allison following the goal he conceded against Brighton but it was yet another positive season for the City No.1 in-between the posts.

Pep Guardiola, who has signed a contract extension to keep him at the club until at least 2020/21 season has already achieved so much in football with Barcelona and Bayern Munich, but there was doubt within the media that he could transfer his style of football into the Premier League.

That doubt only grew following his first season in charge where the club failed to win a trophy. Comparisons were made to Jose Mourinho, who became the first United manager to win a major trophy in his debut season.

The following season however was a very different story as City cruised to a record 100 points total victory in the Premier League as well as lifting the Carabao Cup.

This season City can go one better, having already secured the Premier League and the Carabao Cup and reaching the final of the FA Cup.

With only the FA Cup Final left to play, Guardiola will already have his sights set on improving again next season. No doubt Liverpool will be pushing for the title again with the entire top six looking to strengthen in the summer with new signings and departures.