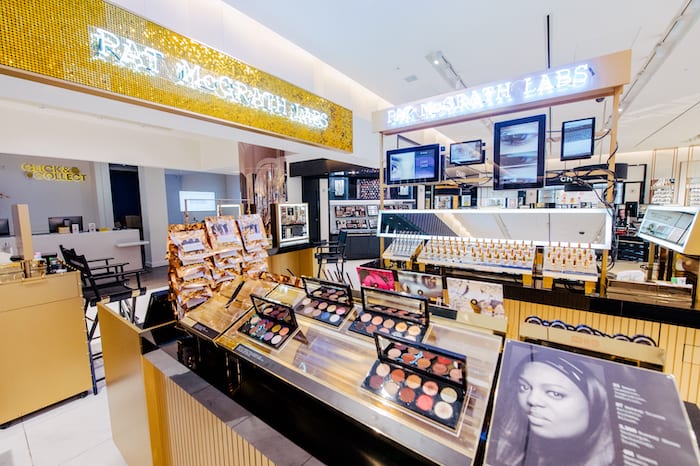 She has worked her magic on the world’s most famous models and superstars. Now, legendary make-up artist Pat McGrath is bringing the tools of her trade to Manchester for the first time.

From today, beauty shoppers will be able to snap up the British make-up artist’s full Pat McGrath Labs range at her first Manchester concession, inside Selfridges Exchange Square.

Known as the Queen of make-up and the most influential make-up artist in the world, she is famous for her innovative and adventurous techniques. She has beautified everyone from Naomi Campbell to Gigi Hadid and Karen Elson in her acclaimed 25-year career.

The Manchester launch follows hot on the heels of the record-breaking opening of her first UK counter in London earlier this year also at Selfridges.

The new concession boasts the signature gold and lip shaped packaging of Pat’s make-up with glistening gold detailing across the counters, situated on the basement beauty floor at the department store.

Pat said: “Selfridges is an iconic landmark; the epitome of luxury that is always finding new ways to excite and intrigue its customers. It has been the most divine experience to launch with Selfridges in the UK this year and to open my second counter in Manchester is truly major!”

The Manchester opening coincides with the launch of her hotly anticipated foundation launch, Skin Fetish: Sublime Skin System on Friday 26th July, which comes in an impressive 36 skin tones.

The new range has also been hitting the headlines thanks to an advertising campaign starring Damian Hurley, the lookalike son of Hollywood star Elizabeth Hurley.

Pat first launched her make-up range to the US market in 2015.

Earlier this year she opened her first UK concession in London, breaking cosmetic sales records by becoming Selfridges biggest-selling beauty line in its history with one product being sold every 40 seconds.

It is expected the Manchester launch will spark the same feverish interest among make-up aficionados in the city.

You can also book make-up masterclasses at the new Selfridges counter with the Pat McGrath team, with the cost of the makeover redeemable against product.

You can choose from the likes of The Runway Power Pout (£35) for perfect lips or Put a Wing on It (£45) to master the tricky winged eyeliner technique.