From humble beginnings in Altrincham, Mackinnon & Saunders have become a world renowned name for their amazing models and animation productions.

Over the past 30 years Mackinnon & Saunders have brought amazing stories to life, from model-making specialised puppets and models to animation productions.

The team has worked with some of the best known directors in the film industry including: Tim Burton, Guillermo del Toro and Wes Anderson.

The company are currently exhibiting some of their amazing models and maquettes at the Sale Waterside. 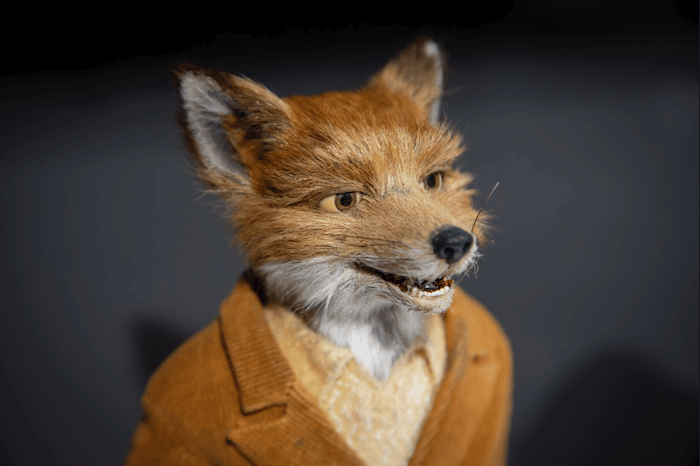 Fantastic Mr FoxHere you can see Bob the Builder,The Twirlywoos, Fantastic Mr Fox, Pinnochio, characters from Mars Attacks!, Corpse Bride and Frankenweenie, all beautifully arranged with intriguing information about them and when they were built.

The pictures and footage around the exhibition shows the huge number of people who work together to bring stories to life, with their amazing skills and talent.

It is an incredible exhibition, detailing the amazing talent about here in Manchester and the Northwest.

We got a chance to speak to one half of the whole, Peter Mackinnon who shared the story of his amazing career so far.

Peter started working at Cosgrove Hall productions making puppets back in the 1980s.

Cosgrove Hall, based in Chorlton was famed for productions of Dangermouse and Count Duckular which were huge TV hits at the time.

They pioneered new techniques in puppet making on productions such as the BAFTA-winning The Reluctant Dragon and Emmy Award-winning The Fool of the World and The Wind in the Willows.

Unfortunately where they used to be based has now been turned into a retirement home.

Peter said it was very lucky he was made aware of Ian, who was a bit younger than him at the time.

He said: “My sister gave me a newspaper article about Ian who was 17 or 18 at the time, about this wonderkid who was making amazing models and had won a competition.

“My sister was living in Warrington and said you need to take a look at this guy’s work, and it blew my mind. He had an immense talent from such a young age.

“We got him in, but unfortunately there were no vacancies at Cosgrove Hall at the time. But luckily I had a friend in London who was looking for people so Ian went down to work on a Jerry Anderson production called Space Police.

“Luckily a vacancy cropped up back up here a bit later and we were able to take him on.

“I was pretty lucky, he’s the best partner I could have ever asked for.”

Back in 1992 Cosgrove Hall who were owned by Thames Television lost the franchise to broadcast during the week in the London area, so they were out of a job.

Peter had the double news of his wife becoming pregnant too, which he said ‘focussed his mind’ more than ever to make things work.

“I said to Ian, should we just give it a go on our own? What’s the worst that could happen?”

And it was a decision that neither of them would regret.

They got their big break in March 1995 when Tim Burton asked them to make models for Mars Attacks!

“After he had seen a short film called ‘The Sandman’ made by Ian, Colin Batty and Paul Berry, very talented puppet animators at Cosgrove Hall at the time.”

He was so taken by the beauty of the models and the darker tone of the short film Tim instantly asked them to get on board.

“It was a bit different. A bit sinister and darker and the Sandman is what they came up with. It was absolutely brilliant – they basically knocked it up in their spare time and they got nominated for an Oscar!

“It was a strange turn of fate.

“If Cosgrove Hall still existed, we’d probably still be working for them because they were a great company to work for. Fate forced our hand a little bit.

“We never had any desire to run our own business.”

Peter said he was honoured to be asked to work with Wes Anderson, Guillermo Del Toro and Tim Burton.

“We’re so grateful to anyone who comes to us to have work done. We do a lot of work with students if we believe in their work and the story too.

“If there’s potential, we’ll go for it no matter who you are. We value their work as much as working with these directors and Children’s series.

“Every project has its own challenges and merits. But yeah you can’t deny the fact it is quite something when you’ve got these directors on the phone.

“When they ask would you like to get involved – it does take about half a millisecond to say yes!”

Despite working with such big names, Peter has remained humble about his and Ian’s success.

He said: “I never once thought I’d make a career of it. I’m so lucky my parents indulged me because I was pretty middle of the road academically.

“I sort of liken it to these snooker players who become brilliant due to a misspent youth knocking about snooker halls learning their skills.

“In some respects my life’s been a bit like that, when I should have been studying I spent most of my spare time being involved with animation.

“I just about got away with it!”

And got away with it they did!

The awards have been rolling in – and rightly so.

In 2013, Ian and Peter were presented with the Bradford Animation Festival Lifetime Achievement Award.

In 2015, Ian and Peter received Honorary Doctorates from Staffordshire University in recognition of their special contributions in the field of stop motion animation.

I asked Peter what it was like to work with such esteemed directors who were recognised around the world for their beautiful films.

He said: “We help these clients realise their vision, not just something 3D but something that almost lives.

“We work very closely with these directors on the shape and the characters.

“I remember working on Mars Attacks! Ian and a team went out to West Hollywood working with Tim Directly, but I didn’t get to go!

“They got put up in the Hollywood Hills in Gore Vidal’s house living the life of Riley but I didn’t get to go!

“Someone had to look after the studio in Chorlton I guess.”

On corpse bride Tim was over in the U.K and he would come up quite regularly to see the development of the characters.

“That was lovely, he’d come up with his producer or sometimes just on his own and would just pop down to Altrincham where we were based and have a chat and see how things were coming along.

“Tim had drawn these characters roughly, which were then worked on by an amazing Spanish artist called Carlos Grangel, then we took over to bring them to life.

“He’s a great person to work with.”

Corpse Bride was Peter’s favourite, as it was a big deal or the company to get that project.

He said: “It was a huge project that employed a lot of talent from the North West.

“The whole point of the exhibition at the Waterside is to show the world that it’s not just me and Ian, although we did rather egotistically name the company after ourselves.

“The reality of it is that on Corpse Bride we had 90 people working on the project.

“We weren’t sure if puppet animation was going to exist for much longer after it: Pixar films were so brilliant and picking up huge audiences we thought this really could have been the last roll of the dice for puppet animation.

“We put our heart and soul into it. Luckily, it paid off.”

I asked Peter about Manchester and the Northwest, and its role as a cultural hub in the UK burgeoning with talent.

He said: “We work with people across the world, but the majority of the people who have been with us for the longest are people from the Northwest.

“There is this talent in Manchester and we’ve had a few examples of crossovers here.”

Peter told me that he had worked with a young Bernard Sumner, lead singer of New Order who worked in the Trace and Paint department when he was 17.

He also had crossed paths with a young guitarist named John Squire, who had made an “a beautiful, creative piece model’ of a shed. He went on to have a pretty good career with the Stone Roses and the Seahorses too!

“I used to go and watch Bernard play when he was with New Order and he asked me – do you think we should go professional – I think we’re rubbish!!

“There’s a lot of talent up here in lots of different guises. It’s a great great place.

“It’s a fantastic industry. We’ve had lots of highs and lows, but I think our greatest achievement is surviving because people only see the success and the highlights.

“Work comes and goes, sometimes we’re full, sometimes very quiet. But we’ve managed to keep it going here in the North West and I feel incredibly privileged to work with the people with we work with, not just the clients but the amazing staff at the company.

“They are truly special. It’s been one hell of a journey.”