Lunya restaurant’s new menu: a summer’s day in Spain with every inventive mouthful 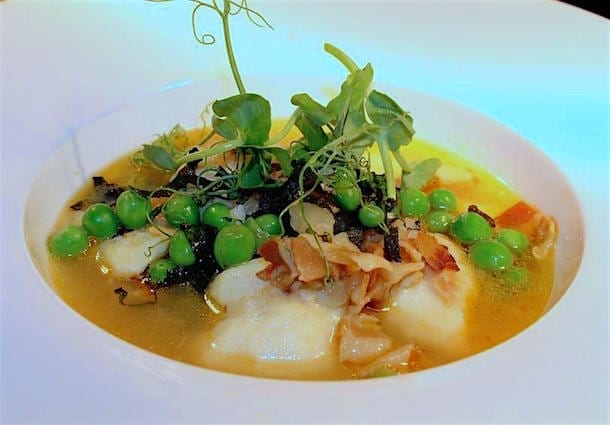 The sun’s back in Manchester. All that’s missing is the Mediterranean grub. If you can’t make it to Spain this summer, why not try the next best thing – Lunya’s 2016 summer menu, serving up authentic and inventive dishes made from seasonal Spanish and Catalan ingredients in their beautiful Barton Arcade restaurant and bar.

Feast on everything from deep fried olives with a difference, to the unique Catalan hotdog – though it makes sense to begin with a little tipple to wet the appetite.

The Casa Mariol vermut is recommended for summer – a well-rounded spirit which is perfectly refreshing with a piece of orange. Or start with one of their signature wines, beers or spirits. Lunya has one of the biggest collections of Spanish drinks in the country, which can also be enjoyed in their bar if – unlike me – you don’t have time for a bite.

The nature of tapas at Lunya typically means that you’ll always have time for a little something as options can be served straight from their deli or conjured up fresh in their kitchen.

The classic Spanish appetizer is supersized for the summer at Lunya. Gordal olives are first infused with chillies and stuffed with Iberico cheese (which combines cow, goat and sheep milk) before being battered and deep-fried. They are surprisingly sweet. According to owner Peter Kinsella, they’ve even experimented with Haribo sweets in the kitchen before coming up with the perfect olive idea!

Lunya certainly doesn’t shy away from reshaping the boundaries of Spanish food. Crab and tuna empanada combines Cornish crabmeat with Spanish bonito tuna, bathed in a tomato sauce and encased in all butter puff pastry.

Pollo al moro is chicken which has been slow-cooked in preserved lemon and Moroccan spices (influenced by the occupation of Girona in the late Middle Ages). Both Moorish and moreish.

There’s a distinct theme of playfulness in the summer selection which makes it stand out in the Spanish cuisine stakes. This includes Iberico (corn fed) pork served on brioche as a burger, and a creative take on Spanish staple sausage and beans in the form of a specially-crafted chorizo hotdog. It’s hard not to miss the magnificent morcillo, Catalan black pudding rolled in cornflakes and deep fried, recommended with a drizzle of orange and honey syrup.

The menu also includes lamb chops dusted in dukkah spices and grilled, and fillet steak done on the plancha.

The sauces deserve special mention. From chilli and tomato-based blend mojo picon – great with their tempura style vegetables – to the tamarind barbeque sauce, it’s hard not to want to buy a bottle of every one you try! The good news is that you actually can, with much of what is served available to take home with you from the deli downstairs. You can taste the sun in their romesco sauce (a traditional combination of almonds, smoked peppers and roasted garlic) and then there’s the salmorejo – a traditional soup-like emulsion which is perfect for their plancha-cooked mackerel.

I perhaps would like to see more cold creative specials for this time of year – an inventive salad or two would not have gone amiss – but there is so much already available on their a la carte menu that you’re spoilt for choice anyway.

It’s clear that Lunya do not limit themselves to a single method or style of cooking, using authentically sourced produce creatively – which is probably why they’ve become such a firm favourite with the city’s foodie crowd.

There are so many ways you can join them this summer. Events include gin tasting, a ham carving masterclass, cheese tasting and gourmet nights.