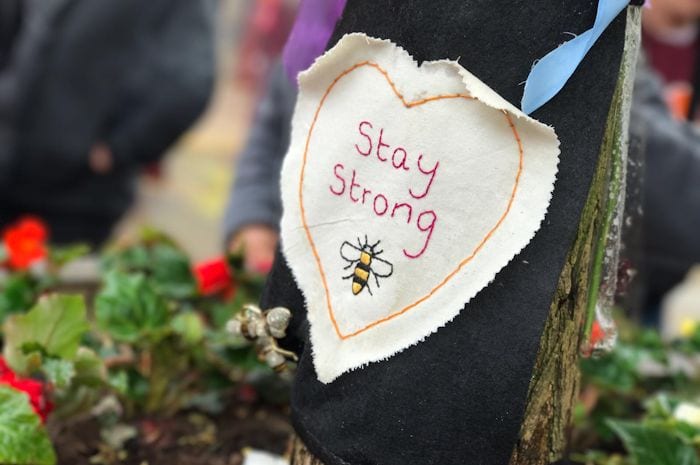 The people of Manchester woke this morning to find that the city centre was having a heart attack.

Thousands of stitched, sewn, knitted and knotted fabric hearts outside Victoria Station, around Cathedral Gardens and Exchange Square.  I picked up one which read, ‘I’m here for you. Take me home.’

Mancunians took to social media, posting pictures of crafted hearts found in plant pots, in decorative drapes over buildings, even on the bonnets of parked cars.

They’ve been made by well-wishers from all over the world for the people of Manchester, part of #AHEART4MCR, a love-sharing campaign which went around the globe in a matter of days.

The idea was that of Beth Clarke from Marple who took to social media following the 22 May terrorist attack to see who would be interested in showing solidarity with Manchester. 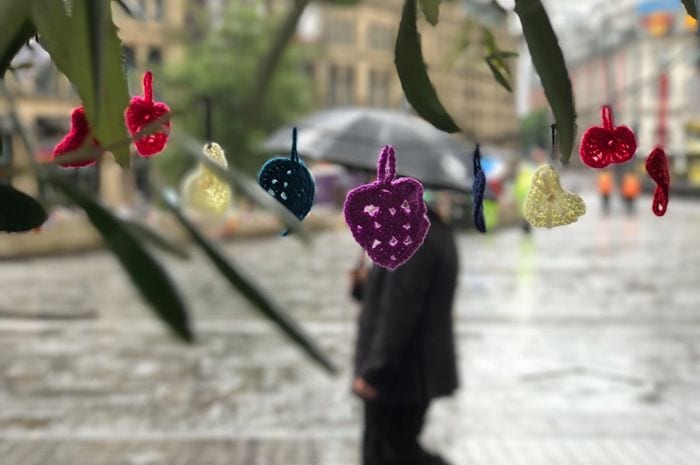 ‘Let’s fill the city with one thing these people can’t kill…. LOVE,’ she wrote.

Little did she know when she set up a group to create and distribute the crafted hearts that it would become a worldwide phenomenon.

“I run my own craft business, B-Stitched, from home, and after the tragedy at the Arena I thought I’d make myself a little heart to hang in my window,” she told us.

“I put it on a craft group on Facebook and so many people said what a fab idea and that they would do the same. 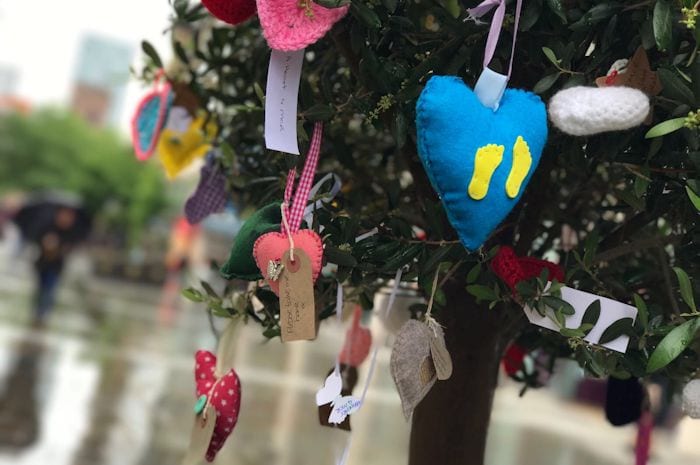 “It went from my vision of just my mum and I taking a carrier bag full of hearts to hand out to people, to 4.5k people from all over the UK and all over the world as far as Australia, America and South Africa, sending me a grand total of 18,735 hearts! So I roped in some family and good friends as volunteers and today we’ve covered the city centre.”

The hearts began to appear today, distributed by Beth, her mum and a team of volunteers who braved the rain to bring something beautiful to the public of Manchester. They are aiming to carry on for the next fortnight.

“I saw the original post on Instagram and was inspired to start,” said Kelly Matthews from Idaho, USA. “I ended up sending 22 hearts last week. It was a way for me to share some love and the fact that so many people have done this for a community they don’t belong to makes me so happy.”

“It has been totally overwhelming and so touching to have had so many amazing people supporting us and the response today has been amazing,” says Beth. “Exactly what we wanted to achieve. Social media has gone crazy with our hashtag!

“We are planning on doing another drop in a few weeks time but we do not require any more hearts as we are expecting more to be delivered all this week.”

So keep your eyes out for those little hearts, feel the love and take one home with you.  #AHEART4MCR.