Review: Lion King at The Palace Theatre is “a spectacle in every sense of the word”

The Iconic Disney Masterpiece comes to the stage at the Palace theatre, with astounding results 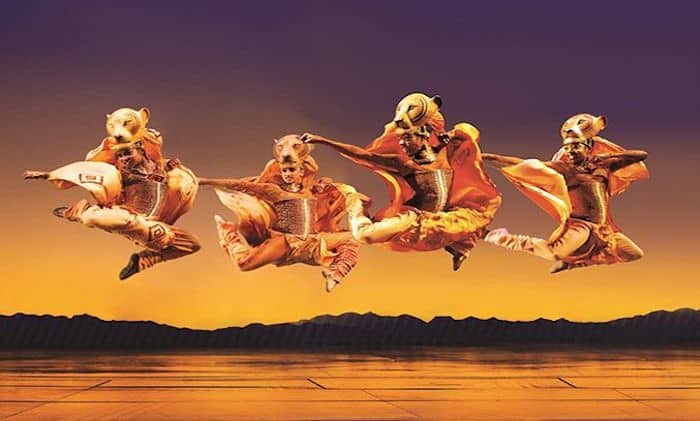 Following on from the enormous success of Disney’s 1994 animated masterpiece: The Lion King, it wasn’t long until the decision was made to adapt the modern classic for the stage.

So, in 1997, The Lion King made its Broadway debut, featuring a by-now iconic score by Elton John and Tim Rice: it opened to immediate critical and commercial success.

Fast-forward 25 years, and it’s still going strong, having been performed in front of over 110 million people in over 100 cities around the world, and now holds the accolade of being the highest grossing musical of all time.

Returning for its 3rd run at the Palace theatre, following stints in 2012, and 2015 – this production is helmed by director, Julie Taymor, who delivers a production that is on a par in terms of scale with any that has come before on either the West-end, or on Broadway.

The show features some 232 puppets (designed by Taymor and Michael Curry) and over 50 performers working in tandem to deliver a truly unbelievable spectacle.

Indeed, the sheer number of moving parts on display is truly breathtaking, and is remarkable to behold. The costuming and mask design (also by Taymor and Curry) is also worthy of note. The way the costumes and masks adapt and fuse seamlessly with their operators/wearers is truly impressive.

And then there is the music by Jon Aspital, who orchestrates all the fan-favourites and delivers the classics… and they do not disappoint.

Further vocal arrangements have been added to the stage show by Lebo M to give it a more authentic African feel, and the score features a contribution by Hollywood maestro, Hans Zimmer, to give it some further gravitas. 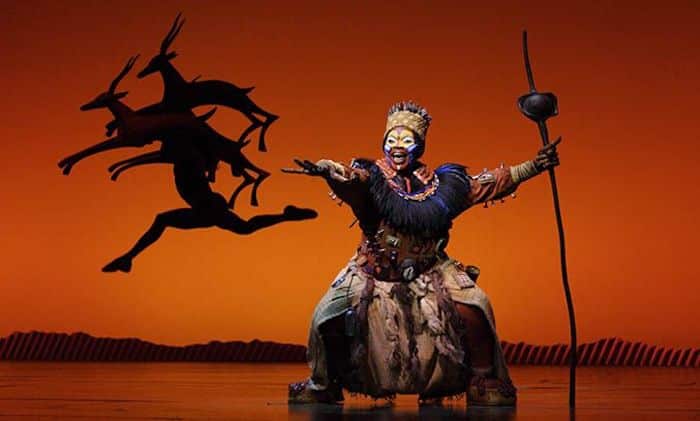 There is also creative use of shadow puppetry throughout that gives the show an at times dream-like quality, courtesy of the talents of lighting designer Donald Holder.

All of these elements coalesce with mesmerising results.

For those not familiar with the plot: it follows Simba (Stephenson Ardern-Sodje), the young Prince of pride rock, who, after being tricked by his nefarious, and treacherous uncle Scar (Richard Hurst) into thinking he had killed his father – Mufasa: (Jean-Luc Guizonne) goes on a journey of discovery, and learns – with a little help from some new friends – how to overcome his fears and self-doubts, before returning to liberate the pridelands and take his
rightful place as….the lion king.

The show opens firing on all cylinders, and jumps straight into CIRCLE OF LIFE, as gigantic, four metre long elephant puppets, cleverly fused with inspired and creative costuming plod down the aisles, and brightly coloured birds dance and whirl through the air above the audience.

It is a truly wondrous spectacle to behold, and leaves you in no doubt that this is going to be something special. The cast, which comprises of over 50 performers is immediately put to full use as the whole theatre bursts alive to the sounds and sights of the
savannah.

Along the way, we meet, or are re-acquainted with characters that almost feel like old friends at this point…

Simba himself is portrayed by Stephenson Ardern-Sodje, who does a wonderful job of encapsulating the vulnerable, and multi-layered disney prince through all his moments of doubt and triumph.

The wise, and hilariously eccentric Rafiki, played by the wonderful Thandazile Soni never gives up hope that the pridelands will be restored, and awaits the return of the young prince.

Nala, played by the fantastic Nokwanda Khuzwayo is Simba’s childhood friend, and would be Queen.

Her performance of CAN YOU FEEL THE LOVE TONIGHT, along with Stephenson Ardern-Sodje is a deeply emotional piece, and is delivered powerfully by the talented pair.

Mufasa, Simba’s father, is portrayed with a commanding and regal air by Jean-Luc Guizonne that would make James Earl Jones proud…

The way he stalks the stage and embodies the power and authority of the great lion king is very impressive. In fact… the movement by choreographer, Garth Fagan is inspired throughout, with all of the cast manoeuvring around the stage with an animal-like grace, that channels their respective animal spirit marvellously.

Comic-relief is added by the inimitable Timon and Pumbaa, played by Alan McHale, and Carl Sanderson, respectively. The heart of the show, and Simba’s unlikely saviours: they quickly establish themselves (or should that be re-establish) as audience favourites and when it is time for HAKUNA MATATA everyone in the audience is in raptures.

The stand-out performance however has to be the villainous, and also at times, hilarious, Scar, played with great versatility by Royal Shakespeare company veteran, Richard Hurst.

In particular, his scenes with Zazu, the king’s self styled majordomo, (Matthew Forbes) standout….with one particularly hilarious Frozen reference coming to mind.

The air of menace that he exudes is almost palpable, and his scheming and plotting with his jackal co- conspirators earned him light-hearted heckling from the audience at curtain-call.

Truly a spectacle in every sense of the word. Heartwarming, heartbreaking, hilarious, and visually, and musically stunning – The Lion King is a perfect evening out for all the family, that will not disappoint.

The Lion King has had its run at the Palace theatre extended until Saturday, March 11th, and tickets for the final 3 weeks of its run go on sale on Weds 2nd November.

You can get your tickets by clicking here.