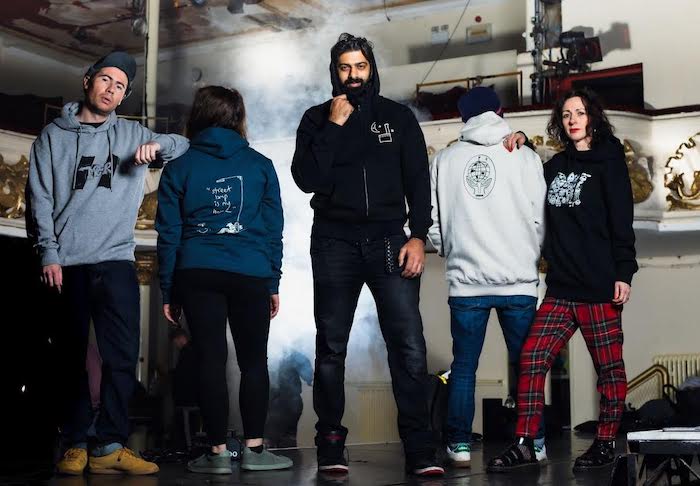 Every hoodie purchased sees an extra one going to someone living on the streets of Manchester.

You can even add joggers for £7, to ensure someone on the streets can stay warm.

All proceeds will go to Lifeshare – Manchester’s oldest homelessness charity who have been supporting the homeless and vulnerable in Manchester and Salford since 1984.

Clint Boon, Jason Herd and Jon from Everything Everything have all designed their own hoodies and have used inspiration from their views on Manchester at night.

A limited-time online shop is now open for people to purchase two, exclusively designed hoodies – one to keep and one that will go straight to someone living on the streets.

Each hoodie can be pre-ordered from Lifeshare’s limited time shop from 4 November until 28 November for £49 with a second hoodie going straight to someone in need.

Speaking to I LOVE MCR, Clint Boon said: “When I was asked to design something, I immediately thought of a song I wrote back in 1987.

“It was a song called ‘Joe’ which became a popular Inspiral Carpets single a couple of years later. I wrote it about a homeless man I knew whose nickname was Joe.

“Unfortunately, he never got to hear it as he died the week after I wrote it.

“He walked the streets of Ashton-Under-Lyne collecting scrap metal to earn a few pennies to help pay for his food and cigarettes. He had a great spirit. He had fought for his country in the armed forces. His memory stays with me.”

“If you can, and I realise it’s tough right now for a lot of people, please buy one of these hoodies – it’s all for a good cause and you’ll actually be providing warm clothing for someone who needs it this winter.”

The hoodies are modelled by volunteers and lead singer from Ventrelles, Phil Knox and available to order until November 28 with all hoodies being shipped on or before 7 December.

Judith Vickers, operations director at Lifeshare, said: “We’re in a very tough environment right now, Lifeshare is seeing more and more people threatened with being homeless or classified as not having anywhere to live.

“This is only going to get worse as winter hits, the cost of living increases and the economy struggles. We are very concerned.

“This campaign however helps us not only raise much needed funds, but provide warm clothing for people who need it. Last year we sold hundreds of hoodies – this year we’re so grateful for these stalwarts of the music industry to support us and, as always, our very clever local artists, Emma Evans and Han Valentine and Give Today. Dig deep if you can people, this is how you can help – practically and with a little cash.”

You can access their online shop by clicking here.

Jon Higgs, lead singer from Everything Everything said: “Homelessness continues to be a huge issue in the modern age, and for nearly 40 years Lifeshare have been working as a support infrastructure for the homeless.

“I’m really proud to be involved with the great work that they do, and hope to draw some attention to the homelessness crisis over the winter months.”

Purchasers will receive one hoodie for themselves and the other goes direct to someone in need.