Lifeshare: a charity on the frontline of the Manchester homelessness epidemic

Like most Manchester residents, Mark Jorgensen can’t help but be shocked by the recent surge in homelessness in the city 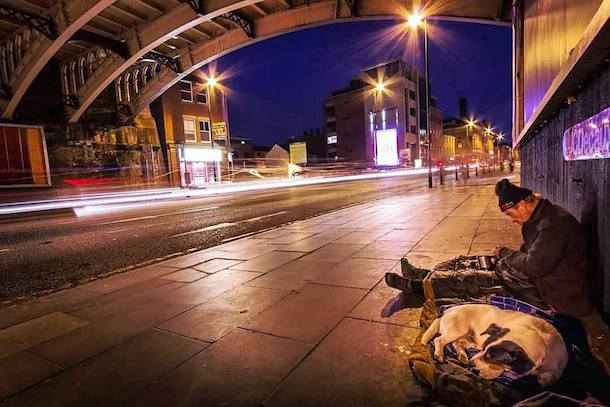 A steep rise in poverty and homelessness is a national issue, but in the decade or so living in the city centre, the sheer number of people currently out on the streets is nothing short of unbelievable. And horrific.

I caught up with Judy Vickers and Julie Boyle from Lifeshare, one of the homelessness charities under huge strain on the front line of a problem bordering on an epidemic. That’s Julie’s assessment, not mine.

Having gone through the process of going to prison for drug offences, rehabilitation, getting a degree, and landing a job close to her heart as a result, Julie is as qualified and experienced as anyone to understand and help the huge numbers of young people falling through a net that is withering by the day.

To put this into context, Lifeshare’s client base of vulnerable young people who are homeless or at risk of being homeless in Manchester has risen from 90 in March 2014 to 300 in March 2016 – an increase of over 200%.

A year or so ago, Lifeshare featured in a documentary about the proliferation of Spice – a catch-all term for legal synthetic cannabis products – and their role in people suffering life, health and financial problems, often leaving them on the streets.

They also appeared in another documentary – Hidden and Homeless with Professor Green. Both programmes made interesting viewing about different aspects of what is a collective botch job, whichever way you look at it.

For me, it still seemed too much of a nuanced and complicated issue to be simply the result of some sachets of ‘plant food’ with names a religious outreach program might come up with while trying to talk to kids ‘on their level’ about drugs, freely available all over the city. Gocaine is one of them. There must be a lot of chatty plants.

I had certainly underestimated the problem – as I discovered when I spoke to Lifeshare.

“It’s the worst scenario I’ve ever seen” says Judy. “I worked through the needle exchanges and onset of the likes of crack in the 80s and 90s but I’ve never seen as much suffering as I have from these drugs in the last 18 months alone.

“There are just so many horror stories with Spice. We don’t condone or tolerate it, but if they are in a state from taking these drugs, we’d rather they were in here with a Pot Noodle than out there and vulnerable. That’s our focus – to protect people from the exploitation brought about by – or the cause of – homelessness. Whether it’s sexual, financial or gang, exploitation is the daily danger facing anyone in that situation.”

Exploitation is rife amongst Manchester’s homeless camps which are increasing dramatically both in quantity and population, creating a subset of mini-communities across the city. 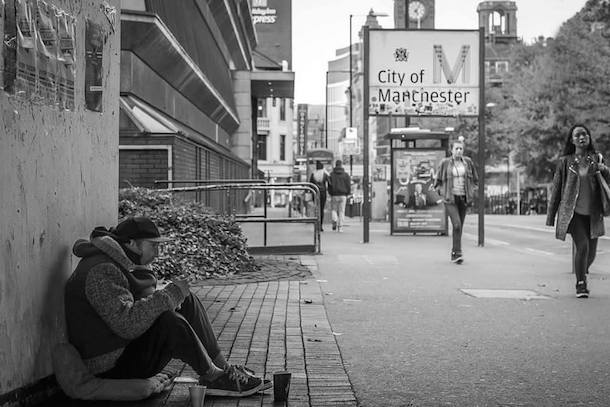 It’s hardly an exaggeration to compare the current camp opposite the MacDonald hotel to LA’s infamous skid row, and incidents of rape, drug abuse and exploitation are a daily occurrence, with even a murder at one of the camps last year.

While Spice is an undeniable and terrible scourge, it’s not the only problem. Funding cuts and a red tape-littered legal system which seems to restrict rather than facilitate people’s access to opportunities for rehabilitation precipitates a yo-yo effect of dependency and offending with little support.

Judy explains. “Funding is a big issue. Take, for example, your more dependent or chaotic clients. They have previously had both day and night time workers to provide support when they need it. With so many budget cuts, this is often now restricted to just a night-time worker.

“Getting people to an interview for emergency accommodation at one of the hostels is increasingly difficult. Staff cuts mean they only have one staff member there to do this, despite the fact that you need two people present to actually do it. So we have to go down there with our clients to actually allow this process to go ahead.

And that’s before you take into account the fact that there are fewer beds available in emergency accommodation these days either.”

“Council changes to housing arrears, the introduction of a new 12 month community order for offenders – these are just some of the problems with the system that are making the situation worse,” Julie adds, “dehumanising the people most in need without giving them any skills, support or advocacy to actually get themselves out of trouble.

“It’s treating them like ‘well, why should we help the drug users?’But it’s not as simple as that. Lots of people are only a couple of missed paycheques from being on the streets. A lot of it is generational, too. The parents of our clients have often been through the care and/or prison system, so their children are being brought up in an environment where they don’t learn how to break out of the cycle. That’s why they end up on Spice, and look what that is doing to them.”

There is clearly no easy solution. While donating to one of the many food banks now cropping up all over the country certainly helps, addressing the source of the problem is an almighty task requiring significant legal, financial and social reform to even make a dent.

Lifeshare suggest ways you can help. The Big Change Campaign is an organisation dissuading street donations in favour of collective donations to a central fund, to which Lifeshare and other charities can apply for a grant to arrange food and shelter for their clients and help get them get back on their feet.

For more information on both, visit: