La Calҫotada at Iberica: a Spanish celebration of onions and wine 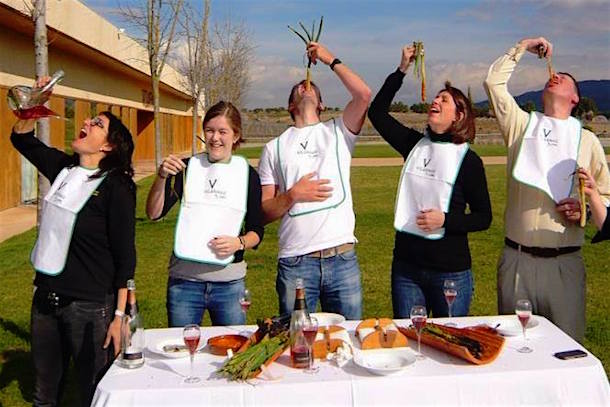 When I was invited to the La Calҫotada evening at Ibérica, I was a bit dubious. A Spanish food festival celebrating onions? I had no idea what to expect but can honestly say it was one of the best evenings I’ve had out in Manchester.

There’s no easier way to sum it up than by describing it as a fun – and messy – evening of peeling onions, sampling delicious meats and trying and failing to pour Cava into our mouths from great heights.

La Calҫotada is an annual winter food festival originating in Catalonia that involves eating calçots and a lot of wine. Calçots are a type of green onion grown in the region of Tarragona, They are long and thin, a bit like a spring onion, but the size of a small leek.

La Calҫotada celebrates the harvesting of these onions in a tasty feast. Although traditionally celebrated outdoors with a BBQ, the stunning interiors of Ibérica were a pretty pleasant location to host the meal.

Modern and tastefully decorated with some Mediterranean touches throughout (I especially liked the patterned tile) Ibérica has a relaxed yet sophisticated vibe to it. It’s the kind of place that I could never imagine getting overcrowded and the ideal place for people seeking a delicious, atmospheric and elegant dining experience.

For the La Calҫotada dinner, there were thirteen of us seated at a private table upstairs. Greeted with a glass of Vilarnau Brut Cava by Arthur, a representative of the Vilarnau vineyard in Spain and our host for the evening, we assembled around the table to begin the evening. 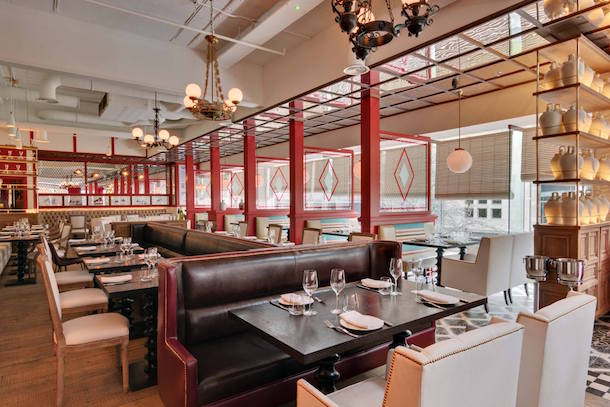 It became obvious pretty quickly that the dinner was not going to be ordinary as everyone was given a fabric bib – not an everyday occurrence for a grown adult. As an explanation and introduction, Arthur gave us some background knowledge on the festival as a whole as well as about the vineyard and wines.

The bibs first use then became apparent – the porrons of Cava that were being distributed along the table. The strange drinking vessels that resemble squat bottle with spouts are traditional Spanish wine pitchers designed to stop air getting to the wine and require an unusual drinking technique.

Filled with Rosé Cava, we were instructed how to drink out of a porron correctly by pouring wine into the mouth via the spout from a distance. After several failed attempts and a lot of wasted wine on my bib, I gave up and drank out of a glass instead but it was definitely a memorable experience!

Things got a whole lot messier with the first food course – calҫots. As is traditional, the onions had been grilled and wrapped up in newspaper – a neat bundle emitting delightful aromas. Served with a pepper and nut based romesco dipping sauce, we unwrapped the paper and began stripping off the blackened outer layer of the onions to reach the delicious soft onion underneath.

Between mouthfuls of calҫot, drinking more cava was compulsory and the two flavours married well together. After a quick washing of hands, it was time for the meat courses which came served with a smooth Tempranillo Rioja.

Butifarra, a slightly spicy pork sausage served with mashed potato was followed by Ibérica prime cuts of roast pork accompanied by a smoky sauce. Both courses were succulent and full of the flavours of Spanish cuisine and if you closed your eyes you could almost imagine that you were sat in the balmy Spanish outdoors. These grilled main courses were perfectly rounded off with a decadent cream and custard dessert of epsuma de crema catalan with salted caramel ice cream.

An unusual but fun concept, the evening was certainly memorable and achieved its mission of introducing us to and celebrating the calҫot onion harvest through a tasty feast and plenty of Cava.

The La Calҫotada may only be an annual occurrence but the wines and flavours of Spain can be enjoyed by everyone all year round at Ibérica. A great place to go with friends or on a date, Ibérica should definitely be on your radar if you are a fan of Spanish cuisine. With amazing food, a great selection of wines and not to mention impeccable service, don’t forget to check out the impressive wine wall in the downstairs bar or the quirky mirror walled bathroom upstairs.