Salford’s Karl Pilkington is back with a second series of Sick of It, the poignant comedy in which he plays Karl, a fed-up, middle-aged bloke whose continued existential crisis isn’t helped by the dour voice inside his head.

In the new series, he’s still living with his elderly aunt Norma, but she’s hired a bubbly new care worker, Ruby, leaving Karl feeling excluded. Realising it’s time to get his life in order, and finally move on from his ex-girlfriend, he sets out to do some soul-searching, which involves a brief return to Salford to right a past wrong.

Karl, who co-wrote the series with Richard Yee, shares his thoughts with us on the show’s return, his love of cleaning, and the unusual place he keeps up with his online admin.

Did you feel more confident working on a second series?

No, I’m not a confident person, which I think is the best way to be, really. I think if you’re not confident, you make a better job of something. I was changing things right up to the end, but it’s turned out alright.

How autobiographical is it?

All the little things that start the episodes off are worries I’ve had. There’s one where I try and right a wrong of something that bothered me when I was younger, it’s when I got back to Manchester, and it’s something that’s happened in real-life, and then you make a story up. It’s a chance to look at your life and what things stick with you and use that as a little seed. So, there are bits of me in there. I’m not that confident, I moan a bit, that’s me.

Does it feel cathartic to write about things that bother you? 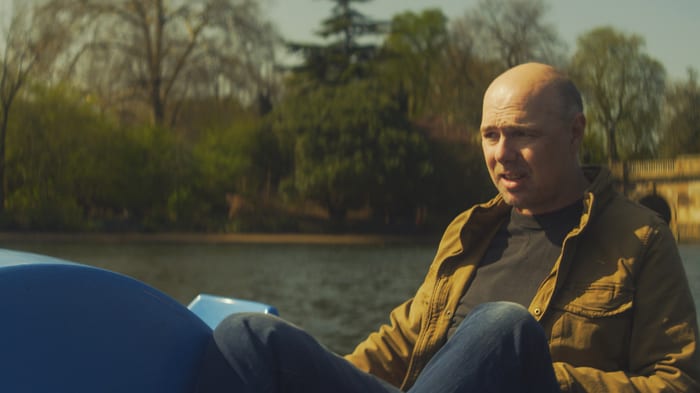 What are your memories of filming in Manchester?

I remember for one of the scenes, we were out in a field, in a rush for the light. I was with my body double Michael. Usually you’d go back to this house to get changed, but the director looked worried and I knew he wanted me to get changed just there. Michael hadn’t got his back up clothes, so we’re basically just sharing clothes. In one shot, he had to put my underpants on, that’s horrible.

How do you film scenes when both Karl and his inner voice are in them?

Whoever’s talking the most, we’ll record that, and then I’ll put an earpiece in and fill in the gaps.

Does it feel like you’re always up against the clock during filming?

There’s never enough time, everything feels like a rush. I’ve had jobs where you can go, I’m not up for this today and keep your head down and think I’ll do more tomorrow but with this, you can’t do that. You’ve got to turn up – twice – and I struggle with that. It takes over, and I don’t like that. I never enjoy it at the time, only when it’s over.

What would you say series two is primarily about?

Episode one is sort of about insecurities, wanting to have a use in life – we’ve all had that. I suppose self-esteem is also a big topic in series two. Karl doesn’t feel that good about himself, he wants to do better, but we can’t all do well, can we. It’s not mega positive, it’s not like a Richard Curtis film, but I’d say it’s pretty positive from where he is in his head.

It’d be interesting if you watched Sick of It and edited out all the stuff with Inner Self and you just saw Karl on his own. You’d think he was quite a depressed man. Maybe a bit moody, bit rude. But when you know what’s going on in his head, you’re kind of with him a bit more.

I think everyone’s like that, you don’t really know people do you? It’s what they put out for everyone to see.

How did you cast Ruby (played by Marama Corlett)?

We spent months looking for the right Ruby. From the start we wanted someone who would feel the opposite of Karl – breezy, fun, with a zest for life. The yin to Karl’s yang. But she also needed to be someone we could imagine Karl connecting with, too. Someone who’s a bit of an outsider like Karl.

From her first auditions, Marama had a spirit and energy of her own that she brought to the character. Being raised in Malta she had a distinctive accent and turn of phrase that made her character feel more unique, so we started tweaking the scripts to reflect this.

Can you empathise with Karl feeling left out by Ruby’s presence?

All the episodes are about my little insecurities in life and about having a place in the world.  It’s like when (my girlfriend) Suzanne got a cleaner. I was quite happy doing it, and it’s that not feeling good enough. We don’t have her now, I got rid of her. Cleaning’s good for my head.

When you come into a bit of money, it’s easy to slip into getting a cleaner, gardener, window cleaner, but what are you going to do with your life? You can’t have fun all the time. People try and take it out of their lives, but you need that calm.

Will you be looking at people’s reaction when it goes out?

I’ve got a Facebook page so I will have a look at that. With Facebook, I’m mainly answering stuff on the toilet, being honest. It’s something to do, a bit of paperwork, a bit of admin.

It’ll be a mixed bag, that’s how it is, but the best is when people watch an episode and go ‘that’s me, that’.

All episodes of Sick of It will be available on Sky One and NOW TV from 10th January 2020.