Adam Wilcox, Sam Elphick, Sarah Taylor and Craig Taylor are a group of four friends who all own and love dogs.

In just 12 short days, their campaign for the ban on dogs travelling on Manchester’s Metrolink to be lifted has gained over 3,400 signatures and has featured on both local and regional media outlets.

We spoke to the friends behind the petition to find out more about the campaign, the public’s reaction so far and the group’s future plans.

Regularly getting together on weekends, campaigner Sarah told us that the group of friends love to do things with their four-legged pals and often use the bus to get around to different places.

“Last week, we were getting the bus and all the other passengers were just loving the dogs,” said Sarah.

“We went out for dinner and were discussing how we couldn’t get to certain places because there are too many bus changes or the buses don’t run services there or it’s too far away – and that’s when we decided we were going to do something about the tram. If it would make our lives easier, then surely it’ll make thousands of other dog owners’ lives easier too?”

In 2013, a group of Mancunian dog walkers set up a similar petition. They ran it over a year and in total received 1,250 signatures.

“We did some research and found that it had previously been done. But because it hadn’t been looked at in years, we thought that the first petition was quite a long time ago and it’s probably time to re-evaluate it – especially now that the tram network is getting much larger. We’ve now reached over 3,000 signatures within seven days, which is amazing.” 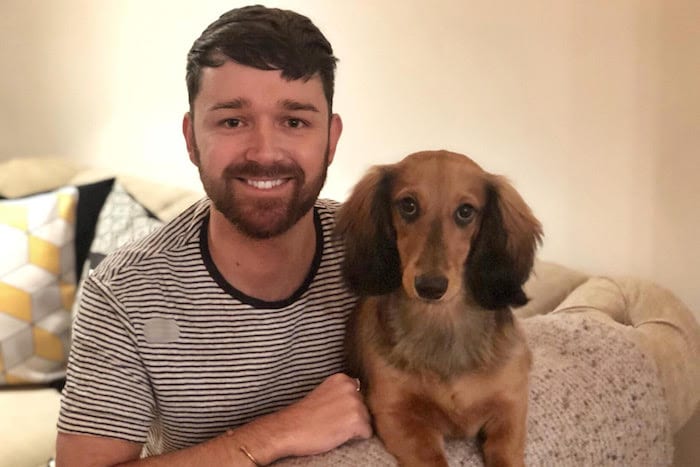 Since launching the campaign just 12 days ago, the group have had many people contacting them to share their support for the petition. And Manchester’s only Lib Dem councillor John Leech, who is also a member of the transport committee, wanted to get involved straight away by pledging his support for the campaign.

“He contacted us to tell us that he fully backs the campaign – as soon as he saw it online he emailed us and said he wanted to be involved. He put out a press release fully backing us and saying he was going to take the issue to the next committee meeting for a re-evaluation on the ban. He told us that when he finds out committee dates he will let us know and that’s what we’re currently waiting on.”

In the meantime, the group are focusing on driving the petition as much as they can. The more signatures they get, the more weight it bears.

“The more people that sign it the more seriously it will be taken. The last petition had 1,250 signatures and they did try to get it reviewed in 2015 but it was completely shut down. They were going to do a trial over a month period, but it never really happened. Obviously social media has come along a lot more since 2013 so we have more of an advantage to the last time this was brought to light.”

“We’ve had tons of people contact us that would be prepared to help out with spreading awareness, it’s been incredible. At the moment we’re in the planning stages with different businesses. We’re planning a huge dog walk through the city centre. And also hosting events outside the RSPCA.”

“We’ve had a company that produce organic dog treats that would like to get involved. We’ve had a PDSA vet in Chorlton reach out to us wanting to help. And we’re going to get paper forms for dog owners who don’t have smart phones or don’t use the internet.”

Not wanting to get ahead of themselves, the group aim to reach a certain number of signatures before they make their next big move.

“We don’t want to go in prematurely with this,” Sarah told us. “More backing from more people is needed first before we can take it to the next level, so it’s really important we get as many signatures as possible.”

“All we want is for people to realise that dogs can obviously travel on every form of transport minus the tram, and that is the most annoying thing. I don’t think anybody really understands why dogs are banned, especially because the London Underground is dog friendly.

“If you’re out walking your dog or know any dog owners or lovers, just ask them if they’ve heard about it – tell them what’s going on and help spread the word.”

The group of friends, who between them have a Dachshund and a pug, have just launched a social media hashtag campaign. Supporters of the cause are encouraged to share snaps of their dogs at local tram stops, using the tag #MCRMetroDogs.