Three months short of 13 years since the last picture show at the former Odeon cinema on Oxford Street, the landmark art deco building familiar to Mancunians for almost 90 years, is finally being razed to the ground.

The last of the iconic theatres standing, the white stone facade that dominated one of the city centre’s busiest streets for decades, will be demolished by the middle of the month. The building, which once accommodated audiences of nearly 3,000, is to be replaced by Landmark, a 14-story office block matching One St Peter’s Square next door.

Built in 1930 as the Paramount Theatre for the UK arm of the American theatre chain of the same name, it became one of several cinemas along Oxford Street in the heyday of Hollywood glamour following production of the first ‘talkies’.

The Paramount was the largest of Manchester’s picture palaces to survive as a cinema. On the opening night, Maurice Chevalier starred in the movie The Love Parade while a variety show was performed on stage. In November 1939, two months into World War II, the Paramount circuit was taken over by Oscar Deutsch’s Odeon group and the Manchester venue was renamed in April 1940.

As the Odeon it outlived the nearby Gaunt which opened in 1935 on the site of the 1904 Manchester Hippodrome. The Gaumont’s last screening was in 1974 and the building was knocked down in 1990 to make way for a multi-storey car park. The Odeon also outlasted the New Oxford, built in 1911 next door to the Hippodrome. The last film was shown in 1980 and later the building was converted into a McDonald’s restaurant. 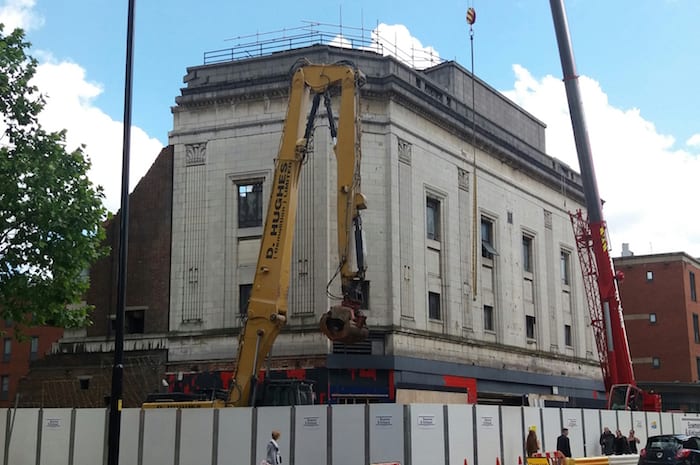 All three Oxford Street cinemas continued to thrive in the 1950s and 1960s with huge audiences for the latest blockbuster films before the advent of television in most homes. The Odeon also continued to double as a theatre, hosting touring pop music shows, most notably the Beatles’ last live performance in Manchester on 30th May 1963.

Having played before an audience of around 600 crammed into the basement Oasis Club on Lloyd Street – their fourth gig at the venue in six months – their performance at the Odeon drew thousands of screaming fans as Beatlemania was born.

It was the 12th date of the Fab Four’s national tour with legendary American crooner Roy Orbison. According to The Beatles Bible, they played a seven-song set: Some Other Guy, Do You Want To Know A Secret, Love Me Do, From Me To You – which topped the charts as their first number one earlier in the month and stayed seven weeks –  Please Please Me, I Saw Her Standing There and Twist and Shout. 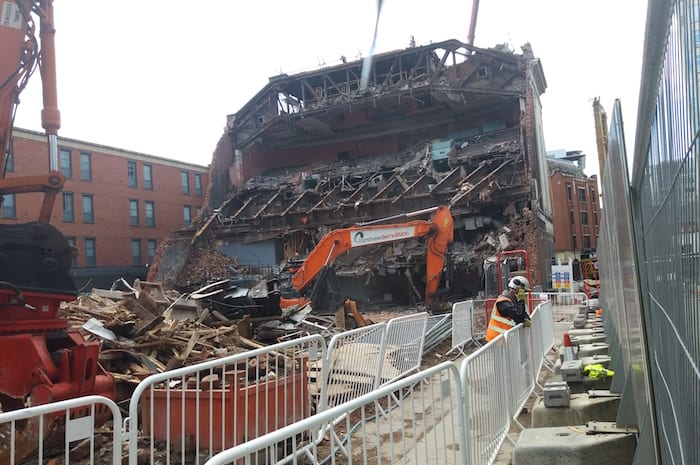 As a cinema, the Odeon received a second screen in 1973 and became a triplex in 1979. Despite the addition of four more screens in 1992, making use of stage and basement areas, the writing was already on the wall with the huge Great Northern Warehouse in Deansgate earmarked for development as a multiplex cinema. When that came to pass, the Odeon closed as cinema in 2004.

The building had been considered for listed status protection as early as 1999, but the idea was rejected because too many original features had been removed – not least the Wurlitzer organ which eventually found its way to Stockport town hall’s Great Hall ballroom after a spell in Manchester Free Trade Hall.

By the time a second listing bid was submitted in 2007, it was too late. The building had suffered extensive interior damage. And now the end is nigh, and the place where so many memories were made has itself become a memory.