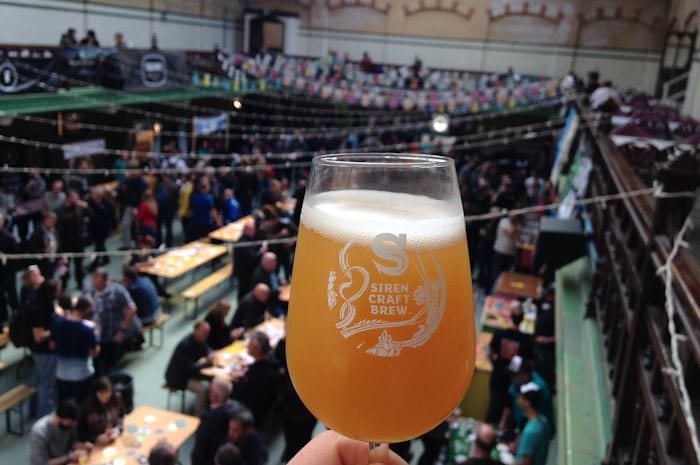 I have a slight chip on my shoulder when it comes to bars like Port Street and Common – some of the brains behind Indy Man Beer Con – due to their prices compared to some of the city’s other real ale pubs. But, that aside, they are a good thing for Manchester, especially when they come together to produce something like Indy Man.

Queuing up outside Victoria Baths gets the blood pumping. Victoria Baths is just as big a factor as the beer. It’s the best setting there is for a beer festival. As you walk in you’re greeted by the stunning architecture – alcoves and oddities that were once reserved for swimmers now fight for storage space amongst drinkers’ Untappd photos.

The three main rooms all offer something slightly different, whether it’s the light through the impressive glass roof or the sunken, pool vibes that give this festival its real sense of character.

@IndyManBeerCon
Everybody looks so happy! Is it the beer, is it the company? It’s both! pic.twitter.com/Ae416XYzmA

Talking of the beer, it was good. Although some of my favourite breweries like Wiper and True didn’t make it along this year, it was nice to see the inclusion of local brewers Thirst Class Ale and Quantum, alongside smaller brewers such as Five Cloud Brew Co in The Thirsty Games. But as well as sensational UK beers, we were treated to the likes of To Øl from Denmark and Jester King from Austin, Texas.

After a few sherbets, attention naturally turns to food. Every year I see the Almost Famous van and think I must try something else, but temptation once again took over as I attacked a fantastic bacon cheeseburger. Classy, eh?

My fellow eaters enjoyed some sensational Honest Crust pizza and a taste of things to come from Bundobust. But it wasn’t all big burgers and pizza, Epicerie Ludo brought some fantastic cheeses and In Truffles We Trust brought Beavertown and chocolate truffles. Very nice.

All these elements come together beautiful over the four days of Indy Man Beer Con to create a beer festival that caters for everyone – old, young, fat, thin, craft beer snob, giddy enthusiast and everything in-between.

I always invite friends who don’t necessarily go out of their way to drink craft beer as IMBC has a buzz and spirit that transcends opinions on whether pale ales are no better than Fosters. It’s just a good old knees up in a truly stunning, Grade II listed building.

Sadly, there’s a year to wait till the next one. Fortunately, Salford Beer Fest is around the corner and that will be an absolute corker.