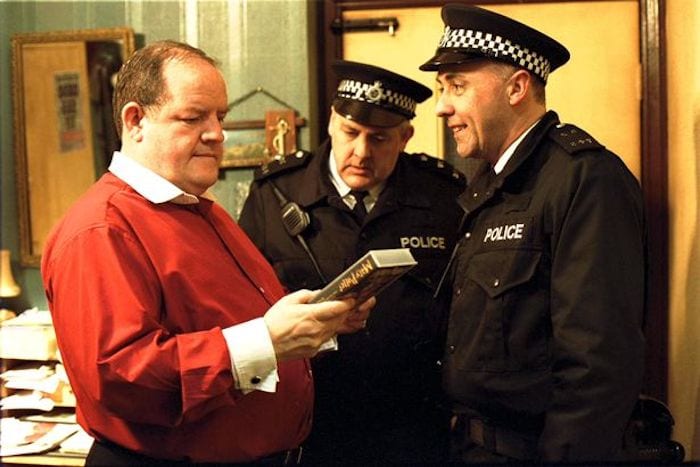 John Henshaw has worked with Ken Loach, starred in the TV mini-series Cilla alongside Sheridan Smith, and been in The Cops. He is perhaps best known for his role as Ken, the landlord of The Grapes, in the much loved comedy drama, Early Doors. The show has been adapted for the stage and goes on tour later this year. It has sold out The Lowry so an extra date at the Manchester Arena has been added.

We caught up with John for a natter about his career and why Early Doors still packs them in ten years after it was last broadcast.

I did a bit of am dram with St Dunstan’s in Moston whilst I was still on the bins. Then Fringe with Real Life Theatre. And then got lucky when Casting Agent Bev Keogh got me in for The Cops. Really, I am just a lad from Ancoats blagging it. I started acting when I was 39, and before that I had more jobs than Charlie Drake.

Which have been your favourite parts?

Roy in The Cops for great dramatic writing, Ken in Early Doors for great comedic writing. Meatballs in Looking For Eric and Harry in The Angels Share. Working with Ken Loach was an ambition fulfilled and great stories by Paul Laverty.

What are your memories of working on Early Doors?

The second series – or was it the first? – was filmed during a heatwave and the air conditioning was faulty. Some of the cast were falling asleep in between takes. I had a rack of lights over the bar! My head looked like a panini and I was sweating like a cheese.

How did you feel when the stage version was given to you as an option?

I can’t wait to get started. It’s a great script. It’s been ten years since it was first broadcast but people still mention it to me most days. And it will pay for Christmas.

Why do you think the show is so popular?

It’s the working class humour/banter. People can relate to it. I’ve been in Glasgow and London and people have said “I know where that pub is.” But it’s the people they recognise, which is down to the writing.

What was the last great thing you saw on stage in Manchester?

Happy Days at the Royal Exchange – a great performance by Maxine Peake – and A Taste Of Honey at Oldham Coliseum –  a proper old play with no gimmicks.

If you were not an actor, what would you be doing?

I’d be retired now! I think my agent thinks I have!

Which are your favourite hangouts in Manchester?

My favourite pub is the Jolly Angler in Ducie Street, Ancoats: a real music pub and a cracking pint of Holts run by good mates Sheila and the late Michael Reynolds who always saw us right for a few pints when things were quiet. We had some great nights in there.

I rarely go out now. It takes me three days to clear my head. I might pop in the White Hart in Lydgate now and then for a pint of Timothy Taylor’s or a Marble Arch beer when it’s on or the Hare and Hounds on Shudehill. We like to go to Thaikhun Thai restaurant at the back of John Rylands Library. Great food and atmosphere. Or the Spice Lounge in Lees, a cracking Indian restaurant.

Early Doors is The Lowry (29 August – 15 September) and is sold out. An extra date has been added at Manchester Arena (4 October).