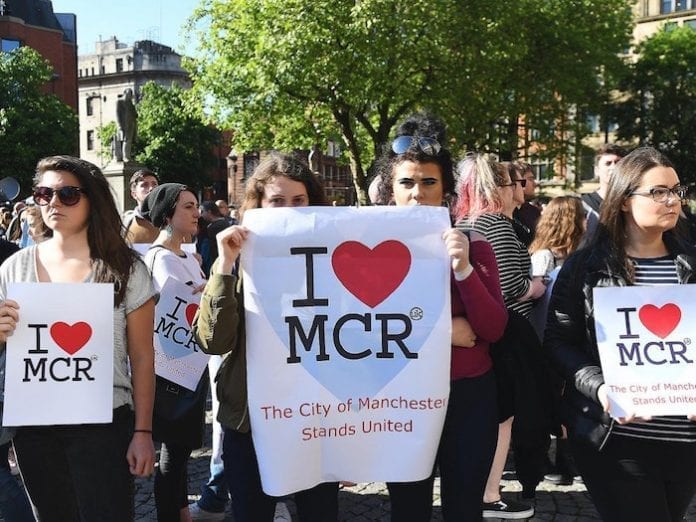 2017 was a year we can never forget. One event overshadowed everything else. On May 22, twenty-two innocent people lost their lives and many more were injured in a terrorist attack on the Manchester Arena. People’s lives were changed forever.

The eyes of the world were on the city for weeks as the people of Manchester came together to mourn the victims.  The atrocity brought out the best in people and gave rise to countless acts of courage and kindness. The Manchester bee became a recurring symbol of the city and of course I Love MCR once again became the symbol of defiance and resilience.

The floral tributes were eventually removed from St Ann’s Square and the city returned to some semblance of normality. But for many people affected by the Arena atrocity, life will never be the same.

It was a year in which homelessness was a big issue, with the new mayor pledging to end it. The year started with anti-homeless spikes being removed from the city centre and continued with people and businesses finding more and more imaginative ways to do their bit.

It was revealed that – get a lungful of this – Manchester is home to some of the most polluted roads in the country.

It was a year in which a historic pub threatened with demolition by Gary Neville’s St Michael’s development was saved after thousands of people signed a petition and the plans resubmitted.

Mobike and Quidditch came to Manchester and Engels came back. Dinosaurs came to intu Trafford Centre.

The general election proved that Manchester is definitely red, at least when it comes to politics, and the town hall closed its doors for refurbishment.

Emmeline Pankhurst was voted the greatest northerner and we sponsored Fletcher Moss Rangers under 7s.

And there was a Manchester first to celebrate – the world’s first Greggs drive-thru.

It was a year of accolades for Manchester. Here’s just a few. The Sunday Times called Manchester the most exciting city in the country. Manchester was named the best place to live for culture and nightlife, the top shopping destination outside London, the best city to live for millennial’s, the second best city in the UK to work, one of 15 unforgettable cities, and the place for a perfect city break by GQ. And Ancoats was named the hippest place in the country.

It was a year of food, food and more food. Lots of bars and restaurants opened and some closed.

Real Junk Food and a happiness cafe opened, but sadly a gravy bar turned out to be an April Fool’s joke.

And Manchester got its very own sooper hero.

Did somebody say gin? Because it was the year of gin. Loads of it, with not a bathtub in sight.

You could take your pick from Salford gin or Didsbury gin or We Love MCR gin. Or you could make your own. There was gin heaven, hot gin and tonic, and a new gin and steak restaurant. There was even a gin festival under the wings of Concorde at Manchester Airport.

And, of course, it was another year of remarkable people doing remarkable things. Like the woman living on £1 a day to raise money for African children. The man who gave free haircuts to homeless people. The mum who cooked Xmas dinner for the lonely. The man who cycled from London to Manchester in a day for charity.  And the woman who travelled 4617 miles to visit Manchester.

The contrast between the 1996 IRA bomb and the Arena terror attack speaks volumes about how the nature of terrorism has changed. Most importantly, it shows how Manchester found love and fought back.

Tony ‘Longfella’ Walsh recites his poem This Is The Place during the Manchester Arena terror attack vigil in Albert Square.

Ariana Grande was the first recipient of a new honour bestowed on people from outside Greater Manchester who have made a significant contribution to the city.

Is this Manchester’s most hipster football club?

There’s something quite refreshing about hearing a group of football fans chanting about hummus and quinoa instead of ‘You’re going home in a St. John’s Ambulance’.

Manchester and Salford became the first cities outside Asia to adopt high-tech Mobikes for making short trips across the city centres.

The Man v Food legend came to Manchester. “What do I love most about Manchester? The people, without question,” he said. “Second honourable mention would be chicken and curry sauce on chips.”

Hulme:The Documentary tells “the proper, unheard story of Hulme from those who have lived through two huge regenerations.”

The End for The Odeon Oxford Street

Another Manchester landmark bites the dust.

Some people hate them. It looks like they’re in the minority.

What were your most memorable stories and events of 2017?