Local self-taught artist LoveArtPix has created a stunning new artwork over the passenger bridge at Victoria Train Station to welcome commuters and visitors to Manchester city centre. The 30-metre mural bears the words ‘I LOVE MCR VICTORIA’ in striking yellow letters on a dark background surrounded by Manchester bees.

Dez from Manchester, who goes by the artist’s name of LoveArtPix, was commissioned by Northern, who manage Victoria Station on behalf of Network Rail. They asked him to create something that was Manchester focussed and to bring some colour to the dark footbridge.

“Manchester is a cosmopolitan, international city and this side of the overbridge is the first thing you see when you get off the train and head up the stairs to exit the station,” explains Dez.

Inspired by the black and yellow of Manchester’s symbolic ‘worker bee’, the eye-catching new scheme offers a ‘neon’ vibe. Buzzing bees are depicted within the artwork and one incorporates the colours of the rainbow to represent Manchester’s diversity and culture.

Dez hopes that this artwork will become as instagrammable for Manchester as other art installations in cities across the globe such as ‘I Amsterdam’ etc. He also imagines people might take a selfie in front of one letter that matches their initials (great for selfies on social media using the official hashtag #ilovemcrart)

The LoveArtPix artwork also comes with it’s own plaque which reads “Artwork created for and inspired by the colourful people of Manchester – the heart and soul of the UK. #ilovemcrart Designed by autistic artist Loveartpix ‘The gift in the curse.’ ” 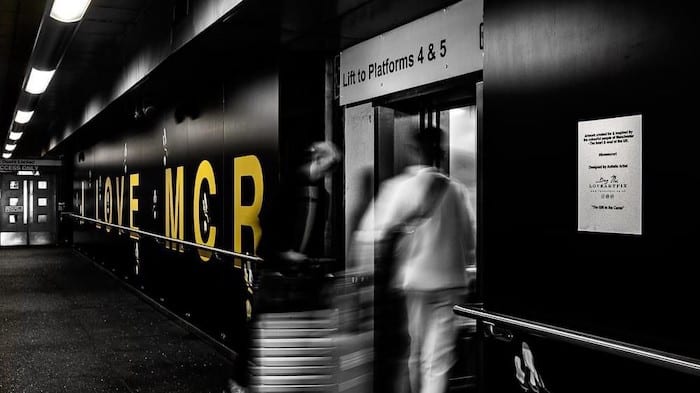 Dez is keen to use his platform as an artist to help people gain a better understanding of autism and non-neurotypical ways of thinking and hopefully help break some of the stigma attached to the condition.

“I could have just put ‘designed by artist’,” he explains, “but I wanted to add ‘autistic artist’ so that it stands out and highlights the condition.”

“ ‘The gift in the curse’ is how I see autism and society. I feel the unique way the neurodivergent mind looks at the world is a gift, but the way society had deemed it for so long makes it a curse.”

The new artwork complements an earlier piece by LoveArtPix installed on the same footbridge which features well-known buildings from across the city centre. Dez’s artworks can also be seen at Oxford Road Station, the Nag’s Head pub on Jackson’s Row and his work also features on the columns of the memorial at Victoria Station to commemorate the victims of the Manchester arena bombing in 2017.

“Art reaches out and art speaks,” says Dez, who says that his work and the research that goes into it gives him a focus which can help him manage his autism.

Dez is hugely grateful for the opportunity he has been given by Northern and is very proud of his work but ‘a sensory meltdown’ prevented him from attending the formal unveiling earlier this week.

“This wasn’t an easy decision after all the effort put into creating this artwork and helping behind the scenes coordinating the unveiling,” admits Dez. “Not to mention how proud I am of my biggest public piece to date and what it represents – but I didn’t want to make my condition any worse.

“To everyone who took their time to attend, I am really sorry I couldn’t make it. The support I have received has been amazing, and I thank each and every one of you.”

The formal unveiling of the new artwork at Victoria Station was performed by Greater Manchester High Sheriff Lorraine Worsley-Carter.

Passengers who get off trains at Victoria Station and head up the stairs to the exit will be able to see the new ‘I LOVE MCR VICTORIA’ artwork in all its glory.

For more information about work by Dez and to read his blogs which detail how he manages to be an artist with autism, visit his website.