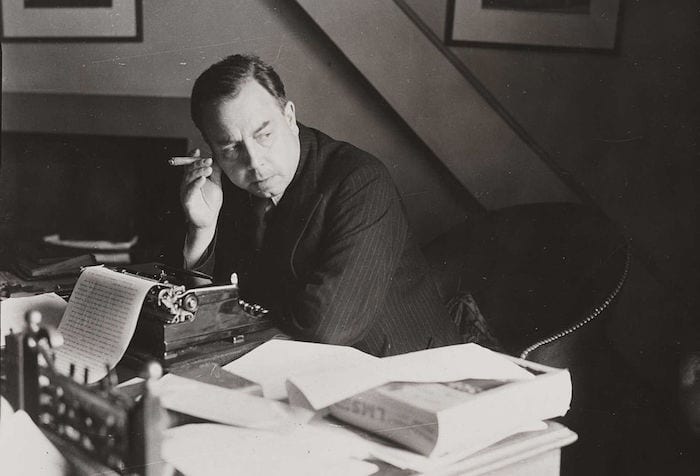 ‘I believe in Manchester because what really matters in the end is character, and Manchester has the right sort of character.’

These words extolling the virtues of Manchester and its people were written by a Yorkshireman –  novelist, playwright, scriptwriter, social commentator and broadcaster J B Priestley – 80 years ago in an introduction to Manchester. Heart of the Industrial North published by Manchester Chamber of Commerce.

His words were brought to our attention by a man who found the book whilst sorting through his late father’s possessions:

I came across a small book only today, just after the minute silence in fact. I guess from the publication date it must have belonged to my grandfather. J B Priestley might have written his foreword this week rather than eighty years ago. Don’t know if you’re interested, but I just wanted to share it. Reading it helped me.

This is Priestley’s introduction in full.

‘I believe in Manchester because what really matters in the end is character, and Manchester has the right sort of character.

Its history proves that in two different ways. First, Manchester has not only always faced adversity with courage, but has always contrived to assert itself triumphantly at what would appear to be the worst possible moment.

It is a mistake to imagine that the cotton trade, of which Manchester is the centre, has flourished without interruption until the recent slump. During the American Civil War, when the Southern States were blockaded, there was a cotton famine, and there have been periodic slumps since then.

Manchester’s answer to them has been to build its Ship Canal, triumphantly to organise its Jubilee Exhibition, to complete its impressive Royal Exchange during the difficult years of The Great War, and during the present slump to build a fine new Reference Library and to extend its Town Hall. No defeatism there.

In the second place, the character of Manchester is shown in the influence that it has had on English public life, social, educational and artistic affairs. I should estimate this influence as being equal to that of any other three English provincial cities put together.

When I was a boy living in Bradford, a city that shares some of the characteristics of Manchester, we thought more of Manchester than we did of London. And why not? Manchester then had the best newspaper, the best symphony orchestra and the best theatre in England.

We know that the geographical position of this city is a magnificent one, for it lies in the centre of a vast spider’s web of roads and railways and canals and has an outlet to the sea (my children are sailing his very autumn to California from Manchester), and really lies at the very hub and heart of a colossal straggling city that includes all the densely populated regions of South Lancashire and West Riding, and it has ample supplies of good water and coal and iron and power.

This is good, but character is better. Perhaps the secret of Manchester character is that it is nine-tenths hard north-country grit, solid Lancashire bone and muscle and brain, plus a remaining tenth, acting as leaven, of liberal-minded and enterprising foreign influence, a contribution from Europe.

You are not compelled to accept my analysis, but the smallest research will convince you that I am not wrong in my estimate of the character of these people. Go and talk to them, and you, too, will believe in Manchester.’