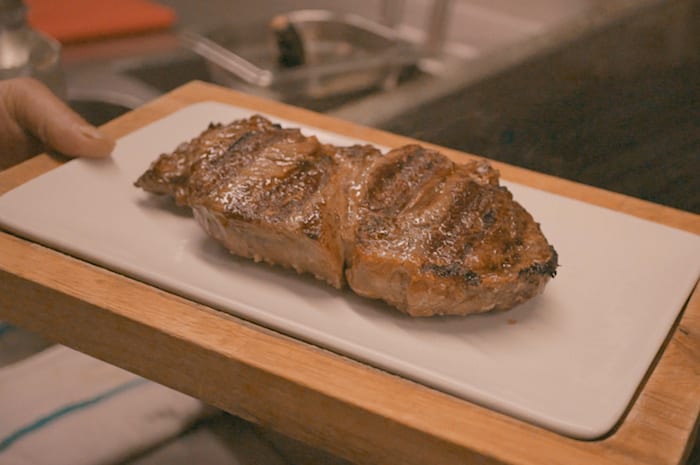 Roast dinners are nice and pies always go down a treat, but neither is as sumptuously special and meatily magical as a simple steak. A good steak, we reckon, is one of the purest pleasures available to carnivores.

Argentinians take their steaks very seriously. So do Gaucho restaurants. They serve up drool-inducing slabs of meat in the form of lomo, ancho, chorizo and cuadril which translate as fillet, ribeye, sirloin and rump. The top notch beef is wet aged, cooked at impossibly high temperatures, and served in a way that you just can’t replicate at home. We popped in to find out how.

The folks at Gaucho will tell you what sets them apart from other steakhouses is the fact that their meat comes from cattle reared on the plains of the Argentine Pampas. It’s wet aged and hangs for between 24 to 36 hours before it’s vacuum packed. This allows the beef to mature in its own enzymes which, in turn, allows the meaty flavour to intensify to the point of being, for want of a better word, magical.

We tend to go for the ribeye which contains 12 to 14% fat and is so good you’ll be making  strange, socially awkward noises as you eat it.

Salt Bae might know his way around a slab of standard beef but Anjum Iqbal, who’s been working at Gaucho for over 30 years, knows how to dish up a fillet steak thick enough to sink a small ship. The secret with fillet is the expert cut before it’s thrown on the grill. Anjum’s skilful craftsmanship cuts around the sinus before he butters with beef fat on one side and sprinkles with crunchy rock salt on the other. Smooth, simple and juicy as hell.

The second secret weapon is the grill on which the meat is cooked. It’s an enormous thing with grooves that lock in flavour at the same time as draining the excess juices. The meat sizzles as it hits the grill and then bubbles in browning deliciousness. The meat is turned and sprinkled again before allowing it to stand. The salt sprinkling for a second time will help to built up a deliciously crisp and savoury layer on the outside of the meat but maintain that decadently juicy inside.

The final part of this magical journey is the satisfying moment that it tickles your tastebuds. The crisp crust, the salty meaty interior, those beefy juices all make this perfect cut a top notch eat. It’s probably one of the reasons that steak pops up in so many people’s fantasy final meals. Well, a taste of the beef cuts here and you’d be forgiven for thinking that you’d died and gone to meatilicious heaven.

Would steak make it as part of your fantasy final meal?

For more information on how to cook the best steak in Manchester click here.