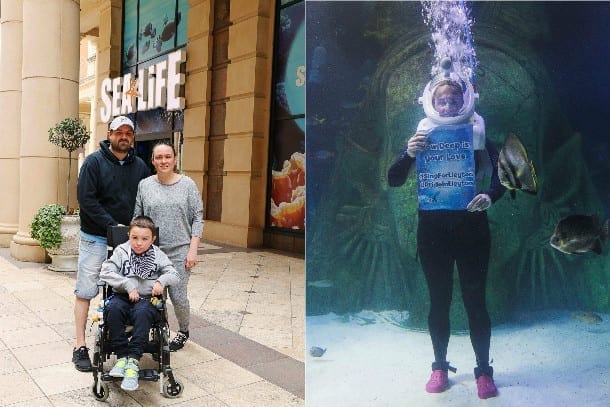 Joanne Coombes began campaigning earlier this year when Gary Barlow announced his intention to sing at someone’s milestone birthday and asked fans to persuade him over social media why their birthday is special. It didn’t take long for Joanne to decide to take the plunge and swim with sharks at Sea Life to raise awareness of her determination to get Gary to the party.

Lleyton was diagnosed with Niemann-Pick Type C, a rare, neurodegenerative condition shortly after his birth in 2006. The disease has no cure and Lleyton wasn’t expected to live past the age of three. Amazingly, he defeated the odds and will reach his tenth birthday on 17th December – a milestone his family never thought possible until now.

The campaign, Sing For Lleyton, has been gathering momentum with family, friends and supporters all coming together to grab Gary Barlow’s attention. Things are looking positive as Gary personally replied on Twitter recently.

Joanne said: “I’m doing everything in my power to ensure Lleyton has the most magical birthday party. I hope diving to the bottom of the tank at Sea Life will help raise awareness for my son and others with Niemann Pick disease. If anyone has any other suggestions I’m willing to give them a go!”

She added: “Lleyton really enjoys dancing and listening to music, he adores Gary Barlow – and Robbie Williams too!”

To join the campaign use the hashtag #SingForLleyton or to donate to the Pride of Lleyton appeal visit: niemann-pick.org.uk/get-involved/campaigns/pride-in-lleyton