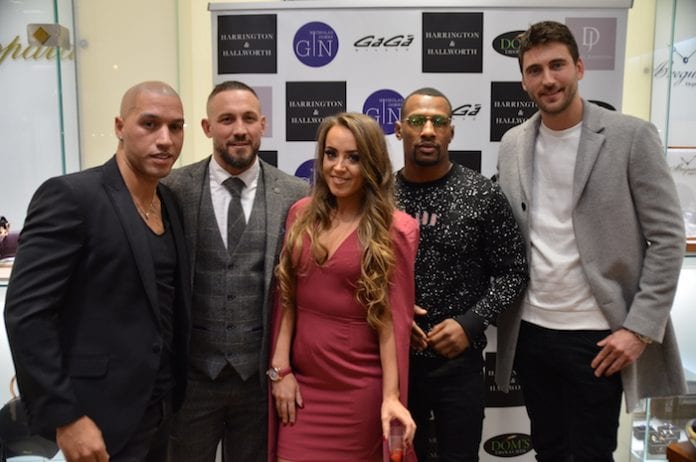 Manchester’s celebs turned out in force to support the launch of luxury watch brand GaGa Milano at Harrington and Hallworth jewellers at their Number One King Street showroom.

Joining him were a host of local celebs including James Davenport, better known as Shinny from The Shinny Show Live, who recently started filming a movie about his life with director Chris Green.

Also attending the private event were local artist Thomas Wolski whose recent work included designing a Manchester bee for the Bee in the City art trail that took place earlier in the year, MMA fighter Kane ‘The Danger’ Mousah and musicians Aaron Evers and Michelle McKenna from Platnum.

Singer Michelle, who was recently announced as an ambassador for the GaGa Milano ladies collection, brandished a stunning gold and pink watch which matched her outfit.

With Michelle’s partner – leading male grooming expert Daniel Johnson, a longstanding Ambassador for the brand – featured in their promo video which was shown to guests during the launch.

Best known as the man behind Real Madrid footballer Gareth Bale’s signature hairstyle, Daniel shared his excitement about the brand coming to Manchester.

“I am delighted that such a trusted and renowned jewellers Harrington and Hallworth are bringing the GaGà collection to Manchester,” said Daniel.

“There’s a real buzz about the watches and when you look at them you can see why. They are modern, unique and compliment any outfit.”

Hollyoaks favourite Jacob and James ‘Shinny’ Davenport were also both keen to show off their new watches – both now proud owners of the luxury brand – which also features a collaboration with Brazilian footballer Neymar Jr.

Taking the watch market by storm, GaGa Milano was created in 2004 – and since launching has opened flagship stores in Tokyo, Osaka, Hawaii and Brazil with footballing icon Neymar Jr announced as their worldwide brand ambassador last year.

The elegant watches were born from a simple idea of adding a strap to gentlemen’s pocket watches to wear it on the wrist – and now the brand’s products include vibrant and creative piece – with Manchester’s Harrington and Hallworth the first north west jewellers to stock the GaGa Milano range.

The collection has a line of everyday wearable pieces, including lines for men and women with the Neymar Jr limited edition and luxury jewellery pieces encrusted with diamonds for some extra sparkle.