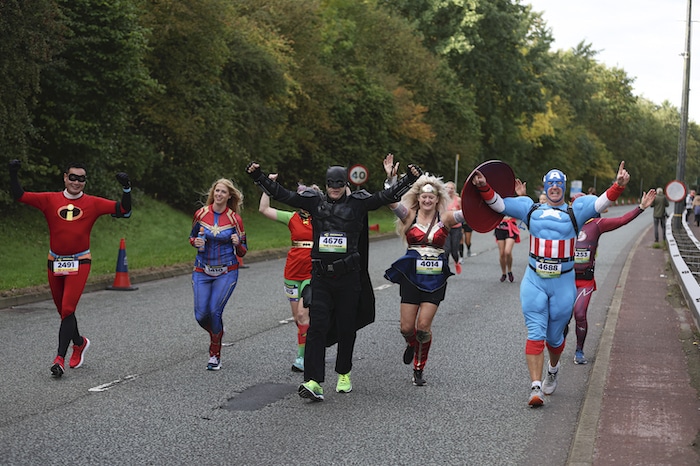 The sun was shining on Sunday as 11,000 took on the Manchester half marathon, raising nearly half a million pounds for charity.

This years event had a heroes theme, celebrating the amazing people who took on the new 13.1 mile route that winds its way through the city centre.

Organisers wanted to inspire others to get involved in the run, and to celebrate the many local heroes who do incredible things every day and don’t get the credit they deserve.

The Manchester Half, one of the most popular races across the North West is notorious for being flat and pacy, and the winners of the elite races showed this with some quick times.

Mollie Williams won the women’s elite event with a time of 1:13:46

David Sinclair, who won first place in the elite wheelchair posted an impressive time of 1:44:09.

Nick Rusling, CEO of Human Race who also took part in the event today said “Completing a half marathon is a massive achievement, and in my view there is no better place to do it than in Manchester.

“The community support alone makes this a fantastically welcoming event to be a part of, and combined with the flat course, it makes for an enjoyable run regardless of ability.

“All of the runners were heroes today with some having overcome great barriers, some running for their own personal heroes who were or are special to them, and some were simply their own heroes just for taking on the half marathon challenge.

“It’s been a privilege to join them today and share in their achievement. We hope to see them all back next year.”

The Manchester Half organisers put together a ‘team of superheroes’ including:

Runners, many of whom ran in fancy dress were treated at mile nine to a heroes welcome with a ‘hero cheer squad’ and DJ blasting out the motivational tunes to get them over the line.

The Manchester Half is one of the biggest fundraising events on the Cities calendar, attracting thousands of runners each year.

This year’s official charity partners were The Alzheimer’s Society, Cancer Research UK, The Christie and ABF The Soldiers’ Charity.

Feeling inspired? Why not get involved next year?

The Manchester Half returns on Sunday 15th October 2023 – and runners can sign up from Monday 10th October by clicking here.

1250 launch places are available and it costs just £35 to enter.