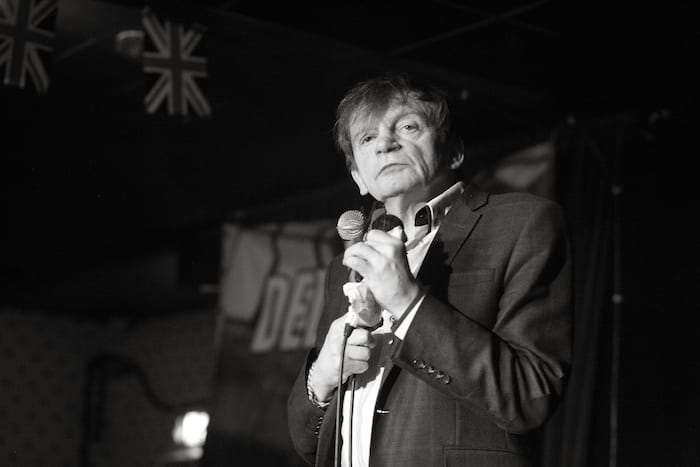 Mark has never been limited artistically or any other way by living in Prestwich and sitting in local pubs.

Over the years he’s stretched his mind – and ours – with a play Hey, Luciani about Pope John Paul I and a collaboration with dancer Michael Clarke in a ballet called I Am Curious, Orange. And some surreal episodes including appearing on BBC’s Final Score reading out the day’s football results.

I’ve interviewed him six or seven times, argued with him, taken him to an art gallery, and I’ve danced with him too. I have also eaten pizza with him at Coco’s on Fountain Street.

Most of all, I’ve respected him for his artistic achievement, The Fall’s thirty-or-so studio albums, and the way he has revolutionised the vocabulary of modern music. Amazing lyrics, tales of disorder, caustic dissections, hallucinations, wordplay.

He knows what he was going for, what he wanted The Fall to do, then and always: “I was just trying to do very basic music. Very savage music with intelligent lyrics.”

The lyrics often have more in common with novelists rather than other songwriters. His tastes include Celine, Arthur Machen, and H.P. Lovecraft. Maverick writers all.

“I like anybody who goes against the grain of mediocre mass thought” he once told me, though occasionally that claim doesn’t ring true. When he was recently on TV moaning about immigration, it seemed all too predictable. And, infuriatingly, for a group that could hit heights live, there have been too many Fall gigs collapsing into a chaotic circus.

Mark once claimed he gave a lecture on James Joyce at Cambridge University but I am not sure he has, unless he imagined or it was some kind of psychic episode. He has a few things he shares with that Irish thinker, drinker and wordsmith, though – a forensic ability to delineate the threads of life and death running through their hometowns and a dislike of dogs.

The Face was a glossy magazine big in the 1980s, by the way. London shite most of the time. He’s always raged at things that are all the rage. He was a regular at the Hacienda in its early days but when Madchester took off Mark went to live in Edinburgh.

As well as dogs, his malevolence has often targeted interviewers. I’ve been the object of his scorn but a long time ago I decided not to take it personally. It’s just how he is. He looks for weakness so the bottom line interviewing him is to survive and try to enjoy the answers.

My favourite Fall period is the very early 1980s around the time of Grotesque and Slates. But then one of the group’s finest songs Blindness dates from 2005. Whenever we have discussed the changing personnel in The Fall, Mark has always told me the latest is the best line-up yet. He doesn’t look backwards.

I get the impression Mark recently has felt a little under siege as ex-members of The Fall have published memoirs. And no doubt he’s also irritated by the media’s distillation of him into a drunken northern curmudgeon.

He’s had a rollercoaster of a self-made life for sixty years. For forty of them he’s been an intense onstage performer and a songwriter who’s influenced countless groups from American alternative rock acts like Pavement and the Pixies to one of the hot young bands of 2017, Cabbage, who supported The Fall in Liverpool in January.

The other week The Fall cancelled a couple of shows when Mark got poorly, so extra good wishes are in order. Happy birthday, the one and only Mark Edward Smith.