How to get drunk without the hangover: alcohol-free ‘spirit’ now available in Manchester

Ever thought how great it would be to be able to get drunk without having to worry about getting a hangover? All the fun, none of the pain. Who wouldn’t be keen, apart from masochists of course?

Back in 2015, Professor David Nutt, who was famously fired from his UK drugs tsar post for saying horse riding is more dangerous than taking Ecstasy, caused a bit of a stir when he developed “alcosynth”, a synthetic alcohol that could remove the risks of hangovers, liver toxicity, aggression and loss of control.

He claimed it makes you feel tipsy but without any of the negative side effects of alcohol.

He also invented a drug called ‘chaperone’ which, when taken with alcohol, would act as a sober up pill. It would make it impossible to get drunk to the point of incapacitation – and would even allow you to drive home.

This might all seem extreme but, believe it or not, alcohol-free booze is a trend firmly on the up.

Decent non-alcoholic and Low ABV serves are becoming a regular fixture on London’s haute cocktail scene, with places like Dandelyan, Nine Lives and Duck & Waffle moving quickly to adapt to the new craze.

And now it seems Manchester bars are starting to get in on the action. The Ivy, Dishoom, Asha’s and newcomer Wilderness NQ are all adding carefully curated non-alcoholic and Low ABV libations to their lists.

There’s been plenty of experimentation by producers, from Seedlip to faux gins Ceder’s, Herbie Virgin, Stryyk’s Not Gin and Surendran & Bownes’ Labdanum, to faux whiskey Whissin and Stryyk’s Not Rum – all attempts to capture the experience of drinking spirits without any of alcohol’s altering effects.

Others are taking a different approach. Newcomer Three Spirit is a blend that promises flavour and mood enhancing properties, using a special combination of plants and herbs – and not a drop of the hard stuff in sight.

Its ingredients – spices, roots and herbs such as lion’s mane mushrooms, cacao, damiana and yerba mate – have been selected for their capacity to target specific brain receptors and create those positive tipsy feelings like reduced inhibitions and physical relaxation.

And now the magic liquor has landed in Manchester, promising to deliver all of alcohol’s cheeky, flirty, “Aren’t I hilarious?” effects without the crushing hangover that inevitably follows the morning after.

Adam Day, previously of Peggy’s in Salford but now based at Wilderness NQ, is the first bar manager in Manchester to put the experimental new distillate on his cocktail menu.

He gave us a sample of Three Spirit to try, which he’d infused with cherry wood to up the ‘spirit’s’ oakiness. It’s delicious – provided you’re a fan of bitter things. We are.

“Three Spirit have carefully selected everything they put in it to give people the sort of positive effects of drinking alcohol,” he told us.

But does it work?

“For me, the flavour works. The positive effects? I’ve not drunk enough of it to find out. I’m not sure how much you would. But I think the flavour kind of promotes that anyway because people taste it and go ‘it tastes a little bit boozy’, so then it’s that placebo effect that tricks you into realising it.

“My only criticism of it is that it looks a little bit murky, but it’s literally just like a straight infusion of a lot of things.

“It’s really tricky and it’s a really hard process to get right. Dave at Three Rivers has been trying to do it for a while and he’s doing all sorts of mad shit. He’s made his own liqueurs and stuff and they’re all amazing.”

After infusing the Three Spirit with cherry wood, Adam stirred it down with an Assam tea caramel to create a non-alcoholic Old Fashioned they’re calling Shelter.

It’s not the only non-alcoholic drink on Wilderness NQ’s drinks menu. Of thirteen cocktails available upstairs, two are teetotal. He’s also created a Highball with seasonal grape cordial for downstairs, which he plans to change every so often.

“We’ve [also] made a rhubarb pickle with soda and it’s just pretty great,” he enthuses. “The rhubarb pickle is just delicious, and it’s a way of getting that rhubarb flavour for a longer period of time as well.”

He agrees that the demand for Low ABV and non-alcoholic serves is definitely on the up.

“Something I really wanted to do was give care and attention to non-alcoholic drinks, as we did the alcoholic drinks on our menu,” he tells us. “I think it can’t be an afterthought anymore, which it has been for a long time which has been a shame.”

He’s certainly not alone in his opinion. Elsewhere in Manchester, bartenders at The Ivy and Dishoom have embraced leading non-alcoholic spirit Seedlip on their drinks lists in response to the growing market.

“The demand for it is rising,” says The Ivy’s Brasserie bar manager Jordan Vowles. “We’re selling a lot more of it than we would a couple of years ago.” 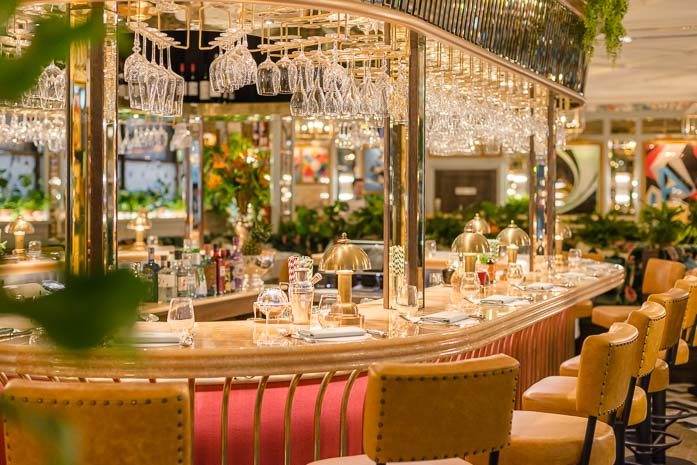 The glitzy Spinningfields bar stocks two out of Seedlip’s three classic blends and their three styles of non-alcoholic vermouth – dry, white and rosso – which allows them to offer a ‘Nogroni’ alongside their two listed non-alcoholic cocktails – the Grove Sour and Elderflower Garden.

“It’s opening up more opportunities for us as bartenders to play around a bit more and be creative with things that we’d never be able to do,” he tells us.

Where The Ivy’s Elderflower Garden is very herbaceous, the Grove Sour – made with fresh grapefruit, lemon juice and hibiscus syrup – is more fruity and citrussy.

Both offer a sophisticated non-alcoholic alternative to fizzy pop or dreaded apple juice mojitos, thanks to the use of Seedlip’s distilled dry spirits.

The bar has certainly been raised for non-alcoholic drinks, there’s no doubt about that.

Dishoom was one of the front-runners pushing the envelope for Low ABV and alcohol-free drinks.

Their cocktail bartenders are working with a “totally teetotal secret spirit essence” to help their customers avoid the risks of inebriation. It’s made in house and they are keeping the recipe close to their chest – a wise move considering the growing competition in the alcohol-free ‘spirit’ market.

It’s inspired by the Bombay Prohibition Act of 1949, which states that officials must issue permits for alcohol (and even then only in emergency cases) and has, controversially, never been repealed.

It’s rarely enforced nowadays, of course, but like everything else at Dishoom it certainly makes for a good story.

In a nod to this history, they have created a full list of sober tipples that don’t sacrifice  flavour or fun, showcasing how far things have come for the temperate among us.

Featured concoctions include the Virtuous Tulsi Sour (a peaty ‘whisky’ sour with warming aromas of ginger, lemon, holy basil, and a handful of secret botanicals), the Teetotal Hop Paanch (promising tastes of tobacco, leather and peat alongside hop-infused no-alcohol spirit, lime, jaggery, tea, and spices) and the Dry Monsoon Martini – their take on the Kate Moss favourite with an added chilli kick.

They also stock non-alcoholic beer Estrella Free Damm and a choice of alcohol-removed wines from Edenvale. Temperate elegance, it seems, is possible after all.

However, some of Manchester’s leading cocktail bars haven’t caught on to the trend yet.

Cottonopolis, for example, has pulled in loads of awards recently with general manager Gethin Jones being hailed as a sort of northern cocktail luminary, yet there’s not currently a single Low ABV cocktail on the menu (sorry, but we’re not counting the Seedlip G&T).

But whilst some are slow to catch on, it does seem that the days of tired, fruit juice heavy ‘mocktails’ are numbered  – and that can only be a good thing.