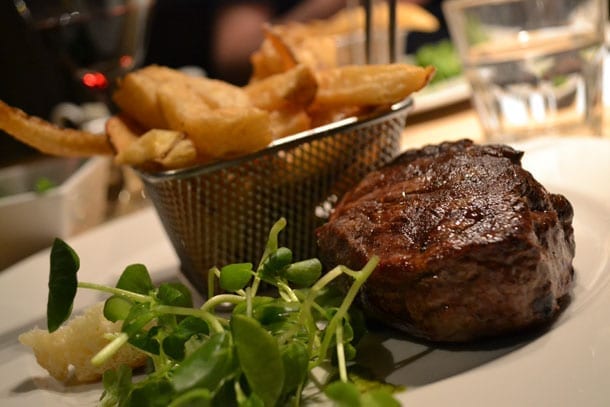 The restaurant scene is an ever-changing place here in Manchester, but 2013 was by anyone’s standards a pretty full-on year for new openings. With all this excitement, it is often easy to forget some of the stalwarts of the food scene that have kept us fed and watered over the years.

“…one of the most consistent restaurants on the Manchester scene – consistently good.”

And so it was with a sense of re-visiting an old friend that we headed over to Grill on the Alley on Saturday afternoon. As soon as we walked in, the familiar buzzing atmosphere hits you. The place was heaving. 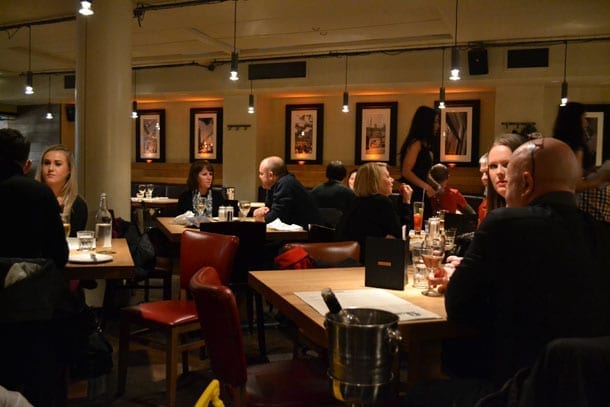 Sitting in the bar we ordered a couple of cocktails. The Elderflower and Gin Martini is exquisite, a rather strong start to a Saturday afternoon!

After a quick catch up with my mate, we were invited to take our table – the first booth on the left where we had a great view of the open kitchen with all the sights and smells that go along with that.

“…I can’t help but marvel at the service. It’s the one thing that makes me happy to head to Grill on the Alley…”

As we were handed the menus, I couldn’t help but marvel at the service. It’s the one thing that makes me happy to head to Grill on the Alley – it’s always good. My dining companion hadn’t been in since November, but Juris, our waiter for the afternoon even remembered the red wine my fellow diner drinks. Either he has that good a memory, or my fellow diner made that much of an impression! 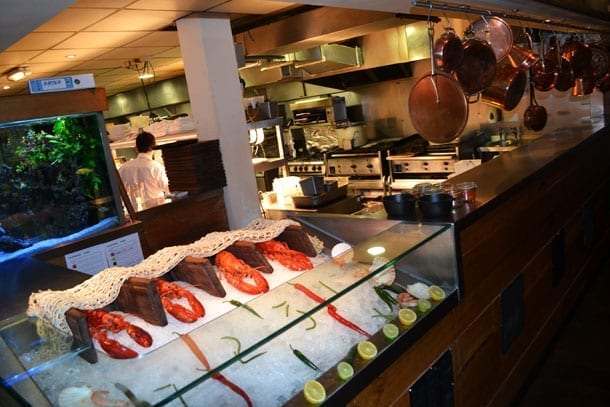 I opted for the waiter’s recommendation of the Mamuka Marlborough Sauvignon. Had I gone for the bottle it would have cost £27 – and would have been worth every penny.

We ordered bread and olives as we mused over the menu. Not being an olive fan I left those for my friend whilst I tucked in to the bread – warm, crusty yet fluffy I smeared it with the rock salt topped butter – let’s be honest I always leave the diet at the door of restaurants!

Juris was on hand to offer recommendations on the menu and explain the specials. I’ve always liked the specials cards that the Blackhouse group offer, a chance to try something a little different that few other places can do.

For starters try the Bang Bang chicken skewers. They come well presented and are so juicy. The spicy peanut sauce that accompanies them works well with the chicken. My only complaint – there just isn’t enough!

We had both been swayed by Juris’ recommendation for mains… the ‘Best of British’ special of Hereford Beef. Juris had told us the Hereford breed was one of the most popular and reading the menu card I found out even more…

“Dating back to the 18th century, the breed is recognised as one of the finest in nearly every continent. Well known for their wonderful temperament, the cattle avoid stress which in turn helps deliver consistent quality and impeccable taste.”

All impressive sounding, I thought. Sold to the slavering gents in the first booth on the left! As we sat contemplating this feast to come, I was struck by the price difference between the standard fillet, and this Hereford fillet I had just ordered. £22.50 for the standard, £35 for this fine beast currently grilling to medium on the grill for me right now.

Of course Grill Manc is famous for it’s Wagyu fillets at over £50 a pop… was this Hereford fillet going to live up the billing it’s been given?

Answer – yes. The knife simply glided through the steak as I savoured each stunning, perfectly cooked mouthful. It’s a cliché but it really was melt in the mouth. The beef flavour was enhanced by the char grill branding on the steak. And what flavour. If a lack of stress improves the taste then this cow was one chilled out beast! 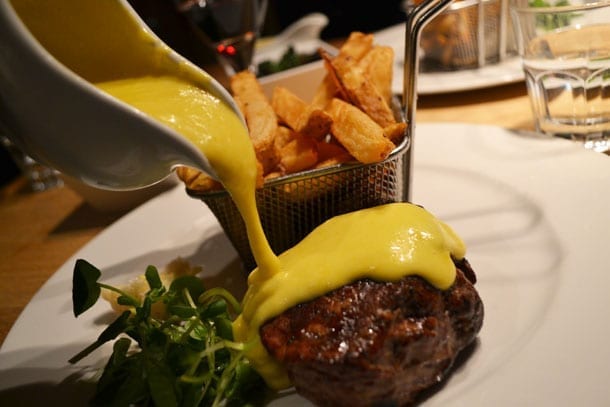 Some things just go together, and just like fish, steak just has to be accompanied by a nice chip. And here again, Grill didn’t disappoint. Crunchy on the outside and fluffy on the inside. As a chip aficionado, I was pretty impressed. I’m also a bit old fashioned when it comes to steak with sauce – if there’s béarnaise on the menu, you will find it on my plate. Here again, they didn’t fail, having just the right bite to keep me happy.

As our waiter Juris came past to check all was well, it was then that I looked at the rest of the staff across the restaurant – and there were plenty of them. There was never a moment when there wasn’t staff on the floor and I was impressed.

How do I follow this with dessert? I went with sheer indulgence. The Warm Chocolate Fudge Cake did everything I wanted it to do… it was rich, smooth and velvety. The mint leaf under the ice cream cam as a little surprise – mainly because I really don’t like mint, but it couldn’t detract from the divine chocolate I was enjoying. 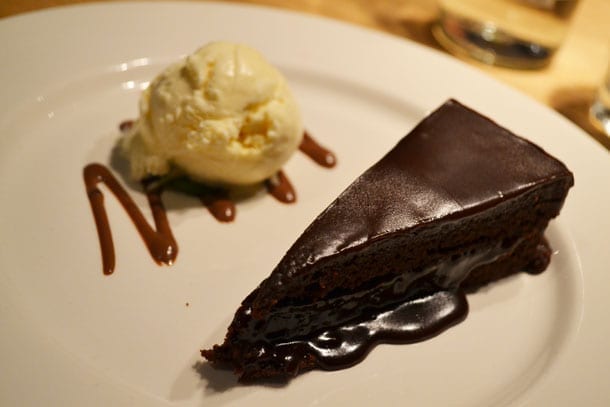 Consistency is hard to achieve in restaurants, but it has to be said Grill on the Alley is one of the most consistent restaurants on the Manchester scene – consistently good. Its little sister over on New York Street can certainly learn some lessons on that score. The ambience added so much to the afternoon, helped along with the open kitchen. By the time we were leaving at around 5.30 downstairs was already filling up and the next shift was arriving – we could see them being briefed in the kitchen – another example of Grill on the Alley’s eye for detail which permeates through the whole experience.

Re-visiting this old friend was a real pleasure today, and I was thrilled to see it had not lost any of its sparkle. New restaurants come and go, but it is clear Grill on the Alley is firmly here to stay. 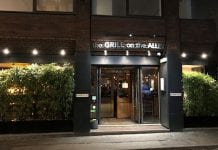 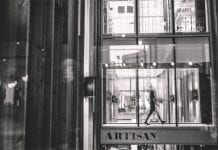 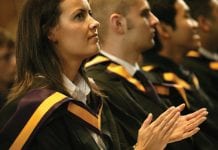