Great Northern Warehouse: A Brief History Of Manchester’s Not So Hidden Gem From 1899 To 2016 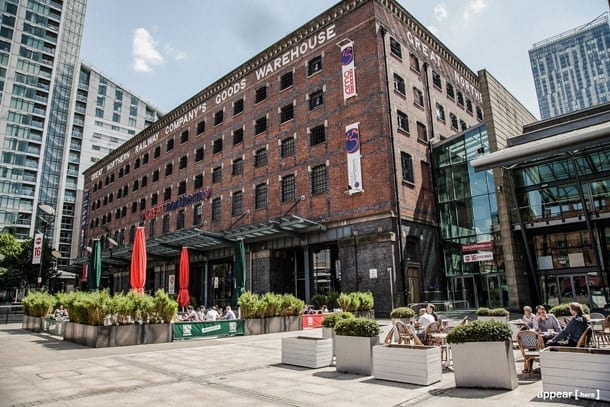 Manchester is a city of warehouses, a legacy of its past as the textile capital of the world and the world’s first industrialised city. It’s one of the many things which make it such a remarkable place.

Manchester city centre is full of warehouses. Textile merchants’ warehouses where merchandise was displayed and sold, and warehouses built close to canals and railway stations for the storage and distribution of incoming and outgoing goods, including the huge quantity of supplies needed to feed and support a rapidly growing population during the Industrial Revolution.

Manchester has so many warehouses concentrated in such a small area that it’s easy to take them for granted and not even notice them. But there’s one that it’s impossible to miss because of its sheer size and because its name is displayed in big white letters – Great Northern Railway Company’s Goods Warehouse. It’s so big it can probably be seen from space.

This gem of Manchester’s Victorian industrial heritage was built adjacent to Central Station which closed in 1969 and is now the site of Manchester Central conference centre.

It was built on a grand scale. 267ft long, 217ft wide, 75 ft high and five storeys high, with 27 windows on the east and west sides and 17 windows on the north and south ends. Nine acres of streets were cleared to make way for it. Completed in August 1899, it was the last and largest railway warehouse in Manchester,

It was one of the most advanced railway goods exchanges in the country. Trains arrived directly from Central Station on a specially constructed iron viaduct into a huge marshalling yards. Goods were raised and lowered using hydraulic power.

It was an interchange not just for the massive volume of goods arriving by rail but via the Manchester & Salford Junction Canal which ran 40ft below the surface, making it one of the few railway, road and canal interchanges in the country.

The canal was closed in 1922, partly filled and a section of the tunnel between Brunswick Basin and Watson Street used as an air-raid shelter during the war.

The warehouse closed for good in 1963 and left derelict until work finally began on a £100 million redevelopment in 1998. Buildings at the Peter Street end of Deansgate were cleared to open up the site and create Manchester’s first purpose designed and built public square since World War II.

Today, this imposing Grade II listed structure is a leisure and shopping development with bars, cafes, restaurants and a cinema. Mark Ashmore is its creative director. But why does a leisure complex in the centre of Manchester need a creative director?

“Because arts and culture is the bedrock of what makes Manchester great today,” says Mark.

“Manchester can’t and won’t live in the past. The Great Northern Warehouse was built in 1898, but the last two years has seen its resurgence as a power house in the middle of a city in cultural flux.

“We aim to lead in this city, which is why after launching with us in 2015, the Manchester International Film Festival returns for its second year in March. It’s spread its wings to Home and the Odeon, too, but its hub will be here at our very own AMC Cinema.”

AMC will show the premiere of Dennis Viollet – United Man on 3rd March, and both Sir John Hurt and Salford’s own Maxine Peake, who both star in the short film programme supporting the opening night’s film, will be in attendance.

So what else is going on at the Great Northern Warehouse?

“We have the biggest co-working space in the city with Central Working and indie coffee starlets Grindsmiths keeping those entrepreneurs powered with their award-winning coffee.

“If you need a business lunch or you’re on a date, we have James Martin, the guy from Saturday Kitchen. And if that’s not enough, we have the B.eat Street pop-ups. Junk Yard Golf is their latest guise, which has re-imagined what a pop-up can be, and this summer we will be hosting weekly B.eat Street parties on their own street in our Deansgate Mews area.”

The Great Northern Warehouse is one of the great Victorian warehouses of Manchester which have been converted to become some of the city’s finest hotels, apartment blocks, offices, restaurants and leisure facilities. A reminder of Manchester’s industrial past and testament to its transformation from a city in decline to a great city fit for the 21st century.