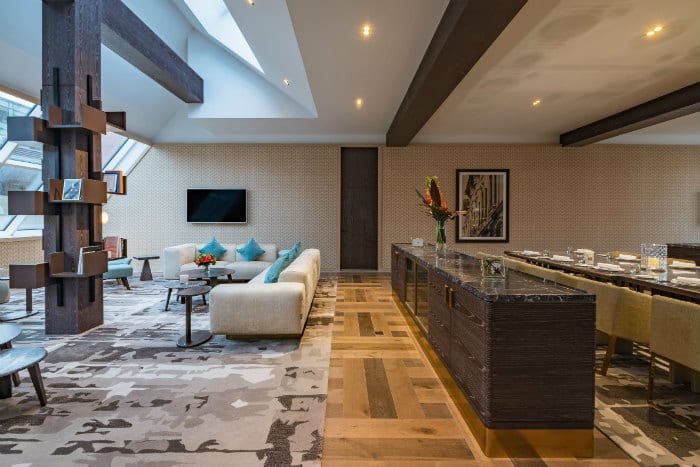 The Stock Exchange Hotel will be one of the most talked-about new openings in Manchester when it finally opens next month.

Having purchased the Grade II listed building six years ago along with hotelier Winston Zahra, Gary Neville and Ryan Giggs say their vision was to bring the building, a striking example of Edwardian architecture, back to life.

Originally opened in 1906 as the Manchester Stock Exchange, the venue is currently being meticulously transformed into a luxury hotel which is already a member of Relais & Châteaux, an association of 580 unique hotels and restaurants throughout the world owned and operated by independent entrepreneurs.

There’ll be 40 rooms, including two signature suites and a stunning 3,500 square foot penthouse residence as well as a restaurant overseen by Michelin starred chef Tom Kerridge.

And that penthouse is really going to get people talking.

It’s just gone on the market today for £20,000 a month, making it the most expensive rental not just in Manchester but in the whole of the North.

Offering what Giggs and Neville claim is the best accommodation available in Manchester, The House is an exclusive, fully serviced residence with its own roof terrace offering views over and across the Manchester skyline.

A fitness room completes this exquisite top floor residence, which owners say is ideal for both short and long term residency – assuming you have the budget, of course.

And the penthouse is underpinned by the full range of services offered by the team of the hotel.

“You want a home from home, only with better service,” says Giggs about the new residency in an interview in today’s Sunday Times.

The pair said they originally planned for the space to be a rooftop members’ club with a roll-back glass ceiling, but there isn’t the demand. “And it rains a lot in Manchester,” Giggs says.

So the space became a penthouse, with every tiny detail taken care of.

Breakfast can be laid out in the morning without disturbing guests thanks to a service lift at the back, observes The Sunday Times.

Dirty laundry can be whisked away with a call to the concierge, and will be returned freshly pressed within the hour. Additional services include everything from a chauffeur-driven car to the weekly shop.

And Giggs and Neville are certain that someone from the world of business, sport or entertainment will snap it up, they tell the Sunday paper, preferably on an annual contract.

It’s the “only residential penthouse apartment in Manchester with a five-star service department attached,” Giggs says in the interview.

And Giggs is no stranger to great service. At his favourite hotel in Dubai, he reveals in the interview, they know what he likes to drink (“cappuccino first thing, champagne before dinner”), and what he wants for breakfast (“poached eggs with a side of bacon”).

All these things appear “miraculously”, he notes, without anyone exchanging a word – which he believes is the secret of five-star service.

But what about that eye-watering price tag?

At £20,000 a month, the penthouse costs more than 20 times the average rent in Manchester (£940), notes The Sunday Times, and almost eight times as much as in central London.

There are other options for staying in the lap of luxury, of course, for those of us not on a footballer’s salary – though they still don’t come cheap.

Features include a walk-in wardrobe, a large lounge area, dining room and small fitness room. The Boardroom Suite can be extended to 2,300 square feet with the addition of an interconnecting suite that also includes its own private terrace.

Room prices start from £160 at the new Stock Exchange, with suites from £320 and signature suites from £650 per night. The hotel is taking room bookings now for dates from 15th November 2019, as well as for The Bull & Bear restaurant.