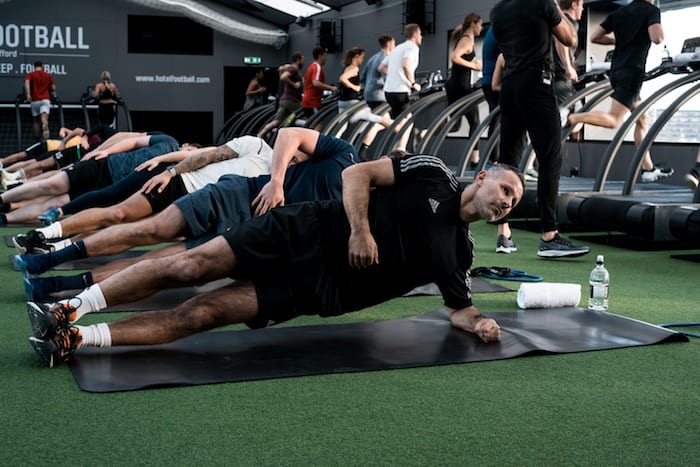 Sunday afternoon usually means a lazy day in front of the box, or an amble in the countryside before tucking into a pub roast. But it was a different story at Hotel Football this weekend.

Class of 92’s Ryan Giggs and Phil Neville took part in a special Barry’s Bootcamp class in aid of Foodinate, the social enterprise based in Manchester that tackles food poverty and homelessness in the UK.

Hotel Football is part of the GG Hospitality group, co-owned by Giggs and Gary Neville, and is one of Foodinate’s partners. People were invited to buy tickets for the special pop-up class (a second was announced when the first sold out within hours), which included the chance to work out alongside United legends Giggs and Neville.

With every ticket sold, two meals have been generated for local people in need in Manchester. 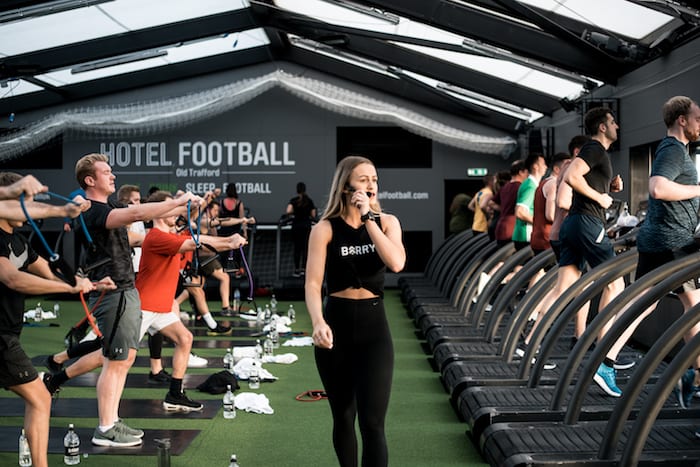 Arriving at the hotel’s rooftop space, Heaven, which is designed to look like a football pitch and overlooks Old Trafford, a DJ’s playing thumping beats while a lot of very fit looking people mill around in preparation for the hour’s class.

This is exactly what you’d expect given Barry’s reputation. The American export has a garnered a huge celebrity following, but while the veneer is uber-glamorous, the high intensity circuit classes shouldn’t be underestimated with claims you can burn up to 1,000 calories in an hour.

It’s exactly why I volunteer my other half to take part in the workout while I observe, take photos and count my blessings for making this very sensible decision. 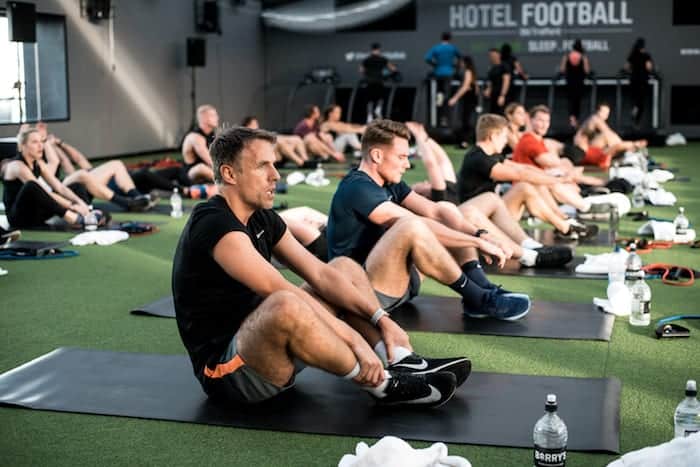 I also grab Giggs for a quick chat before the class.

“It’s important for everyone to do their bit. Manchester’s booming. You see the cranes, you see the buildings, apartments, restaurants, the first Michelin star in years. When I was growing up, there were two different places you could go out, Deansgate and Piccadilly, now there are so many different places and offerings, it’s just getting better each year.

“But if you walk around the streets, there are a lot of homeless people, too many, so it’s about enjoying the city and the boom we’re experiencing but also remembering the men and women who are less fortunate.” 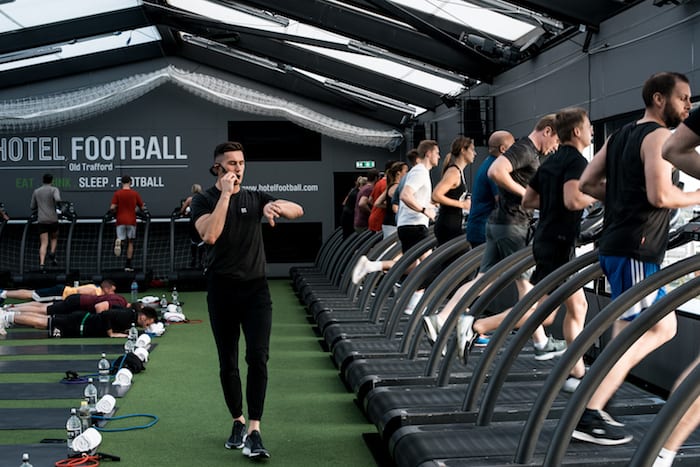 It was Gary Neville who got Giggs on board the Barry’s bandwagon earlier this year. “Gary used to go to the one in London when he was at Sky and told me about it, so when it came to Manchester, I tried it and loved it. It’s sort of my thing, really,” says Giggs, who’s now the Wales head coach but likes to keep in shape.

“I try and keep myself fit. It’s hard when you finish playing because obviously you’ve trained all your life, so you want to enjoy yourself, eat, drink, do what you want, but it’s a balance.”

At that point, the trainers from Barry’s, Mark Ross and Amelia Courtney, call up the troops via their hands-free microphones, and the group is assembled into two teams, the first on the treadmills, with amazing views across to the stadium, and the second on mats to do all sorts of intimidating strength and core work, before they swap over.

The music doesn’t stop for the next hour, nor do the words of encouragement from Mark and Amelia. Frankly, I’m exhausted just watching, but despite some red faces, everybody’s enjoying themselves.

Giggs and Neville, who’s another Barry’s regular, are both low-key and throw themselves into it, and even if they are out of puff by the end, they’re more than happy to pose for selfies. 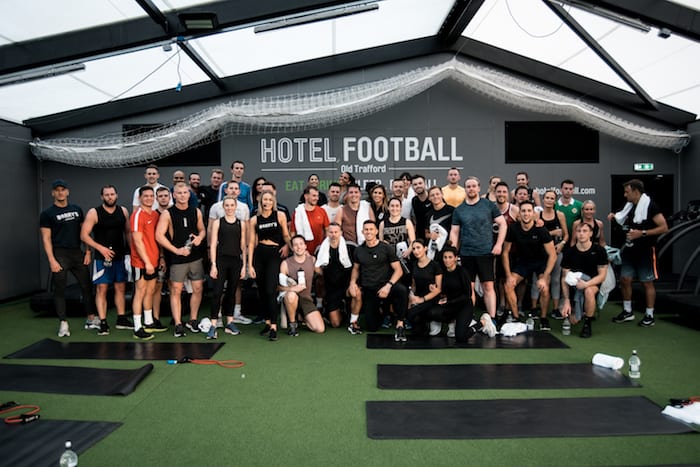 A trolley of delicious protein shakes is wheeled in, and then everyone’s invited downstairs to Café Football for Health Kick food and drinks where there’s a real buzz in the atmosphere. Caroline Stevenson, Foodinate’s founder, couldn’t be more thrilled with everyone’s efforts.

“For each person who attends a Foodinate event at Hotel Football, it results in a meal for a local person in need as standard, which is amazing, and has generated over 20,000 nourishing meals alone since March 2018,” notes Caroline.

“The Hotel Football team is always looking for ways to make their impact with us even bigger and better and help us raise awareness of our initiative. They’re so creative and passionate and this fabulous collaboration with Barry’s Bootcamp is a great demonstration of that.

“Each person who attended the workouts will result in not one, but two meals for local people in need.

“We hope everyone enjoyed working out alongside Ryan Giggs and Phil Neville, and that the post-workout soreness is eased with the knowledge of the difference they have made for the local community.”