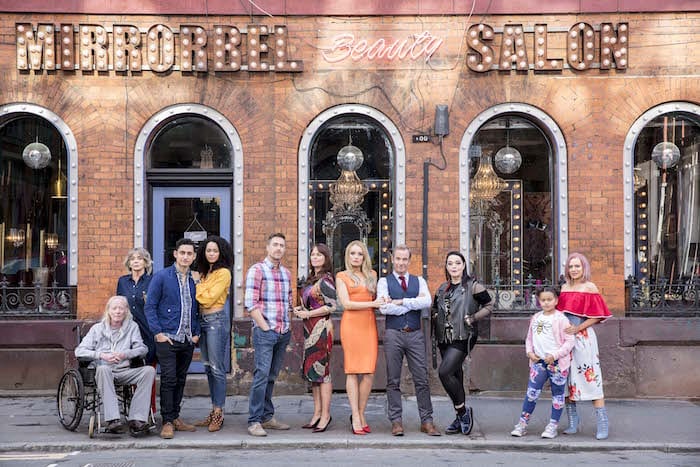 Acclaimed Salford writer Debbie Horsfield is one of the most in-demand writers in television. Her latest series Poldark has been a global success whilst Cutting It, her much loved show about Manchester hairdressers, was a smash hit, too.

Her new BBC One drama series Age Before Beauty explores a fascination with staying young, a fear of ageing, instant gratification and long-term relationships.

Made by Mainstreet Pictures (Unforgotten, I Want My Wife Back, Him) for BBC One, it’s a family saga set in a beauty salon in Manchester’s Northern Quarter which reunites the team behind Cutting It.

The series explores youth, age, instant gratification and long-term relationships in the beauty industry and was filmed in locations across Manchester last year. It will be shown on BBC One later this summer.

Married to Wesley for 25 years, Bel has spent the last 18 years as a homemaker and mum to their twins, but having just waved them off to university, now has a void in her life.

Enter Teddy, brother-in-law and long-time best friend, begging her to step in and rescue the family business – a down-at-heel beauty salon in Manchester’s Northern Quarter.

Like Bel, it could do with a bit of a facelift. And possibly a clear-out, since it employs her high maintenance family: mother Ivy-Rae (body building coach and spray tan technician), sisters Leanne (part-time nail-technician, part-time personal stylist), Tina (‘body artist’ aka tattooist) and Heidi (fillers and Botox, cosmetic surgery addict) mother to plump, 7 year old wannabe pageant queen, Disney.

Into the mix comes beautiful 20-something personal trainer Lorelei who seems to have caught Wes’s eye. Can Bel reconcile the demands of her business, her warring family and the problems in her marriage?

Family feuds and bitter rivalries, professional and personal, escalate as we follow the lives and loves of the workers in the salon amongst the Botox, fillers and face-lifts.

Will secrets and lies destroy the family – or liberate it?

It will be shown for the first time on Thursday July 26 at 7pm at The Lowry in Salford, followed by Debbie in conversation with BBC Radio 5 live’s Anna Foster.

The minimum age for attendees is 14 and 80% of tickets will be distributed to Manchester postcodes.

“Age Before Beauty is set in Manchester’s Northern Quarter and was filmed entirely in the city,” said Debbie. “Manchester is an integral part of the story and I’m thrilled that it will be premiered at The Lowry, in my home town, where Manchester people will see it first.

“Apply for your tickets now and come along to take part in the Q&A. We all had a ball filming in Manchester and I really hope you have as much fun watching it as we did making it.”

The premiere of Age Before Beauty is brought to The Lowry by the BBC in the North and Royal Television Society North West.

You can apply for free tickets through a ballot via the BBC Shows and Tours website.