From the city of Pankhurst with love: the heartfelt handwritten message inspiring Manchester 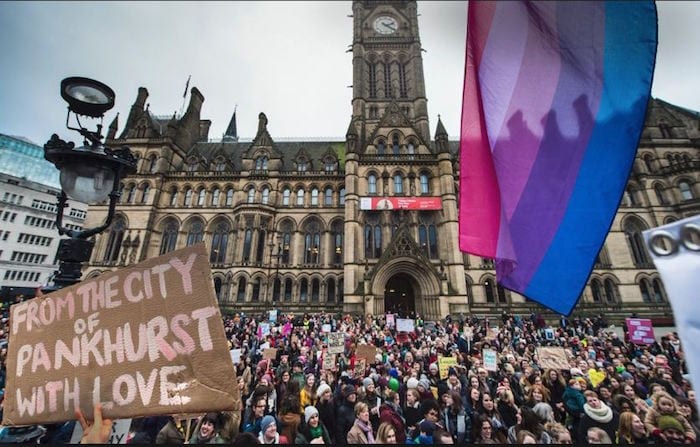 When Donald Trump was inaugurated in January 2017, many took to the streets in protest. Hundreds of thousands of women marched in 161 cities across all seven continents, with hundreds of Mancunians attending a rally in St Peter’s Square.

One particular image of the Women’s March in Manchester stood out: a painted sign simply reading “from the city of Pankhurst with love.” The sign was painted by Caroline Dyer, a fundraising campaign manager for the charity Action Against Hunger.

Caroline left her placard behind with the others in Albert Square after the protest, but unbeknownst to her The People’s History Museum rescued it. It is now on display in their exhibition Represent! alongside an original Pankhurst banner, marking 100 years since some women got the vote.

The hastily-painted sign captured the public’s imagination, and was even immortalized in Lego.

“I created the original sign on the back of IKEA packaging with paint samples as I rushed out the door,” admits Caroline. “So I was happily surprised to have so many people on the day of the march ask to have their photo taken with it.”

While Caroline was surprised by the impact of the banner, which was mentioned across the media, she is pleased that people engaged with its message.

“I imagine the people asking to have their photo with it felt the same as me: proud Mancunians, or adopted Mancunian in my case, giving a knowing proud nod to our past and a clear message to all who stand in the way of equality,” she says. “This city has women’s rights in its DNA and we are only just getting started.

“The second reason for the message was to send a message of solidarity and hope to women and girls around the world suffering from inequality who need to feel a bit of love and a reminder they are not alone. Pankhurst didn’t give up, and neither will we.” 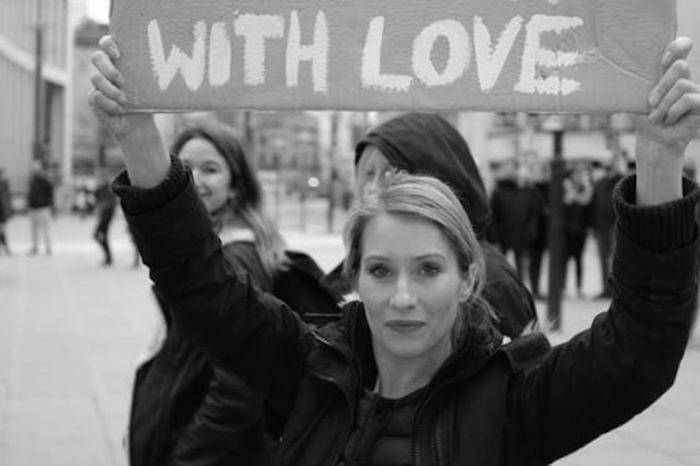 While registering for an International Women’s Day event at The People’s History Museum, Caroline realised they were using an image of her placard to promote the event.

“I discovered the museum had collected it after the rally and it is now on display in their exhibition alongside one of Pankhurst’s own banners, which was pretty amazing for me,” she says. “My A level history teacher would be thrilled that I was actually listening to her after all!”

Caroline found seeing her placard being displayed in the same exhibition as an original Suffragettes banner made over 100 years ago an emotional experience. When people started telling her how much they’d like their own copy, she saw a chance to help others.

After several requests for replicas, Caroline decided to create 100 limited edition A2 screenprints celebrating Manchester and its proud history of women’s rights, each one signed and numbered. Profits from each sale will go to a local women’s refuge in Manchester. 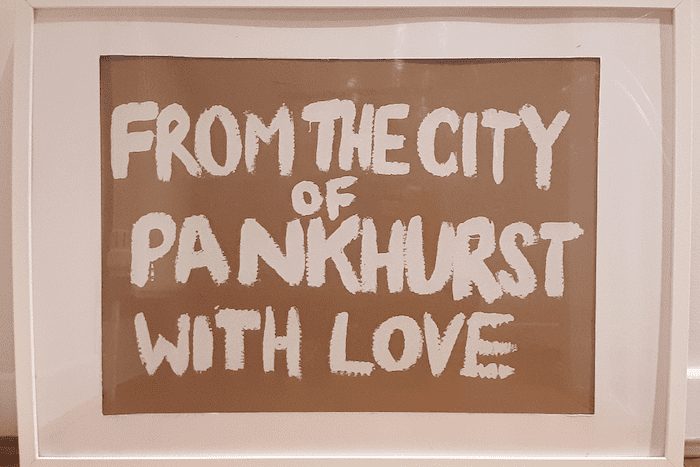 “To have complete strangers contact me to ask for a copy and tell me some moving stories as to why they want this print to feel inspired not to give up, well, I’d be lying if I said I hadn’t shed a few tears and lost a few hours sleep thinking about how enormously privileged I am to be able to speak out when millions of women around the world can’t,” she says.

“It’s exactly why I want to raise money for a local women’s refuge. These are exactly the people who find it extremely difficult to raise their voices, which is why I have a duty to.”

Caroline is well aware that there is still a huge way to go in terms of women’s rights, both in Greater Manchester and beyond.

“You just need to go down to Fallowfield to see the ‘pro-life’ protesters who harass women and staff outside clinics that perform abortions to see that in everyday life, or look at the statistics in domestic violence against women in this city compared to others,” she says.

“More than a thousand more rapes were reported to police in Greater Manchester last year – that’s nearly three extra every day. Reports of sexual assault and sexual harassment, both current and historic, rose by 24% over the same period.”

While there is still much work to be done, Caroline nonetheless feels there is “a lot to feel encouraged and motivated by” in Manchester.

“I made the print for it to be displayed at home, work or wherever anyone most needs a source of inspiration and courage, as a reminder that although it sometimes seems impossible, there is hope for real change.”

100 prints are available in black on white or white on brown and printed on recycled Snowdon cartridge paper 300gsm, priced £25. Profits will go to a local women’s refuge in Manchester. If you purchase in the People’s History Museum shop, half the money will go to the museum to help them put on future exhibitions.