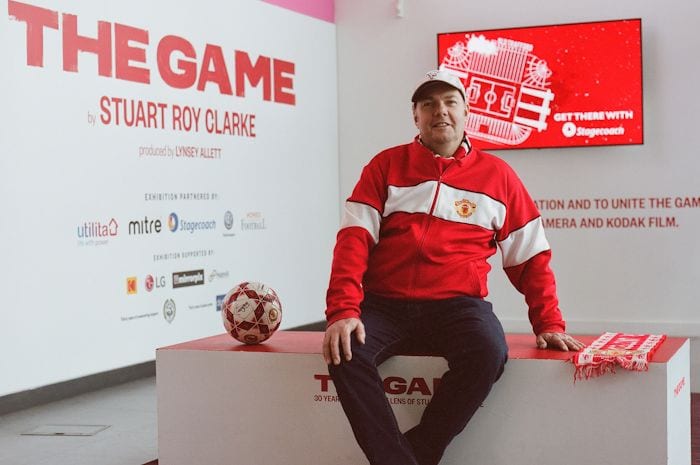 Stuart Roy Clarke has been taking photographs of the beautiful game since 1989. But they’re not the kind of photographs you see in the papers or magazines.

The photographs capture what going to the match is all about for the ordinary fan – especially the way it used to be before it become more of a middle class pastime and all- seater stadia became the norm for the top clubs.

His photographs document how the matchday experience has changed in the last 30 years for many fans. The fans in his photographs tend to be watching the game rather than taking pictures on their smartphones. And there’s not a prawn sandwich in sight.

Some of his favourite photographs are currently on display in The Game: 30 Years Through the Lens of Stuart Roy Clarke, an exhibition of his work at the National Football Museum which opened almost a year ago and closes this weekend.

A recent addition to the exhibition is a photograph of Manchester United fan Jimmy Langlands. Jimmy was recently named the region’s biggest football fan in a competition run by bus operator Stagecoach Manchester. As part of the prize, Jimmy had his photograph taken by Stuart at the museum.

Jimmy has been a United fan for 40 years. When he was a kid, his dad took him to watch Blackburn Rovers who were in the third division at the time and getting crowds of 10,000.

He had seen United on the TV, so when a friend of his dad got tickets for Old Trafford he jumped at the opportunity to go.

The first time he went to Old Trafford was on 6th October 1979. It was against Brighton and United won 2-0 (Coppell, Macari). He was 14 years old.

“When I went into the stadium I was like “This is it. This is where I want to be. I’ve been hooked ever since.”

Forty years later and he’s still going. He has had a season ticket in the West Stand second tier for the last 23 years.

Jimmy admits he’s been really lucky to have been a fan for 40 years. United have had their ups and downs in that time, but it’s been mainly ups, especially since Sir Alex Ferguson took over. Until then, he says, United were just a Cup team. But it wasn’t always plain sailing. He remembers the “Fergie out” chants.

His most memorable moments at Old Trafford are Paul Scholes’ goal against Barcelona in the 2007/8 Champions League semi-final second leg and Andy Cole’s winner in the last game of the 1998/99 season against Spurs, which sealed the first part of the treble.

The best game he’s ever been to is the FA Cup semi-final against Arsenal at Villa Park in 1999. His favourite players? Eric Cantona (his idol) and Jimmy Greenhoff (‘he always scored against the scousers’).

He’s glad Mourinho has gone and that Ole’s at the wheel but, somewhat controversially, he thinks David Moyes should have been given more time.

What he misses most about the old days is the atmosphere you used to get before the ground became all-seater.

“I watched from every stand around Old Trafford. When United had to go to all seater at the end of the 1991 season I was gutted as I love standing up at football.”

If you’re too young to remember what that was like, get yourself along to the National Football Museum to see Stuart Roy Clarke’s wonderful photographs. The exhibition finishes on Sunday.

The Game: 30 Years Through the Lens of Stuart Roy Clarke is at the National Football Museum until 17th March 2019. Free.