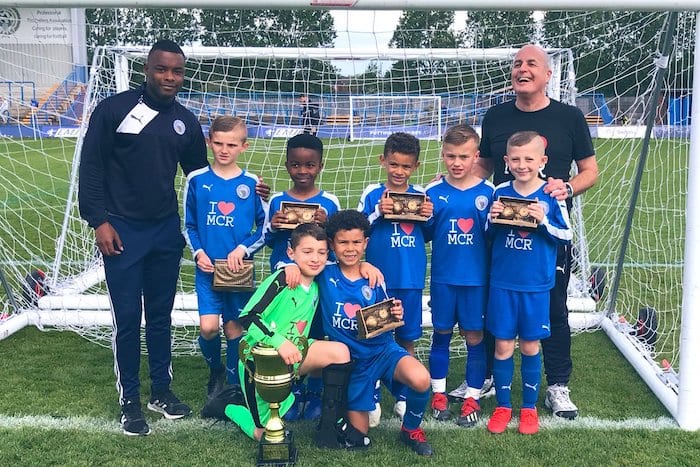 Yesterday was a huge day for Salford City. They beat AFC Fylde in the Vanarama National League Play-Off Final to win promotion to the Football League for the first time in their history.

It was also quite a day for another local club.

Fletcher Moss Rangers are the youth football club which has produced the likes of Wes Brown, Danny Welbeck, Jesse Lingard and Marcus Rashford.

The under 8’s team, which is sponsored by I Love MCR, is the most successful in the north west. They have played against all the north west’s professional clubs’ pre-academy teams and have a 100% success record.

Yesterday (On Saturday 11 May 2019), they beat Signol Athletic 7-3 at the Tameside Stadium to win the Primary Cup Final to maintain their unbeaten record, despite fielding a team without a recognised keeper.

Goalkeeper Zach Hook was out with a broken ankle so the other players – Archie Bunn, Denico Roberts, Kai Bedward, Kaylum Hardy, Jacob Norman, and Tyrell Edgehill – agreed to take turn in goals.

Fletcher Moss took a 3-0 lead at half-time, but Signol regrouped and scored two goals in quick succession to show they weren’t just there to make up the numbers.

Could we be in for a remarkable comeback like the ones we’d seen on TV this week?

The Fletcher Moss boys continued to play their stylish attractive football, entertaining the crowd. Some smart team play brought about a resurgence and Tyrell extended the lead to make it 4-2.

Moments later Deneco shot from distance to make it five but Signol pulled another one back to make it 5-3, putting the game back in the mix.

But the Fletcher boys dug deep and after an awesome piece of delicious interplay, Denico made it six. With little time left, Kai, who had been imperious in defence, decided he needed to get his name on the score sheet and broke Signol hearts, making it 7-3 at the final whistle.

Every player had played a part in making the cup final a grand spectacle.

The team will now break up but the boys and parents will remain lifelong friends, having shared some incredible moments throughout the last two years.

Now the boys will be taking their next steps on a new journey. Zach Hook, Kai Bedward, Jacob Norman and Denico Roberts will all be playing their football for Bury FC next season. Archie Bunn will be further down the road at Burnley FC, whilst Kaylum Hardy and Tyrell Edgehill are signing for Liverpool.

Two other squad members unable to attend today’s final, Lucas Warburton will also be signing for Liverpool and Noah Smith will be playing for Manchester City.

Nine very talented young boys, all getting the chance of a lifetime.

“Even though we are losing some brilliant kids from Fletcher Moss Rangers, we will say good luck to them all and should they want to return in the future, the ‘family’ will always welcome them back,” said development officer and skills coach Dave Horrocks.

“When they were issued with the I️ Love MCR kits, they were so proud to be part of the history of Manchester. This team was the first in the Elite team programme and have been more of a success than we could have imagined.”

Next season will see the next generation of elite players in grassroots football playing for Fletcher Moss under 8s, once again supported by I Love MCR.