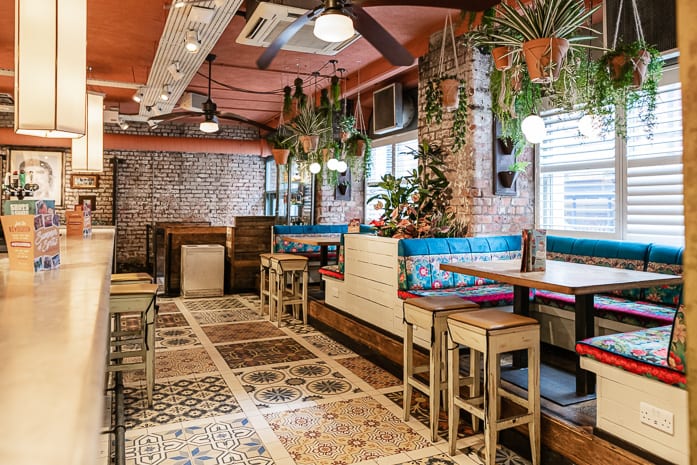 Revolucion De Cuba caused much consternation amongst their Manchester fans at the start of the month, following the news they would be closed for a revamp.

After all, it’s an incredibly popular site. Since opening in 2012 they’ve sold over 600,000 tapas dishes, 2.4 million cocktails and enough mojitos to stack up against Mount Everest a whopping six times.

Bosses promised it would return bigger, better and “more Cuban than ever” – but has it?

We went down this morning ahead of this weekend’s opening party for a first look at the new interiors.

Fresh additions include prominent staging areas to support the bar’s exciting new entertainment roster; plenty of new seating around the upstairs bar; and an array of hanging and tall potted plants which give the upstairs space a cool, tropical feel.

There’s also a new photo booth, surrounded by a ‘living wall’ of flowers and foliage, which takes inspiration from Havana and gives punters the chance to have a bit of fun and take home a unique memory of their visit.

Walking through the door, the first thing we spot is a chunky jukebox in the entrance hall.

“It’s the first thing that you see when you are in a bar in Havana, so that’s what we wanted to have here.”

Sadly it doesn’t work, but it certainly adds to the charm, teasing us with an unplayable display of Cuban and Brazilian hits.

At first glance, the main upstairs bar hasn’t changed that much. The dining room chairs, quirky tiled tables and brightly patterned booths lining the windows are unaltered and the bar at the back – its design inspired by a famous Cuban bar in Miami – also remains unchanged. 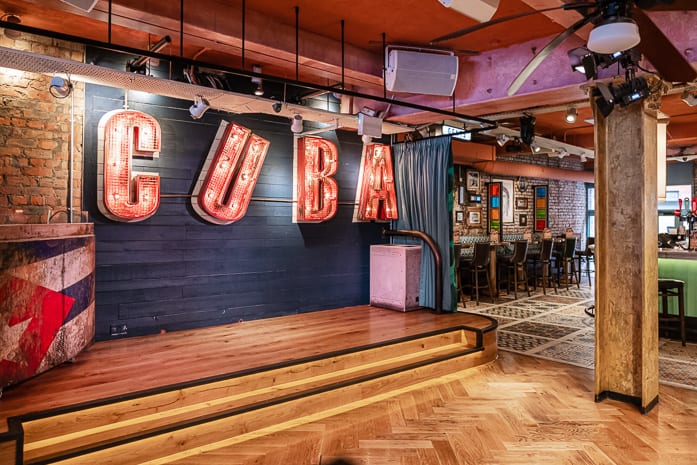 But the iconic Cuba sign, which appears in every one of their bars, has moved. Once tucked at the back, it’s since been placed centre stage to frame performances that will take place on the raised upstairs platform.

And plenty of new seating has been added at the side and the back of the bar area.

Between the additional seating and the creation of a new service bar separate from the main one, the bar is now fully 360 with customers able to order a drink no matter where they are standing. 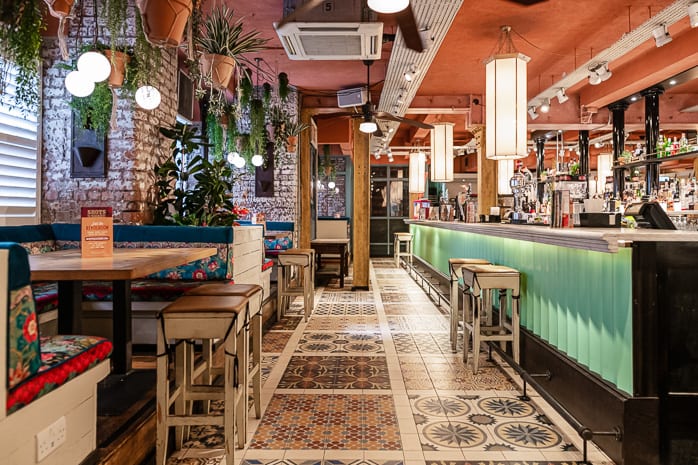 As one of the busiest bars in Manchester, this change is probably one of the most significant for regulars. After all, no one likes having to wait too long to be served at the bar.

There are also plans to create a specific beer section, too, so if you just fancy something quick and easy you don’t have to wait as long as a group ordering a round of cocktails. Nifty.

Downstairs, clear inspiration has been taken from the famous El Floridita fish and cocktail bar, found in the older part of Havana.

Deep red walls across the whole of the back bar make a strong impact as we make our way into the downstairs bar, or as our guide calls it the “piece de la resistance.” 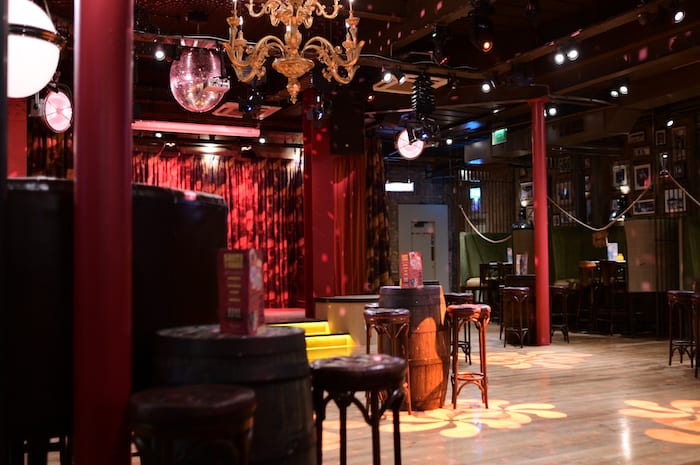 Old Bacardi posters dating back to the old days of 1862, when the company left Cuba for Puerto Rica after the Castro regime confiscated the company’s Cuban assets, line the ceiling in gilded frames.

The stage down here as been cut in half and raised up higher. They’ve added new podiums, brand new staging and LV equipment, and the floor’s been refreshed to accommodate their hugely popular Wednesday salsa night.

“On a Wednesday, this whole floor is just full of people dancing to salsa,” we’re told. 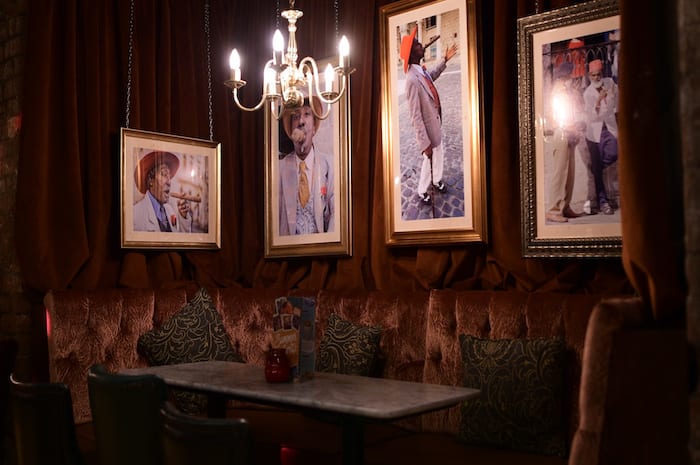 Tucked away in the back is the secret Havana lounge – which, for the most part, has remained untouched.

“The Havana lounge itself has always been rustic and kind of that hidden secret gem.”

Accessed via a secret mirrored door next to the new photobooth, inside lies a highly coveted collection of some of the most unique and rare rums across the UK – including Gran Patron Burdeos Anejo, Havana Maximo, and an ultra-exclusive bottle of Bacardi Maestro which will set you back £200 pounds a shot.

Apparently, there’s only two of them in the whole of the UK. 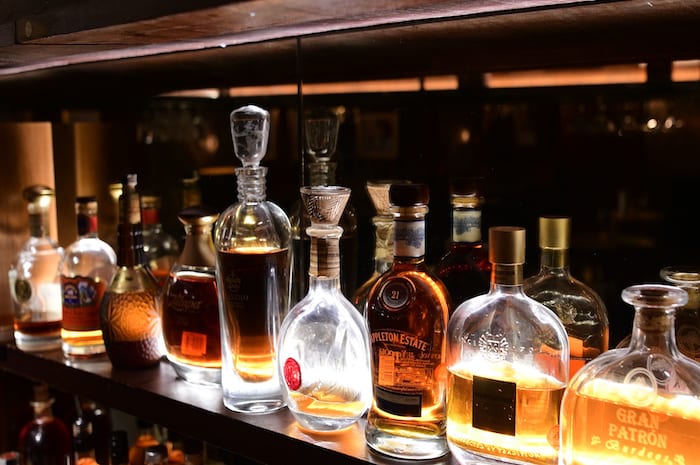 Offering a more luxury experience, the tables and booths are available to book with table and bottle service whilst the bar itself is dotted with golden pineapple lamps, the traditional symbol of hospitality.

“We’ve got a selection of our finest rums locked up in the cages, and then we’ve got our amazing rum collection there which is Manchester’s most expensive rums.”

Bosses have also made a significant investment in the back of house areas – fitting new kitchen equipment and updating things on the operational side in order to bring customers next-level service experience.

The hugely popular cantina relaunches this Friday with a huge launch party that will showcase a new roster of live, theatrical entertainment set to include samba girls, fire breathers and live drummers.

“You can’t go anywhere in Havana without hearing live music so that’s what we wanted to bring into the bar.”

“We don’t want people to just come in here and have a drink, have some food and enjoy entertainment. This whole thing of coming into a Cuban bar is a whole experience, not just coming in for a single drink.”

Friday’s launch is open to the general public and there are still some tickets left. To bag yours, head over to their website and enter your details into the signup form.