Prestwich Social, from the team behind the late-night bar The Liquor Store in Manchester city centre, has just opened its doors in Prestwich village.

The focus is on all-day drinking and dining, using ethically sourced ingredients, at the huge new suburban café bar which is decked out in summery shades of Santorini blue and sunflower yellow.

And it’s already going down well with the local community, who believe the brand new 5,100 sq ft venue is great for the area. 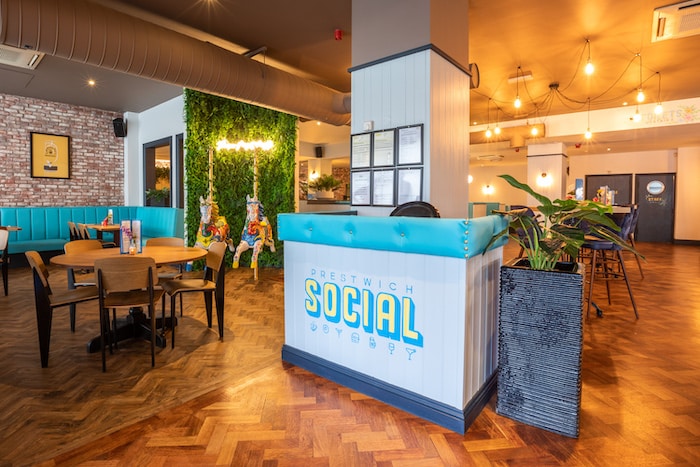 Where is Prestwich Social? 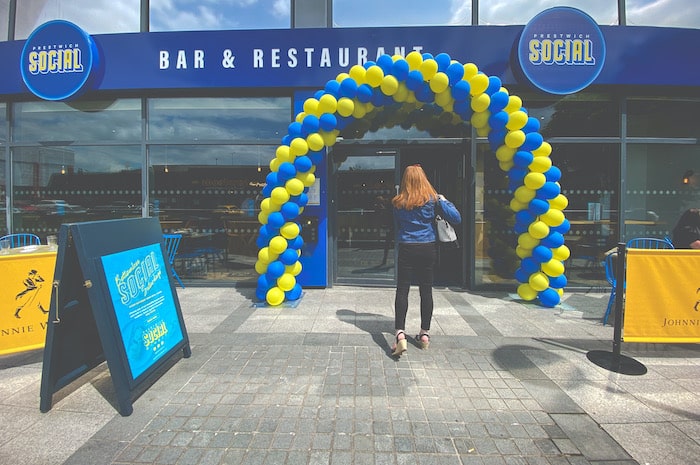 Prestwich Social took over the former Orange Tree unit on Fairfax Road, and one local says she much prefers it to the previous operator.

“It’s a lot better than The Orange Tree. Love the nods to Vimto and Manchester – my mum worked for Vimto as a child,” says Debs Darbyshire from Prestwich.

Breakfast and brunch in Prestwich 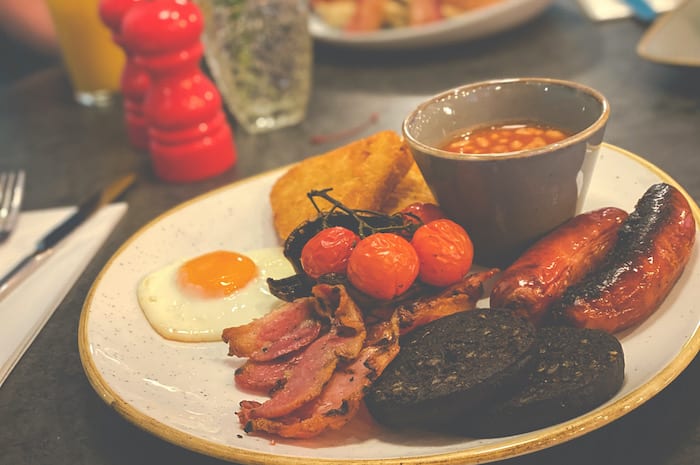 Open from 10am, locals can start their day with beautiful breakfast and brunch dishes (from £4.95) like smashed avocado and eggs (£7.95), shakshuka (£6.95), or fluffy American pancakes with crispy bacon and Maple syrup (£5.95) served until 2pm.

You’ll find plenty of local specialities on the menu, from Bury Black Pudding to Grandad’s Sausages, who are also based in Bury. 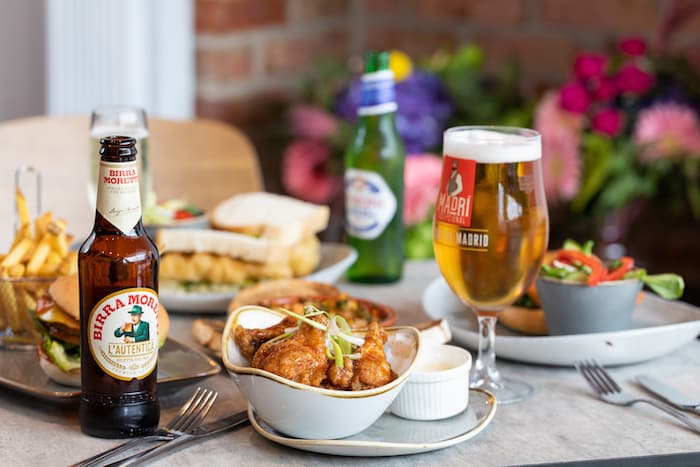 Later, you can tuck into an all-day menu including a homemade beer-battered fish finger sandwich (£7.95); salads (from £8.50) such as Asian salad with fresh shredded vegetables, chilli and cashew nuts; and small plates (from £5.50) like salt and pepper chicken bites, as well as larger plates such as Mediterranean linguine (£8.95).

There’s also a selection of burgers (from £13) including Southern fried chicken or a plant-based Beyond Burger option, alongside some hearty grill dishes (from £15.95) such as Peri Peri chicken, gammon and steaks.

“We’ve got a strong stance on the food being ethically sourced and local. We want the story behind our suppliers, such as where the meat comes from,” say founders Doug Waldron and Brett Collier.

“That’s important to us, and to the people of Prestwich.” 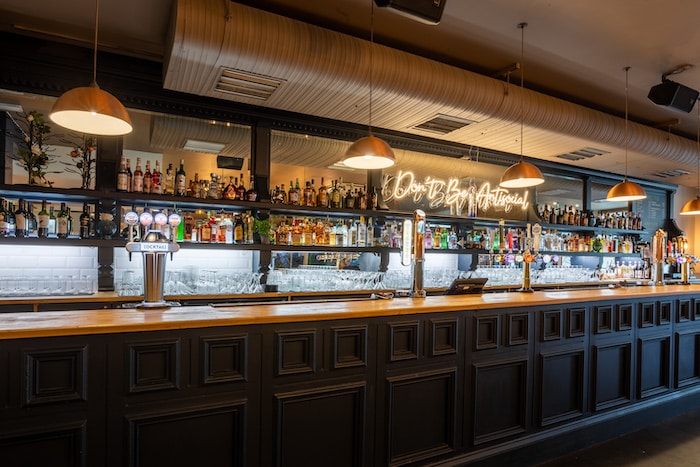 As the day goes on, it’s all about after-work drinks, with beautiful cocktails, craft beers and wines.

When it comes to the cocktails (from £7.95), you can expect “unique drinks that we created ourselves, with lots of fresh herbs and floral creations,” says Doug. 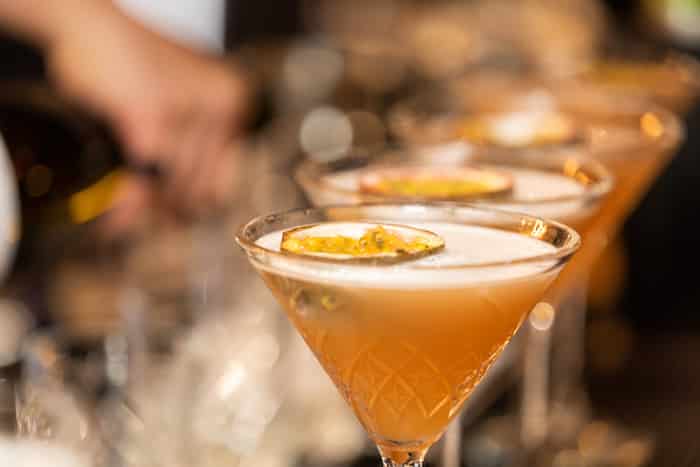 What are people saying? 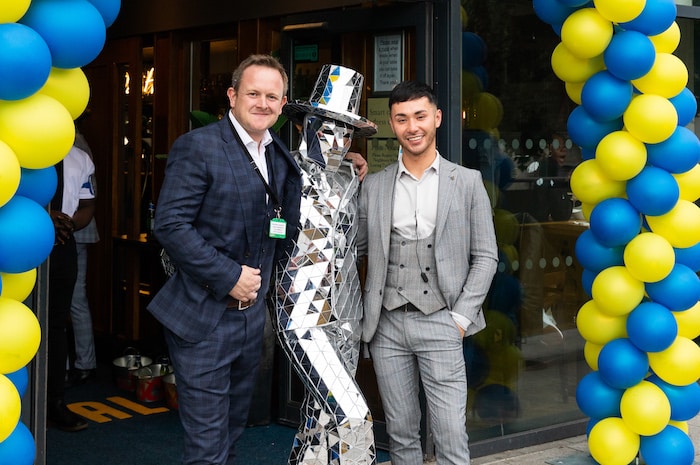 The service is unsurprisingly spot-on, thanks to Doug’s background in hotels, restaurants and bars and a natural sense of hospitality instilled in him by his father, who trained at luxury London hotel The Dorchester.

“Despite obstacles like government restrictions being extended, it’s been a really successful opening and we’re excited to be open,” says Doug.

“Locals seemed to enjoy the food and drink during the half-price soft opening period.”

Customer Michelle Slater from Bolton (“originally from Bury”) agrees, describing the new opening as “classy but not stuffy, and it’s upbeat with a nice fresh environment.”

The vast space is also inclusive and fully accessible, with plenty of space for pushchairs, prams and wheelchairs. 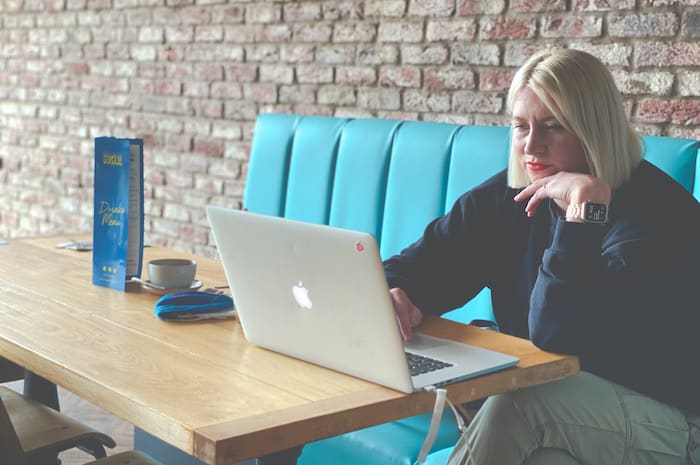 It’s a chameleon venue, switching effortlessly from business breakfasts, casual brunches and chatty lunches to a bit of glamour come the evening.

“Don’t be antisocial” encourages the neon sign above the elegant bar. Given the buzz this place is already generating, there’s no chance of that.

Prestwich Social is open seven days a week from 10am – 12am Sunday – Thursday and 10am – 1am Friday and Saturday. Find out more at prestwichsocial.co.uk