Saturday afternoon saw a historic moment in the evolution of women’s football as Manchester City’s women drew first blood in the first ever WSL Manchester derby.

When it was announced last year that United were re-introducing a women’s team into the Championship, it wasn’t just the fans on both sides of Manchester hoping they would gain promotion quickly to set up another great Manchester rivalry. City captain Steph Houghton and the rest of the squad were eagerly waiting for for the day to come too.

They wouldn’t have to wait long. United brushed the rest of the Championship aside and gained promotion to the Women’s Super League in their very first season.

The women traditionally play at the Academy in front of an average crowd of less than 1,500, but the decision was taken to move the game to a much more fitting venue – The Etihad. 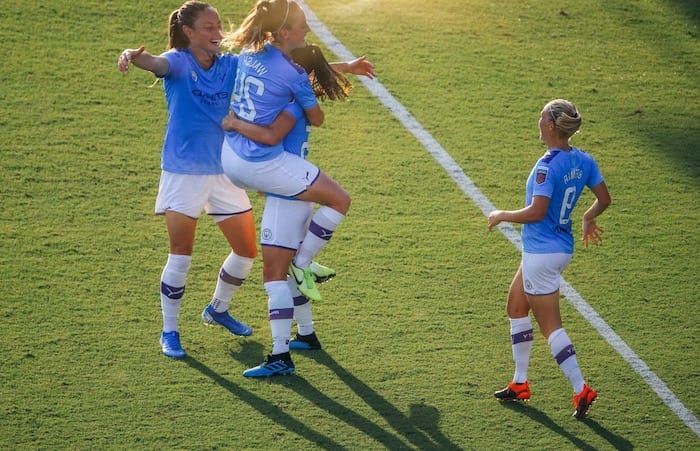 But with the potential for a poor attendance in a big seater stadium, it was crucial for the women’s game that the fans turned up.

Speaking ahead of the game, Houghton said she was hopeful of a good turnout and was looking forward to a first derby game.

“It’s a chance for fans to come and see us play at the Etihad Stadium for only the second time – and this time against our rivals – and we’re just hoping we get as many people through the turnstiles as possible.

“It’s exciting. I think everyone has been desperate to have a Manchester Derby in Women’s Super League and when United announced last year that they were going to have a team in the Championship who were targeting promotion, it was great to hear and so to have them in our league and for it to be the first game of the season is fantastic and will do our game the world of good.

“It’s a game that doesn’t have a history yet, but we want to create a history and that begins on Saturday. We want to make Manchester Blue, but we need to have the right mentality, work hard and use the crowd to our advantage.”

It turned out to be the right decision. The game was played in front of a crowd of 31,213,  smashing the Women’s Super League attendance record of just over 5,000.

Prior to kick-off, United were underdogs as they were newly promoted and the Blues were last season’s WSL runners-up and double cup winners. But in true Manchester Derby fashion, it wasn’t quite that simple.

United could consider themselves unlucky not to be in the lead at half-time after some positive attacking play but, thanks to some last-second defending and a great save from City keeper Ellie Roebuck, the Blues managed to keep the scores level.

The fixture may not have had a history prior to Saturday but the history books will record the first ever meeting between the two sides professionally was a Manchester City victory,  courtesy of a stunning 25-yard strike from Caroline Weir.

Weir had got into some good positions during the first half when the Blues were a little off the pace but just couldn’t seem to be able to get the ball onto the favoured left foot.

But that all changed in a much improved second-half performance. Taking advantage of a poor clearance, the City midfielder picked the ball up and unleashed a spectacular strike into the top corner. That proved to be the difference between the sides.

The game was great to watch and had everything you would expect from a Manchester Derby, with much to suggest that the newly formed rivalry will produce the kinds of games we all look forward to twice a season.