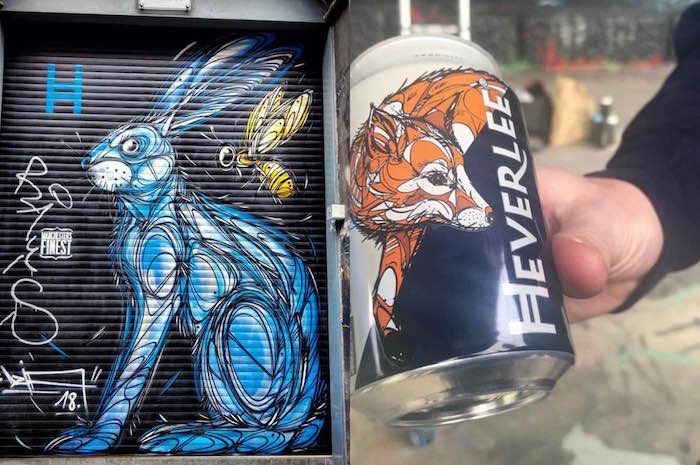 Admirers of this Northern Quarter street art will soon be able to find more by the artist on their beer cans this summer.

Antwerp-based creator DZIA is known for choosing urban settings for his wild animal murals, and his piece in this Northern Quarter doorway is no exception.

He painted the giant Belgian hare and Manchester bee on Lever street last November whilst visiting Manchester for a three-day micro-festival held at Mayfield Depot.

Now his distinct geometric wild animals will appear in bars across the city this summer, as Belgian brewery Heverlee roll out a range of limited edition cans for their beer in the UK.

The cans feature one of DZIA’s blue Belgian hares, similar to his Northern Quarter piece, alongside a bright orange fox.

And the beer inside? An easy-drinking, sessionable Pils style lager, its recipe is inspired by an old abbey beer once brewed by monks at Park Abbey in the master brewer’s hometown of Leuven.

Whilst the beer is not currently being brewed at the abbey, Heverlee is in the process of rebuilding the original 12th-century microbrewery within the ancient monastery walls and has plans to create some special limited edition brews there when it’s finished

First on the list? A small batch brew using a medieval weed flower that grows on the abbey grounds, their master brewer Joris tells us. Cheeky.

To get an abbey beer brewed on premise is rare nowadays, but you do still get Trappist breweries which use profits to support charitable and missionary work.

Heverlee is doing something similar by donating royalties from their beer sales to the restoration of the abbey, which was devastated during the First World War by the German army.

Thanks to its popularity with drinkers over here, they’ve donated enough to help the monks restore 160 ancient bells to their monastery and reconstruct their magnificent library, which saw 3,000 medieval books and manuscripts torched during the ransacking in 1914.

Fancy a piece of street art wrapped around your cold one this summer? Look no further.

Find the cans at Manchester bars including Elnecot, Trof, the Albert Hall, Corbieres, The Elk and Rustik this summer.