FCUM radio is the station run by the fans of the other United – non-league FC United of Manchester, the club created in 2005 by fans disillusioned by the Glazer takeover of Man United, and now one of the biggest fan-owned clubs in the country. A punk radio station created by the masters of punk football.

The club’s version of how the radio station started is that back in the early days, a group of fans claiming to be from FCUM radio turned up at the old Willows Stadium for a game against Salford City armed with a couple of cans and a piece of string. That got people thinking. Why wasn’t there a radio station for FC United?

It started off as a kind of experiment but with the growth of an armchair army of committed home and overseas listeners, the station has expanded and now covers every FC United match, including the women’s games. Back in 2013 they created an unofficial world record for the longest ever continuous football commentary, commentating for just over 24 hours for a charity five a side match. 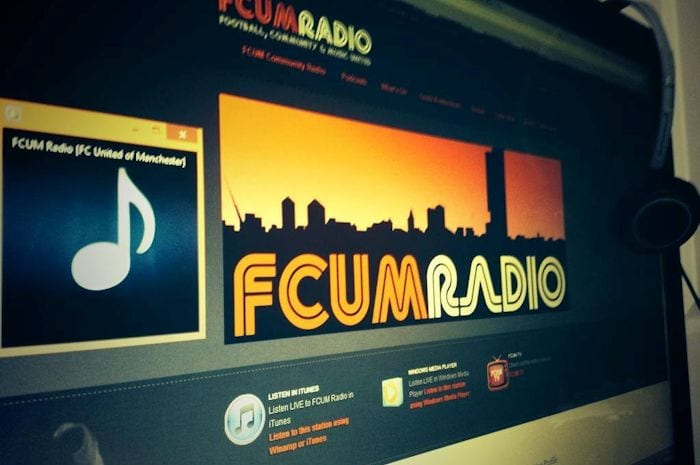 But there’s more to FCUM Radio than football. They’re big on music too, showcasing a range of new local musicians, as well as old favourites.

The involvement of two characters, Ben & Marv, led to the rise of the FCUM Radio Summer Proms, as well as the live YouTube show CellarTapes, which features live performances and interviews with local unsigned acts, proving that football coverage and musical culture can go hand in hand.

Of special interest to fans of the local music scene is Mancs, More Mancs & Even More Mancs, an hour long show dedicated to unsigned Manchester bands, presented by DJ Gladys Barm (not her real name).

“As long as I can remember I’ve always wanted to do my own radio show – or even have my own nightclub – but one where I choose the playlist,” says Gladys.

“Being a rabid Manc I like most of the classic Manc Bands and because I’m now doing my own show I’m discovering more and more unsigned bands whose tracks don’t get that much airplay if at all. So to accommodate them all I do a Mancs, More Mancs  & Even More Mancs special.”

The next one is coming up on 26 September. With groups like Death To The Strange and OK Broken, this is a chance to hear music at its most inventive – not something you usually get from football radio.

You can listen to FCUM Radio online. Podcasts of sessions are regularly uploaded and put on the YouTube channel with shows including This Club is My Club and Red Rebel Radio. They’ve even broadcast live from Manchester’s Retro Bar.

There’s something satisfyingly edgy about a station which describes itself as punk – and it’s just one genre of music played on a station known for a strong alternative music taste. From indie to electronica, there will be probably be something for you. So for a great taste of Mancunian variety, why not tune in yourself?
www.fcumradio.co.uk