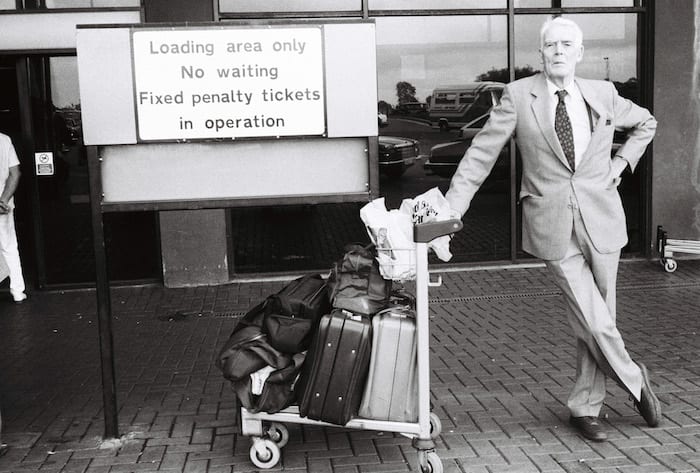 An exhibition at Manchester Central Library showcases how Manchester Airport used to look 30 years ago, courtesy of Shirley Baker.

Salford-born Shirley Baker, the photographer best known for her images of Manchester working class streets scenes in the 1960s and 70s, spent a day at the airport in 1987 capturing the experiences of passengers using the airport.

A collection of 60 of them are on display in the library until 6th January 2018. Many of them were chosen by members of the public and Manchester Airport staff.

Baker, who died in 2014, photographed various parts of the airport – six years before the opening of Terminal 2 – and took pictures showing how people passed the time in the good old days before smart phones, tablets and kindles.

There are lots of pay phones, cheap duty free, and people smoking in the departure lounge. The sartorial style of passengers is also brought into focus, with lots of curly perms and shell suits. And that’s just the men. 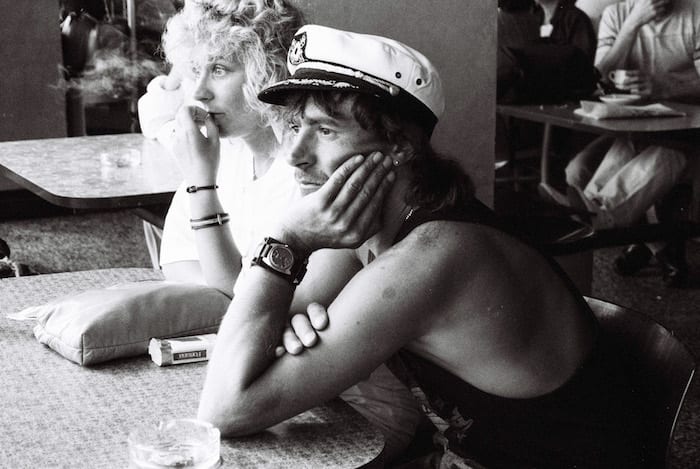 Notable among the photographs are views of the airport’s famous pair of chandeliers which used to hang in the main concourse of Terminal 1. One of them is now in storage whilst the other hangs in the glass museum in St Helens.

The exhibition marks three decades since the photos were taken – which were in turn taken 50 years after the airport’s opening at Ringway in 1937.

Visitors will also get to see what the next 30 years has in store for Manchester Airport.

The airport is embarking on a £1bn investment programme and, as part of the exhibition, a number of old photos have been blended with CGIs of how the new terminal building will look in its place.

Visitors will also be able to find out more about the developments that will see Terminal 2 more than double in size.

Terminal 1, where Baker took her evocative photographs, was opened in 1962 but will be phased out in 2022 and demolished to make was for a new “super terminal” – the merging of current T2 and T3 with a 900,000 sq ft extension capable of handing more than 50 million passengers a year.

Tricia Williams, chief operating officer for Manchester Airport, said: “When we were contacted by the library about the photos we knew it was an opportune time to exhibit them to the public. The photos really showcase the airport and our passengers in the 1980s and how much the airport has changed over the last 30 years.

“As work continues on our transformation programme, the exhibition also gives the public the chance to see what’s to come for the airport.”

All the images are held by Archives+ at Central Library. Click here to see more.