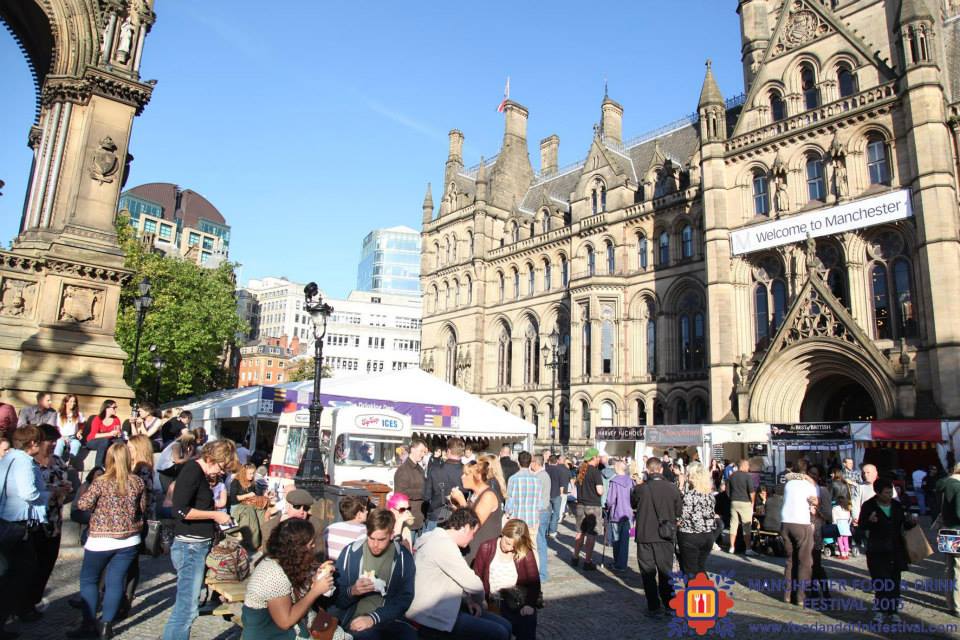 The Manchester Food and Drink Festival is a nationally acclaimed event that has developed to its current level over 17 years.

Conceived and developed by Phil Jones in 1998, the event originated as a means of showing the rest of the nation that there was more to Manchester dining than meat pies and gravy! In the 16 festivals that have taken place over that time, the festival has achieved a national and international status.

2014 sees the 17th Manchester Food and Drink Festival, spanning 12 days from 18th – 29th September, and sprawling across the city centre.

Albert Square will once again be the location for the Festival Hub, with an ever-changing mélange of food and drink taking place across the festival period. It’s a free festival designed for Manchester’s enjoyment – a little foodie neighbourhood built especially for the city, which will stand for 10 full days.

New Festival sponsors Thwaites will be bringing their beautiful brews to the Festival this year as they open MFDF with the Thwaites Festival of Beer. They’ll be creating The Tasting Room – a bar dedicated to the flavours and complexities of Thwaites stonking beer range. This will include the bespoke brewed ‘Use Your Loaf’ Beer – an ale created especially for MFDF by competition winner and beer enthusiast Iain Divine.

A banquet of beer from Manchester!
The festival’s now famous celebration of local beers with more than 100 of the best brews from Manchester served up right through to the Festival finale.

Northern Quarter stalwarts Blue Pig will be bringing an illustrious drinking experience to The Hub, crafted and built especially for MFDF. The Blue Pig at the Hub will be found in the Drinking Den Marquee providing a cocktail hideaway throughout the whole Festival. Expect a taste of all things Blue Pig – carefully crafted cocktails, exotic surroundings and of course, the Blue Pig himself.

The Festival explores South-East Asian culture, as the Festival Hub hosts the majestic Malaysian Market. Taking in the flavours, sounds and smells of South-East Asia, this will be a colourful celebration of the exciting Asian country. Combining delicious food, cookery masterclasses, and entertainment with shopping potential and a vibrant atmosphere, festival goers can expect a real ‘Taste of Malaysia’

Ex-England and Manchester United footballer, Gary Neville will be swapping the pitch for pans when he takes part in a live cook-off. Gary is taking to the stage ahead of the opening of his and Ryan Giggs’ exciting new hotel, Hotel Football. Gary will be joined by the hotel’s executive chef, Brendan Fyldes, and creative director, two-star Michelin chef, Michael Wignall. The team will be giving festival goers an exclusive preview of the delicious food they can expect from Hotel Football when it opens. Gary, Brendan and Michael will demonstrate signature dishes from the hotel’s restaurant, Café Football and attendees will be able to try some of the culinary delights for themselves.

The-popular street food market will return to the Festival Hub. Carefully selected traders from Manchester and around the UK, mixed in with some of the region’s best restaurants, will bring eclectic, magnificent cuisines to the Square – with more than 30 visiting altogether!

Some of the streetfood heroes confirmed include…

Magner’s and Shepton Mallet will be bringing their whole selection of ciders to the Festival in their own bespoke cider bar – plus they’ll be presenting a bonanza of entertainment too with the live music, give aways and lots more fun thrown into the bargain.

Brand Cheese and Chocolate Festival, celebrating two of Britain’s most glorious and gluttonous foods.Cheese, in particular, is one of Greater Manchester’s specialities and the Festival is welcoming a whole host of local makers and traders to showcase their best for you to taste. Stocked with amazing flavours and textures from this region and beyond old favourires will sit alongside a number of new faces too – as the likes of Altrincham’s own Burt’s Blue pitch up in the foodie pavilion.

The sweeter side of this mini festival sees a chocolate adventure camping out in the city centre, the Chocolate Market will feature some of the country’s best retailers selling and sampling their deliciously decadent wares.

The Eat Drink Dance stage at the Festival Hub brings together all of life’s most beautiful things… food, drink and music. Enjoy an eclectic mix of local solo artists, rockin reggae, community choirs and world famous DJs, all washed down with amazing local beers, wines, ciders, cocktails, produce and THE BEST streetfood around.

For the full line up and times please visit the website foodanddrinkfestival.com.

After a hugely successful first year, The Liquor Market returns in the curious and decadent surrounds of Elixir bar on Deansgate. An opportunity to dive into the world of boutique spirits with guidance from the UK’s best brand ambassadors with everything from single malts to rare rums on show. Tickets are £10, which includes a sampling glass and lots of tastings as well as entry into ‘The Liquor Market After Party’ which Elixir will be hosting from 6pm-8pm, serving out delicious canapés to soak up all those spirits.

In its 7th year, the ever-popular Big Indie Wine Festival will be hosted for the very first time by New Century Hall, the events venue for NOMA. The fair is a celebration of exciting, exclusive and boutique wines brought to you by the best independent merchants. It’s a chance to try mind-blowing wines that you won’t find at your local Tesco.

Tickets are £12 with three sessions to choose from:

The Gala Dinner will once again close the Festival with Awards being made in 12 categories. See the website for full details. The MFDF Awards continue to provide the benchmark for excellence in the Manchester hospitality industries.

For the full line up and times please visit the website foodanddrinkfestival.com