Sculptor Hazel Reeves has been announced as the designer who will create the new statue of Emmeline Pankhurst in Manchester. The statue, called Rise Up Women, was chosen from a shortlist of work by six sculptors. Her striking piece of work received both the public vote and the support of the selection committee.

A small-scale model of the design was unveiled yesterday in St Peter’s Square. It features Mrs Pankhurst stood aloft on a chair, arms wide, symbolising the strength of a woman who founded the Women’s Social and Political Union in 1903, committed to the slogan ‘Deeds Not Words’ and was instrumental in women getting the vote in 1918.

A full size statue will be located in the new garden area of the square, subject to planning permission, and will be unveiled on 8 March 2019 – International Women’s Day.

The statue of Mrs Pankhurst will be only the second statue of a woman on the streets of Manchester and is part of the Womanchester campaign to get more.

A longlist of 20 inspirational local women was announced in May 2015. This was reduced to a shortlist of six following a public vote, with the Moss Side-born suffragist coming first ahead of other notable female figures. 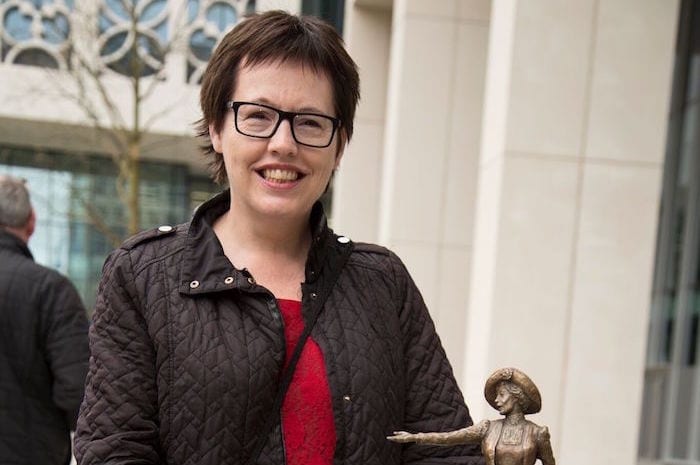 Six sculptors were invited to showcase their ideas.  5,850 people voted in the advisory ballot on the designs, either having seen the maquettes at one of a number of events, or by viewing them online.  1,815 people visited Manchester Art Gallery to see the sculptures too.

“I feel incredibly privileged to be selected to sculpt my hero, and Manchester’s hero, Emmeline Pankhurst,” said Hazel.

“There was tough competition. The response to my design has been overwhelming; Emmeline as the courageous, determined and dignified activist. In 2019 she will be back on Manchester’s streets, continuing to inspire women to rise up and demand their rights. This statue is long overdue, in this city with a rich history of women’s activism.”

As the winning designer, Hazel will also be developing a programme of community engagement with the Emmeline Pankhurst Statue Campaign, which will include educational projects linking to the activities that will be taking place across the city to mark the one hundredth anniversary of the 1918 Act that gave the vote to women over the age of thirty.

“I am delighted for Hazel,” said campaign chair Andrew Simcock. “Since first meeting her eighteen months ago she has impressed me with her passion for women’s rights and gender equality, her enthusiasm for the project and her willingness to engage in the broader educational opportunities that this project will unlock.  We’ve also seen through the public voting process how much her design has touched and connected with people, which is an important part of Emmeline’s legacy.”