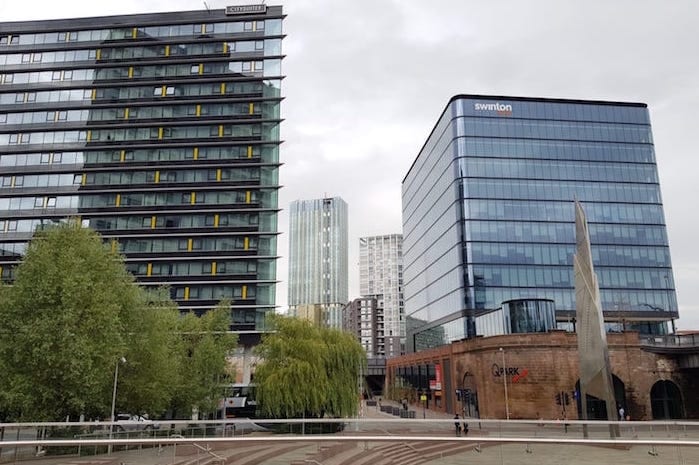 Construction work has started on 100 Embankment, the second and final phase of the transformation of Salford’s booming Greengate neighbourhood.

When the new nine-storey grade-A office tower is completed in 2020, it will stand beside its already-completed sister building, 101 Embankment, in one of the most prominent sites in the city centre, making the boundary between Manchester and Salford even more difficult to perceive.

Diehard Salfordians will probably still cling to the fact that their city got its charter as a free borough in 1230 – decades before Manchester did. But best not to mention the Middle Ages. Here’s why. 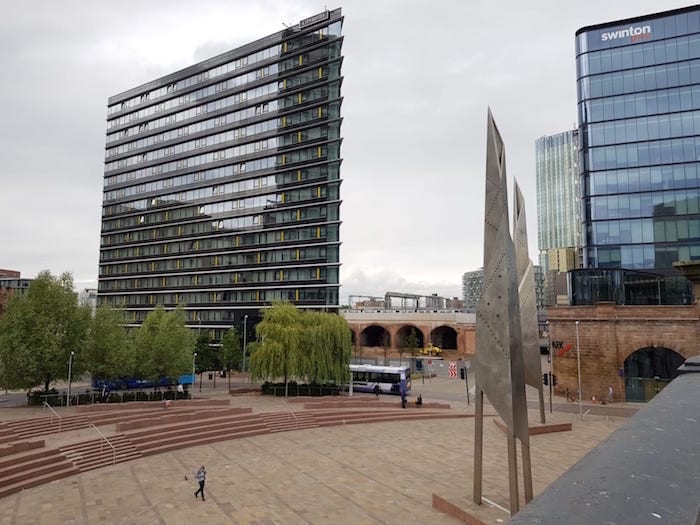 The joint venture team behind the landmark development on the site of the former (Manchester) Exchange railway station has launched a campaign called “100 Reasons” to celebrate the project. One of the key reasons is its location “at the heart of the city’s Mediaeval Quarter”. Manchester’s Mediaeval Quarter, that is. Salford hasn’t got one. Not one that’s survived the centuries, anyway, like Chetham’s School of Music on the Manchester side of the river.

Interestingly, mayor Paul Dennett regards the Embankment site as the “heart” of Salford – a borough that stretches all the way to the boundaries of Wigan, Bolton and Bury. But maybe he does have a point because Salford’s Greengate is miles closer to Manchester city centre than even uber-fashionable Ancoats, never mind Chorlton or Didsbury.

Given the huge expansion of central Manchester, development across the river is not only inevitable, but also logical.

Not many years have passed since it would have been obvious to anyone crossing the boundary between Salford and Manchester that they had entered a different city. With new development now booming on the Salford side, the physical border is increasingly difficult to discern.

And when Salford’s mayor echoes the comments of Manchester city council leader Richard Leese – that the BBC’s decision to locate in Salford Quays rather than Manchester didn’t matter because, in economic terms, it was all the same place – the historic divide is disappearing in the minds of people as well.

The political divide is becoming less and less relevant, especially since the election of Greater Manchester metro mayor Andy Burnham, who exercises sweeping executive powers across all ten boroughs of the city region which includes Manchester and Salford.

To a large degree, Mr Burnham’s responsibilities mirror those of the mayor of London who oversees 32 London boroughs – not one of which, incidentally is called London (the capital’s 33rd administrative district, the City of London, is not a borough). But you don’t get residents of Southwark, Wandsworth, Brent or Bexley calling themselves anything other than Londoners.

So despite Salford’s historical pedigree, 21st Century Manchester is the stronger “brand”. More and more bright young things are putting down roots in the shiny new apartment blocks on the Irwell’s West Bank. But overwhelmingly they do their shopping and spend their nights out across the river in Manchester, catch their trains at Manchester railway stations and fly off on their holidays from Manchester Airport.

And while Salford City are on their way up, they ain’t in the Premier League yet. Then again, Old Trafford is nobbut a cockstride away from that enviable Salford showcase, Salford Quays – conceived, designed and built while politicians in Manchester town hall still considered private sector investment to be ideologically unacceptable.