Manchester’s new electric bin lorries have been named – by you 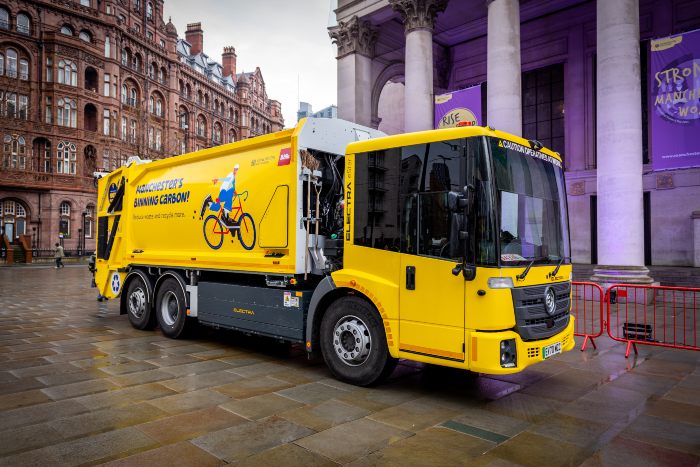 The winning suggestions in a competition to name five of Manchester’s new electric bin lorries have been confirmed.

Around 600 votes were cast in polls to select the most popular of the names submitted – with Sparkus Trashford, Usain Volt, Trashiena, Bin Diesel and Binspiral Carpets emerging triumphant.

The names were confirmed as one of the vehicles was shown off in St Peter’s Square.

The first vehicles will start doing the rounds across the city later this month.

The Council has invested in 27 new electric refuse collection vehicle to replace almost half of its existing fleet.

They will reduce carbon emissions by an estimated 900 tonnes a year as part of a plan to halve the Council’s direct emissions by 2025 to combat climate change.

The rechargable bin lorries, which are replacing diesel wagons, will also contribute to improved air quality. They are operated by the Council’s waste contractor, Biffa.

“I’m sure that Sparkus Trashford, Usain Volt and friends will become a cheery and familiar sight around the city’s neighbourhoods.

“We’d like to thank everyone who suggested a name or took the time to vote in the poll.”

Councillor Rabnawaz Akbar, Executive Member for Neighbourhoods, said: “While the naming competition has certainly sparked Manchester people’s imaginations, we hope they will take these vehicles to their hearts.

“We’re proud that Manchester City Council has made the most significant investment of any council in emission-free refuse collection vehicles and that the waste and recycling service is playing its part in binning pollution.”

Michael Topham, Chief Executive at Biffa, said: “We are proud to be launching the UK’s largest ever fleet of electric refuse collection vehicles and helping one of the UK’s top cities become greener.

“This latest development in Biffa’s longstanding partnership with Manchester City Council marks a significant step forward in supporting the city to halve its direct emissions by 2025 and we look forward to seeing these vehicles in action.”