Backstage with Ed Sheeran: his tips on how to succeed in the music industry

Ed Sheeran has no rituals before he performs but used to drink a lot of water before he went on stage. He stopped because he ‘just needed a p*** the whole time.’

That’s what he told Manchester Music College when he gave them an exclusive backstage interview before a recent gig.

He talked about Glastonbury, Game of Thrones, and what students can do to make it in the music industry.

He confirmed that he will be appearing in Game of Thrones alongside Arya – his favourite character because ‘she doesn’t give a f**k.’

His advice for parents and kids thinking about a career in music? 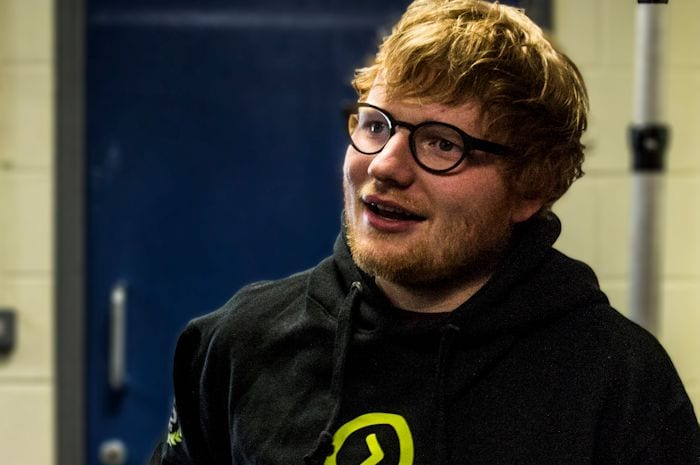 “What I’ve learnt is that anything you want to do, if you put your mind to it, you will eventually get there.”

The award-winning musician is a patron of Access to Music, which is celebrating its 25th anniversary this year. The college has eight centres across the UK with its flagship at the former legendary Jilly’s Rockworld and Music Box nightclubs (aka Fagins and Rafters) on Oxford Street in Manchester.

Ed, who closed Glastonbury headlining the Pyramid stage, studied at the London centre in 2008.

“At the time of me doing the course I wasn’t the best singer or songwriter or guitarist, but being around people that aren’t musical at high school you don’t get much encouragement.

“What I think is great about (Access to Music) for young kids is you’re around kids that want to do the same thing and adults that understand that you don’t have to be the best singer, songwriter or guitarist to start off, but there’s something there to work with.”

Established in 1992, Access to Music provides a wide choice of courses covering all aspects of the music industry and now also offers specialist courses in games design and creative media training. Its music curriculum has been developed in partnership with Rockschool, the UK’s only popular music awarding body.

To date, the college has trained thousands of successes in the music industry including Rita Ora, Jamie Morrison (Stereophonics) and Stephanie May (Head of Music at Virgin Radio).

The Oxford Street centre is a purpose-built facility which has breathed new life into a building where many household names have performed in the past, including Depeche Mode, Joy Division, Lisa Stansfield and Edwin Starr.

It includes a suite of rehearsal rooms, a full-size recording studio, spacious class rooms and a committed performance space (with a capacity of around 100 people).

The college also has a dedicated Games & Media centre on Hulme Street in the converted Chorlton Mill.