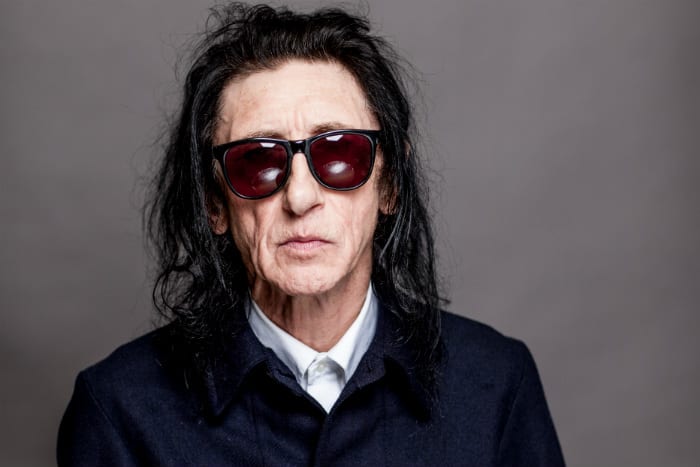 Dr John Cooper Clarke rose to fame as a ‘people’s poet’ in the 1970s, touring with bands like the Sex Pistols, The Clash, and Siouxsie and the Banshees. His poetry has been set to music by the Arctic Monkeys, been featured in The Sopranos and appeared on the national curriculum.

But it all began in Salford.

“Higher Broughton is where I grew up,” he says when I meet him ahead of his gig at the Bridgewater Hall.

“The busiest street corner in the country. Above a chemist, in a badly converted Victorian stucco Italianate villa. It’s not there anymore. The main view was the Rialto cinema.

“I could walk into the centre of Manchester in 15 minutes. So really, my neighbourhood was more inner city than suburban. It was a great place to grow up.”

John developed a love of rhyme through American records he discovered thanks to his uncle – Peggy Lee, Frank Sinatra, Ella Fitzgerald, Bing Crosby – but his love of poetry itself began at school.

“We had to learn poetry Michael Gove-style, off by heart,” he recalls. “17 pages of The Lady of Shalott by Alfred Lord Tennyson. If you were called upon to recite verse five you had to be able to stand up and do it. And you had to do it convincingly.

“I’m right behind Mr Gove on that one. That’s the nature of poetry, it’s the way that crawls into your entire being. You learn the words.

One particular teacher managed to instill his love of poetry in the entire class of teenagers, John recalls.

“His name was John Malone. He had a deep knowledge of the late Victorian romantic poets. A knowledge and enthusiasm that he conveyed to an entire class of unreceptive Salford kids.

“It became a matter of personal pride to start using five syllable words. It became a competitive hothouse of poetry,” he remembers.

“The guys were really competitive. Who could impress the chicks with the most flowery language. Even among these trainee thugs that I shared a classroom with,” he laughs.

John says he always had a knack for rhyming, but that he didn’t realise poetry could be about places like Salford.

“Like a lot of people in the ‘50s, I thought poetry was supposed to be about the countryside,” he says. “A rural pursuit. It wasn’t until I read the American poets I realised it could be about a city. It was a real eye-opener.”

Inspired by the lives of the poets, John thought that in order to be a professional poet he would have to move to London. His role model was Charles Baudelaire.

“I always had in the back of my mind, you ain’t going to make it in your home town. Everybody said ‘forget about it’. So I thought I’d take it to the capital. That’s where the art world lived – that’s how it was then. So I took it to London via punk rock.

“Baudelaire translated the works of Edgar Allen Poe into French,” says John. “He was the citizen poet of Paris.

“And I thought, ‘wow, what a gig’. Imagine being the mouthpiece of that sophisticated Parisian crowd. So I thought, why not Manchester? Why not London?”

John’s trademark look was also influenced by his poet heroes.

“I had an idea of what a poet ought to look like,” he says.

“One that always struck me was a portrait of Arthur Rimbaud drawn in charcoal by Pablo Picasso. He’s wearing a high buttoned jacket and has spiky hair and a sort of bootlace tie. So I guess he’s quite a template.

“I always thought a poet should look a little bit 19th century. But smart. Baudelaire and Rimbaud are my sartorial role models. With a bit of Keith Richards.

“The thing Baudelaire had going for him is he looked like he’d had money, but squandered it. So he’s got great, really expensive clothes but they’re slightly distressed.

“If I could find somebody with the same physique as me, I’d make them wear my clothes for two weeks before I had them. Then I’d take them to the dry cleaners and put them on. Trouble is, I’ve never found a guy with my physique,” he laughs.

John has has now lived in Essex for almost three decades, but he returns to Manchester and Salford regularly, both for work – radio and TV at MediaCityUK as well as gigs – and to see family. He doesn’t feel any affinity for Salford over Manchester, he says.

“Manchester and Salford are interchangeable to me. You can be on the same street and go in and out of Manchester six times. I’ve never figured out where the borders are. The part of Salford I grew up in was pretty much the centre of Manchester anyway, so I don’t feel any particular patriotism. Does that make me a bad person?”

Does he miss anything about the place he grew up?

John tells me he met Jose Mourinho in the lift at The Lowry Hotel last night and couldn’t resist talking to him.

“I left him on an optimistic note: the only way is up. City have got it right now, they’re fabulous. I’m not saying that with a smile on my face. I’ve been a United fan since day one. I used to go and watch the reserves play on a Wednesday, back when games weren’t played midweek.”

How does he think Manchester has changed?

“The city has changed immeasurably over the years,” he says. “It wasn’t always the rock n roll hub that it seems to have become today. It is perceived as a rock n roll city. For good reason – I’ll say it in one word: Wayne Fontana and the Mindbenders.”

If he were growing up in the city now, would he still leave for London?

“That’s a very good question, because it isn’t the same anymore,” he says. “People can get famous without leaving their f***ing lounge now. But I think I would. As Mozza put it in one of his songs, we hate it when one of our friends becomes successful.”

John doesn’t watch other poets perform. “Because what would be the best thing that could happen? They’re rubbish. And I don’t want to be that mean-spirited.

“Good luck to everyone, it’s not easy making money out of poetry. There’s no shortcut. I’ve made a living out of poetry in two ways: gradually and suddenly.”

His advice to young people wanting to get into it is to do gigs.

“Poetry is a phonetic medium. It should always be heard. Learn it by heart and recite it. It’s not there to live in a book.”

But he doesn’t refer to himself as a performance poet.

“Where’s the performance? I’m reciting poetry. I’m not tap dancing or juggling with chainsaws or walking on a f***ing tightrope. I’m reading poetry out of a book so you don’t have to.

“But I do think you owe it to your public to look nice. Dress carefully. There’s good advice.”

John shows me his new book of poetry The Luckiest Guy Alive – his first in over three decades.

“Some of it is extremely recent,” he says. “But some is stuff I’ve been road testing for the last five years, and some is older than that. It’s 32 years since the last book I had out. I think it’s a great selection.”

Does he find it easy to write?

“Every masterpiece is built on a pile of garbage. You’ve got to put the hours in. But sometimes they write themselves,” he says.

“I don’t rely on inspiration, that’s for amateurs. It’s a romantic idea, but the truth is rather more prosaic. What’s another word for thesaurus? But sometimes inspiration does strike. I have lots of poems built around one line. And I have found myself scrawling lines on the back of fag packets in time honoured tradition.

“My hours are pretty loose, but I write in the morning until it’s martini o’ clock. But I’m like the police. I’m never really off duty.”

How does he prepare for gigs?

“I don’t have to do anything special in terms of psyching up. But five minutes before I go on, I sing that song Granada. That goes through every mood required. If you can get through that song without having to start again, you’re firing on all cylinders.