Cold water shock can kill – don’t cool off in the Quays this summer, locals warned 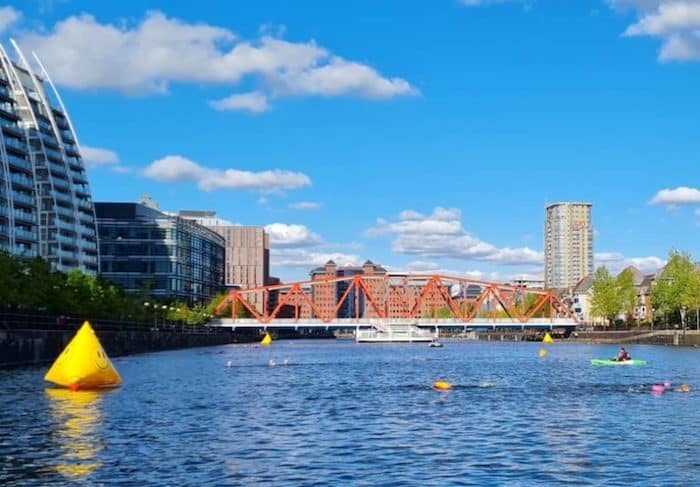 “Cold water shock can kill you. Don’t jump into open water,” say Salford-born triathlete, Danny Hill and police diver, Gareth Olley, delivering a stark message to anyone who thinks they can cool off in the Quays this summer.

Danny, 31, grew up in Salford and now lives in MediaCity.

A keen and confident swimmer as a child, he remembers saving the life of his friend when a group of them went swimming in the Quays aged 14.

“But my friend very nearly did and I won’t ever forget it.”

Gareth Olley is a police officer who works for North West underwater search and marine unit and has recovered the bodies of young people who’ve drowned in open water.

His message is clear: “It’s not safe to swim where there is no lifeguard on duty or where it’s not set up to safely go swimming.

“The initial dangers are what’s beneath the water that you just can’t see.

“All kinds of debris can potentially lie under the surface like scaffolding poles, trolleys, bikes which can cause harm and trap you under the water.”

Gareth continues: “the biggest misconception is the temperature of the water.

“I’ve known Olympic swimmers when put into a cold water environment, who physically cannot swim because of the freezing cold temperatures and what it does to your body.

Danny adds: “Cold water shock is real. The body goes into shock, you can’t breathe and before you know it your lungs have filled up with water and that’s how you drown.

“As an athlete I have trained in how to breathe and use techniques I have learned to acclimatise myself to cold water when I’m competing.

“If you want to try open water swimming, join an organised group and learn how to do it.

“Don’t just jump in the water on a hot day to cool off. It’s deadly.”

Councillor Barbara Bentham, lead member for environment, neighbourhoods and community safety, said: “We’ve seen far too many families shattered by tragic drownings when people have gone into open water to cool off.

“Please stay out of open water and stay safe.”

MediaCity is joining Salford Community Safety Partnership in its campaign to warn of the dangers of open water this summer.

Not only is jumping into and swimming in the Quays outside organised, supervised sessions dangerous, it is also illegal to do so. Under 18s identified as jumping from bridges will receive a police warning, delivered to their home; over 18s will receive a £100 fixed penalty notice.

Extra CCTV cameras, police and council patrols will be monitoring the Quays this summer.

Open water remains cold even on the hottest days, and as soon as you enter cold water you will gasp and breathe faster – cold water shock is an automatic reaction.

Gasping and breathing faster increases the risk of getting water in your lungs and drowning. That risk increases if you’ve jumped in from the side or a bridge – and if you hit the water badly it’s like slamming into concrete.

Cold water shock can make you panic, and the cold water quickly numbs your muscles, making it harder to swim and rescue yourself. It can also cause heart failure even in young people.

To encourage young people to stay safe and keep away from open water this summer Salford City Council and partners are offering summer holiday activities for four to 16 year olds and they are free for children receiving free school meals. See salford.gov.uk/summerfun for details of how to sign up by Wednesday 20th July.