Review: Dirty Dancing brings the hit film to life – and the audience love it 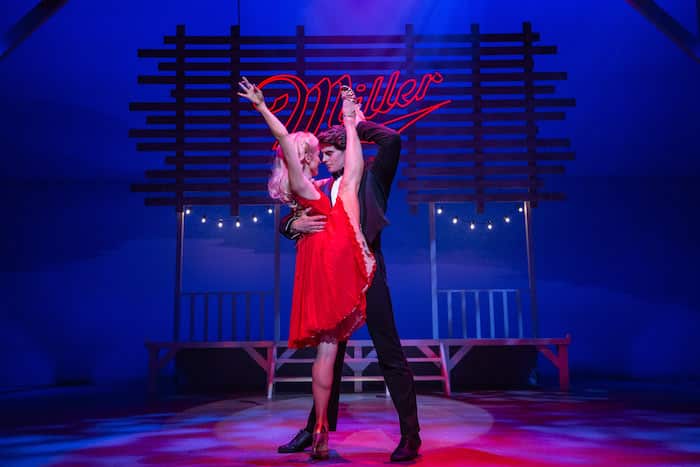 We're treated to the lifts, the ‘finger clicking’ finale and the movie montage training scenes - and there is something magical about it
Share
Tweet
Share
Chat

You cannot start a theatre review without acknowledging just how amazing it is to be sat back in the stalls with a live audience.

Netflix has done a fine job babysitting us all over the last 19 months. But there is no better time to get back into theatres, gig venues and cinemas, if you can.

Just hearing other people enjoying themselves, in place of the phrase “you’re on mute”, is so refreshing and life affirming.

If you have missed the sound of the crowd, then you will hear them many times in this stage adaptation of the hit film Dirty Dancing, which starred Patrick Swayze as the dance teacher that Jennifer Grey’s character (Frances ‘Baby’ Houseman) never knew she needed.

This Palace Theatre show is not an opera or Shakespeare, so the audience become as much a part of the show as the cast.

Michael O’Reilly plays bad boy Johnny Castle and Kira Malou is Baby. Think back to when Michael Hutchence dated Kylie Minogue, and you get the picture.

Girl next door is awakened from her studious slumber by the rough and ready tall dark stranger and now she can’t get him out of her head. It’s Grease meets Strictly Come Dancing, with some messages about Civil Rights thrown in for good measure.

The show comes alive when the leads and the ensemble are dancing. So much so that on the night I attended, dialogue-driven scenes are drowned out by shouting, whooping, cheering and the sounds of seats flipping back as people take the opportunity to visit the toilet.

Lines from the film have become iconic for fans, who probably wore out their VHS copies so much that it would take more than a big souvenir pencil to wind the tape back in.

These lines are all present and correct here, as the show slavishly recreates key moments from the film.

So, the audience are treated to the lifts, the ‘finger clicking’ good finale and the movie montage training scenes. But there is something magical about it all this time around because we have been locked down and unable to experience a live stage show.

Kira Malou steals the show as Baby, the spoilt innocent girl who cares about key issues even when her head is turned so much she resembles Linda Blair from The Exorcist. Her comic timing is excellent and she plays it just right, without overdoing it.

Michael O’Reilly has a tough job because clearly no-one in the audience has come to hear him speak. When he dances, he almost seduces the audience into submission and silence….almost.

On the night I attended, it seems some audience members think we are still in lockdown, so they give the show a Gogglebox commentary from start to finish.

Carlie Milner causes a commotion as Penny Johnson – a young dancer in trouble. She delivers far more than is on the page and this role could really do with being expanded, as she is the heart of the piece.

When she dances, you feel more than alive. If I had a paddle board handy, it would be a 10 from Glenn.

Amber Sylvia Edwards and Samuel Bailey provide what are essentially filler songs in the background. But their voices and stage presence are incredibly strong, so again they should be front and centre a bit more.

The ensemble and supporting cast give more than they are asked to, and there is energy on display here because of their hard work and passion.

Kellerman’s Band may only be three people strong but they perform like a group, stirring the audience out of their movie memory filled haze and back onto the stage.

If you are after a quiet show, this is not it. There is more chitter chatter here and shouting than in a full on ‘audience participation welcomed show’ like Rocky Horror.

And to be honest, there are times when this takes you out of the show and back into your living room and reminds you of Boxing Day when a relative decides to talk through an entire film. Any emotional connection to a character or situation is then lost or forgotten.

But the show is neither a musical or a play. It is a replay/rehash of a beloved film, so the audience feel as if they own it.

And nobody puts them in a corner.

Dirty Dancing is at the Palace Theatre until 2nd October. Tickets are available here.